I thought I would share the creative process of making a special miniature inspired by the now -classic Saving Private Ryan movie. It was done as a fun project for myself to celebrate the release of the first FOW D-Day book and it seemed fitting to honour Tom Hanks in his role as Captain John H. Miller. So, I decided to make my own Captain Miller. One of the most memorable scenes for me was towards the end, when he is, in a final act of defiance, shooting at a Tiger tank with his pistol! 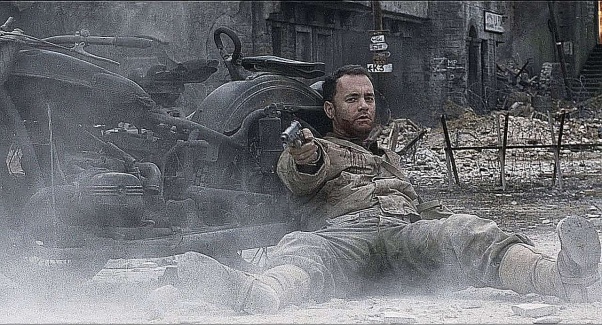 Since I had been digitally designing Americans from that period, I already had the basic clothing and equipment.  I had to pose it as close as I could to the scene here and make some of the other equipment he is wearing. Funny part, I also put some blocks in the back to substitute for the motorbike just to get the height and pose right. I take every piece of gear I have, make it fit onto his body and mimic how it would behave on an actual human. Some of the details are made slightly over-emphasised so they will cast well and they can be painted by us.

Our soldiers have a slightly larger heft due to the demands of the 15mm size. If I am making miniatures for manufacturing in different materials I will have to make some changes when it comes to facial structures and emphasis, density of folds on the clothing because I can’t only go for accuracy, I also need to make sure when we get the final product it will take paint well, and there will be plenty of details to paint. . Accuracy and attention to detail is our primary concern and we always try to pull out the most amount of detail that we can with the scale we are working on and the end material. When I see  our products that you guys build and paint I am always blown away. Least I can do is show you respect by doing the same when I am designing these for you. 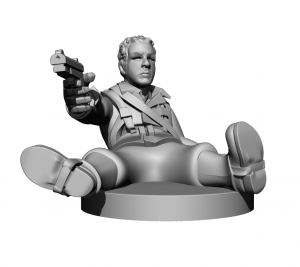 I took a little bit of liberty since it is inspired by the movie and not exact reproduction, and tilted his head back, and raised the pistol. This was done simply to make him look cooler and even more defiant. At this stage there are no details on the character yet, only the fold at the belt, and distortion on the webbing in the stomach area. These come in later. I already did some work on the face too. The amount of detail I am adding is way more than usual since something like a lip would be less than one tenth of a millimetre thick!

Slowly by adding detail, distortions, folds,  we are getting closer. His left leg is slightly further extended and raised in the scene, but I wanted no empty space under his left knee and flat on the platform. I made a satchel, added the grenades, muzzle, ammo pouch and then detailed them. You can never completely finish something at this stage, personally I could fiddle with it into infinity finding small little details like pant folds and imperfections to add, not to mention the face.

I do the smart thing and leave it as it is. 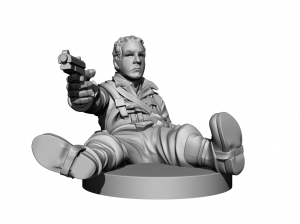 Final result in all of his glory. I greatly enjoyed making him and I am happy with how he turned out, let me know what you guys think!

with Pete the Wargamer

in the Auckland Studio

Andrew and Wayne are locked in deadly combat in a breakout mission. 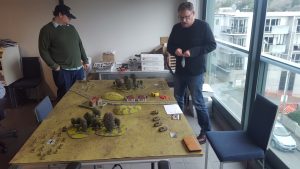 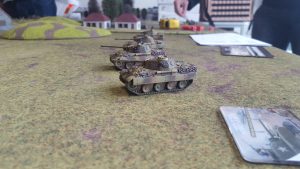 Chris is setting up to defend himself against Phil’s airborne landing. 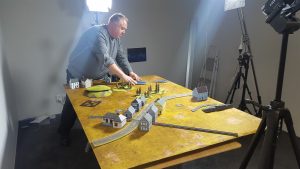 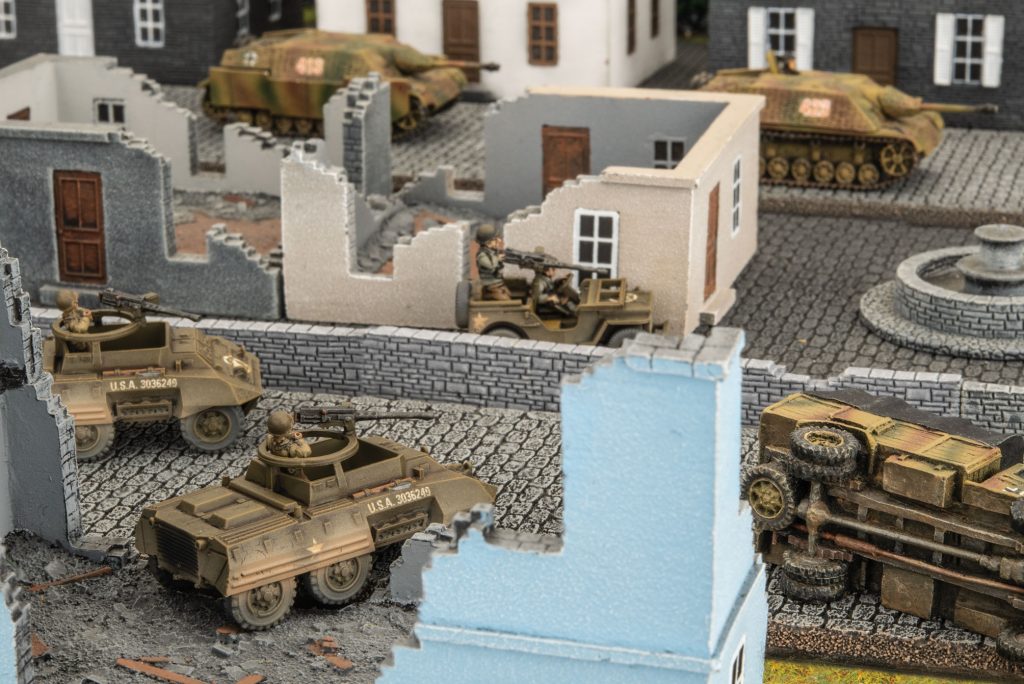 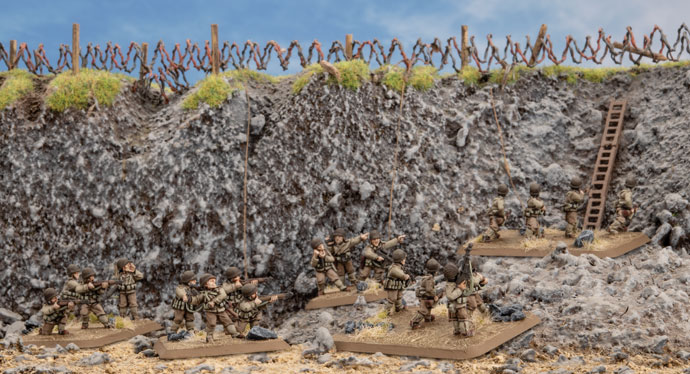 with Wayne and Andrew

Wayne and Andrew fight on the beaches of Normandy.

The 29th Boat Assault Company have been near and dear to my heart since they first arrived years ago in the Bloody Omaha book, at that time I leaned heavily into numbers over elite units so it was an easy choice for me between the 29th and the Big Red One.

The US Assault Company is a unique Infantry company that has a mix of specialty weapons from Bazookas to Flame-Throwers, this unit has a weapon for every occasion. Along with this unique composition you have access to lots and lots of units in one formation. Having access to six core infantry units is a key aspect of this list.

Before getting into the list let’s look at what you get in a unit. For nine points you get:

As a bonus you can replace one of your Bazookas with M1919 LMG at no cost.

The version of the Assault Company I am running are Confident, Trained, and Aggressive. They also come with the Blood n’ Guts trait that gives them a 3+ to rally, that will keep my units moving forward. I could go with the Big Red One elite option, but the 29th is who I want to play. Since I am going for the cheaper version that is easier to hit, it is important then to make sure I have the numbers to absorb losses more easily.

To this end I am going to take 5 units of the Assault Boat Sections, adding in the HQ  and M1917 Machine Gun platoon that gives me an even 50 points. I am choosing to leave the 2 Bazookas in each unit instead swapping any for the LMGs. I don’t think those units need the rate of fire since I am going to run two units of the Support Boat sections with the M1917 Machine Gun platoon for 5 points a unit, and I have a unit of M1917 guns. Adding in those units brings me up to an even 60 points.

Next I want to add some artillery; this will be simple as I already have loads of small one gun templates, so adding a full strength mortar platoon for 6 points would be ideal. 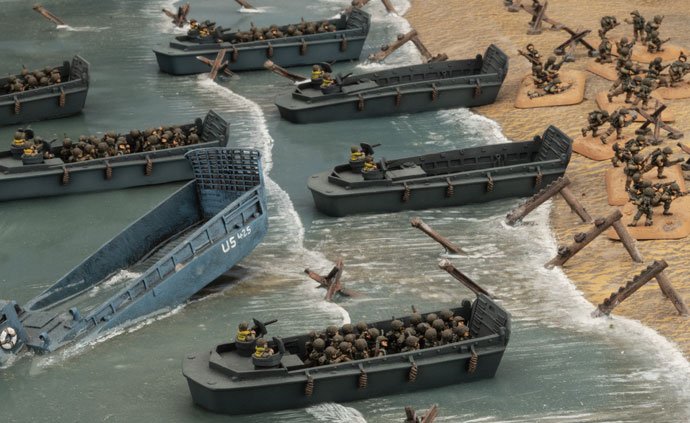 So right now my army comes to 66 points and I have 10 units in my formation, so it looks pretty solid and I have enough artillery and machine guns to deal with most infantry lists I come across. I do feel that I am relying too heavily on my Bazookas to take care of all the tank threats that may be in the game.  To cover this weakness I decided to look in the book and see what I could get for 34 points tank wise. I quickly landed on M10s, as those give me 8 AT 12 tanks, and the downside of not being able to deal with infantry is covered by the rest of my list. An HQ and two units of 4 M10s comes to 34 points exactly, giving me a full 100 point list with 13 units- seems good on paper.

Now the list has some Achilles heels, I have no dedicated anti-air units so air-power can be quite effective against me. I am also weak against light tank lists, like a Stuart company. At a 100 points you can get 50 of them and at those numbers they will swamp me, my M10s don’t have enough shots to kill them all and the Stuarts AT is high enough to kill an M10 even when hitting front armour. But no list can cover all the bases and even against light tanks and air-power I will have a fighting chance, as I do still have loads of bazookas and my M10s have self-defence AA.

As a list this works really well- it’s easy to split it up when figuring out reserves and it is flexible with the ability to both attack and defend quite well. On the defence you place one Assault Boat Section and Support Boat Section on each objective, freeing the rest of your force to be placed in such a way that they can delay and assault the incoming enemy models.  On the attack I would focus one objective, soften it up with the loads of artillery templates this list has and band all my infantry together and swarm the weakened objective. I will use my HMG and tanks to threaten any reinforcements to the attacked objective while also proving much needed fire support to my main attack.

Well, I hope this gives you an idea of how you want to build your beach landing company. Perhaps you want better quality of troops instead of numbers by swapping out the 29th with Big Red One, or maybe you do have a Stuart player in your area and you want Shermans instead of M10s. I highly suggest tweaking your lists to fit your local m eta and your playstyle.

Well that’s it until my next List Tech, hope to see you on the battlefield. 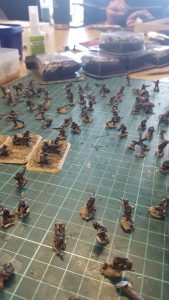 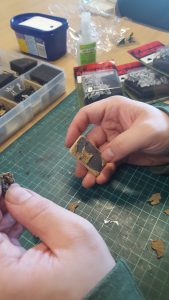 Andrew is rebasing his Beach Assault Sections to add some fresh sand to the base and pop those flamethrowers on small bases. 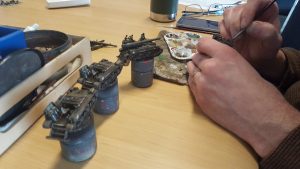 Mike has come to join us for the launch and is touching up some proper big boy guns. 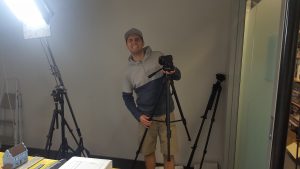 Patch, happy as ever, is setting up the lighting to record a throw down between Phil and Chris…