The new World War III: West German book brings to the table another wonderful model, we are talking about the Marder 2. Despite the fact I only play East German at the moment I will be buying this model, I love it! The Marder 2 is a German-built second generation of Armoured Personnel Carrier (APC) and can be compared to the American Bradley or British Warrior.

The decision to develop a new APC for the West German infantry was decided in 1979 when the Leopard 2 entered service. The High Command was looking for a vehicle faster than any main battle tank, with a better gun, improved protection, and could transport 7 men. The contract was signed in the mid-1980s but field trials only began in 1991. The Marder 2 IFV planned to enter service at Bundeswehr in 1998 and replace the old Marder 1, but, with the end of the Cold War, the vehicle was no longer needed so was decommissioned due to funding problems. However, I think it’s safe to assume that things would be different if the Cold War went HOT!

The Marder 2 was equipped with a stabilized Rheinmetall MK 35/50 Rh-503 twin-calibre automatic cannon. Curiously this gun had an interchangeable barrel mounted on a universal breach and can be fitted with either a 35mm or 50mm calibre. Thanks to the thermal channel and the laser range finder the gun would be effective both at night and at long distances. The gun could use both APFSDS-T and HE rounds with a ROF of 400-177 rounds per minute, depending on which barrel was used. The Marder 2 armour was supposed to stand a 30mm AP round from the front and 14.5mm round on its sides, this was achieved through modular passive armour bolted onto the hull. Bringing the weight of this monster to 43 tonnes, which is heavier than the initial production of the Soviet T-72! A big tank needs a big engine and the MTU MB-883 turbocharged diesel engine with 1000 hp, provided the necessary power to meet the speed objective, allowing them to run the Leopard 2 off-road.

Here we go, guys! Let’s have a look at how Marder 2 appears on our battlefields. West German has the best NATO troops and the Marder 2 isn’t an exception. They have a wonderful hit rating of 4+ making them extremely hard to land hits on (this is probably one of the best advantages of NATO) Embarked infantry will very appreciative! They also have a 3+ Skill that almost guarantees orders like Blitz and Shoot and Scott. 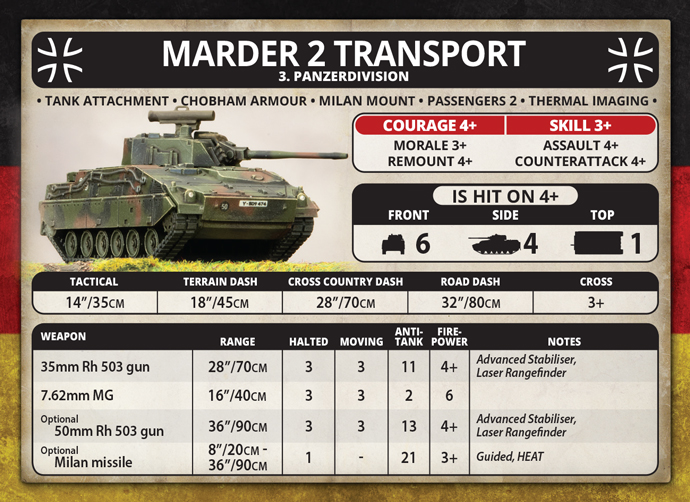 The Assault and Counterattack ratings are interesting with a rating of 4+. Usually, this kind of unit is pushed back by defensive fire so attacking isn’t always the best decision. Thanks to Chobham Armour that guarantees good protection against Heat weapons the Marder 2 is different, with a side armour rating of 16, it will definitely be a challenge for infantry units to engage, especially if they have suffered some losses or are pinned down. So look carefully at the Assault and Counterattack rating. The moral is the standard West German one of 3+ except for the Remount value of 4+ that makes remounting after being bailed out slightly more difficult, however, they should be protected by their hit values. The Marder 2 still has Thermal Imaging for the night fighting and may mount an infantry-carried Milan and two infantry can mount on the vehicle (same as Marder 1).

The standard Marder 2 weapon is the 35mm gun, it’s extremely effective and has a ROF rating of 3 both stationary and moving. This is impressive especially if you have to manage a Soviet swarm like BMP and BTR.

Advanced stabilizers allow the Marder 2 to move fast until 14” and still shoot like a Leopard 2. The range is an incredible 28” that makes them effective at long range thanks to the laser range finder. If math is not an opinion you can move up to 14” and shot at 28”, which means you can hit a target within 42” from your starting position. With an anti-tank value of 11, you have enough power to properly penetrate any second-generation IFV, and any shot that penetrates enemy armour will be very effective with a firepower of 4+. If you feel that 11 is not enough for what you intended to do with your Marder 2 you could consider upgrading to either a 35mm or a 50mm gun. This gives 2 extra points of anti-tank (13) for just 1 point. No other characteristic change, just the opportunity to penetrate more armour. Speed is another important element of Marder 2. The tactical speed is 14” (the same as the Leopard 2) this means they’ll be able to follow the West German main battle tank while shooting . Terrain dash is less impressive, with 18” on the Terrain Dash, 28” on Cross-Country dash, and 32” on Road Dash the Marder 2 is a little bit slower than the leopard 2. That shouldn’t be a big problem thanks to great tactical movement and the long-range options. The Marder 2 has many advantages if compared with the Marder 1, this obviously doesn’t come for free. The same Panzergrenadier Zug with Marder 2 costs almost 50% more than one equipped with Marder 1. 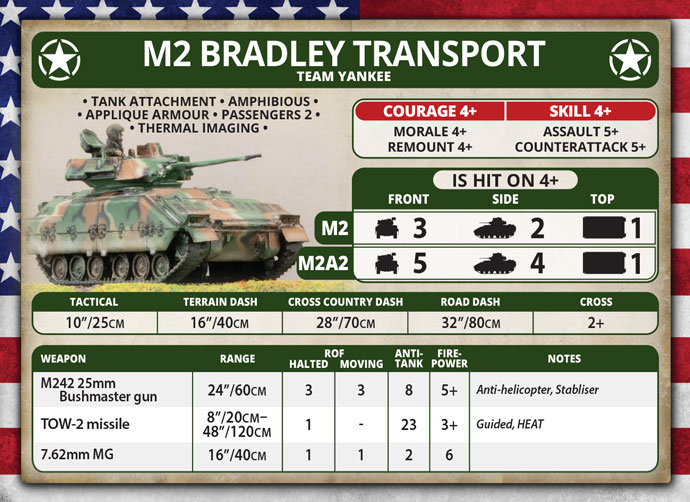 Apart from skills and morale that are determinate by the nation, the first thing to note is that it has less protection than the Bradley. With the M2A2 version, the front armour is only 5 against the 6 of the Marder 2, side armour could seem the same but it’s just an appearance. Because the Bradley only has Appliqué Armour (that guarantees side armour 13 against HEAT weapon) instead of the super effective Chobham Armour (that guarantees 16). Have a look also at Assault and Counterattack values, the Bradley is not as effective while assaulting. Movement is another big difference with the American counterpart as it’s slower on tactical movement (which is the most important in my humble opinion) and similar in its dash movement. The main Bradley weapon is the 25mm Bushmaster gun, that have the same ROF (both halted and moving), but is less effective with a range of only 24”, an anti-tank of 8, and firepower of 5+.

The gun has a Stabilizer instead of an Advanced Stabilizer and lacks a laser rangefinder, at least the Bradley can shoot at a Helicopter, where the Marder 2 can’t. The advantage of the Bradley is without any doubt the TOW-2 missile with an anti-tank 23. The Marder 2 can only mount the Milan missile, which is usually quite effective. 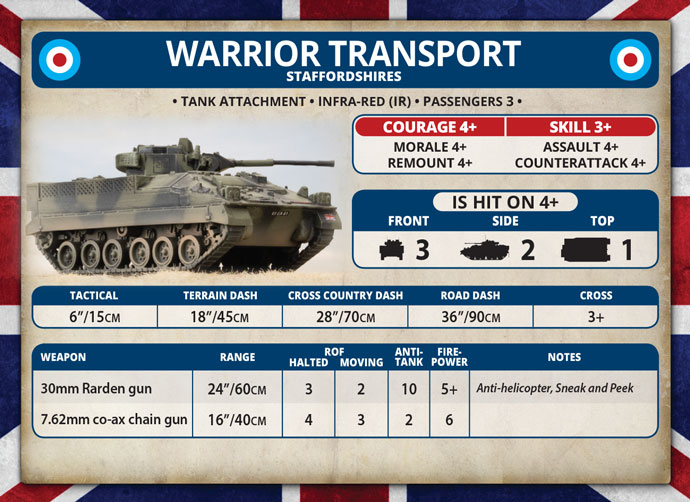 The British Warrior appears similar to the 1st generation IFV if you compare it to the Marder 2, despite that it can carry up to three infantry bases. It lacks any sort of protection against HEAT rounds and only has Infra-Red instead of Thermal Imaging. This makes the rating of the Assault and Counterattack less attractive as any infantry will be able to push them back with defensive fire due to the poor side Armour of 2, also, the front armour isn’t impressive, it’s half of the West German one unless you pay for the unarmoured version. Tactical speed is the other big difference between the Warrior and Marder 2. The British one can only move and shoot at 6” while, as we know, the West German one can do the same things moving at 14”. The weapons are the 30mm Rarden gun which has less range, less anti-tank, and less firepower. The Anti-Tank rating is honestly quite similar to the German one but the difference of one point on firepower is very important. Like the Bradley, the Warrior lacks a laser rangefinder but can shoot at helicopters. 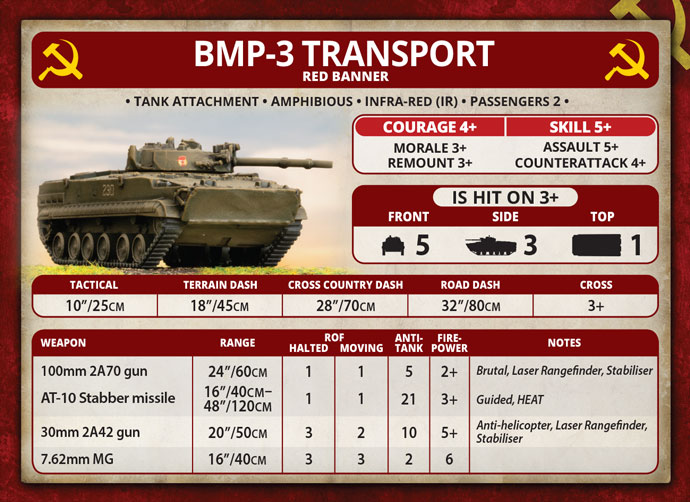 The comparison with the Soviet BMP-3 is the most difficult because the warfare of West German is exactly the opposite of the Soviet one. The  West Germans are an elite force that must be very careful not to expose themselves to their opponent (they are so expensive!) while the Warpact plays like a swarm, with tons of tanks and infantry moving to the opponent. The IFV characteristic represents this style. The BMP-3 doesn’t have any protection on the side with a rating of 3 (however it’s enough to manage 12.7mm) and the front armour is slightly lower than the Marder 2. The speed of the BMP-3 is the most common with a rating of 10” and they have similar ratings for dash movement.

The BMP-3 has a lot of weapons, the 30mm gun is similar to the Warrior one but only has a range of 20”. At least it has a laser range finder that helps. The 100mm gun is definitely not as effective against tanks or IFV due to the poor anti-tank rating of 5 but is useful against vehicles with an armour of 0 and dug-in infantry thanks to firepower 2+. It also has Brutal which helps not only against infantry but also against unarmored vehicles. Laser rangefinder helps at long range, but don’t forget that the range is 24”. The best BMP-3 weapon is the Stabber missile that can be shot while moving. This means that they can move from a hidden place and shoot their anti-tank 21 missiles. This mix of weapons (missiles for tanks, 100mm gun for infantry, and 30mm gun for IFV) makes BMP-3 more flexible than the Marder 2, but the difference of rating and playstyle doesn’t allow us to make a real comparison.

Marder 2 in the book 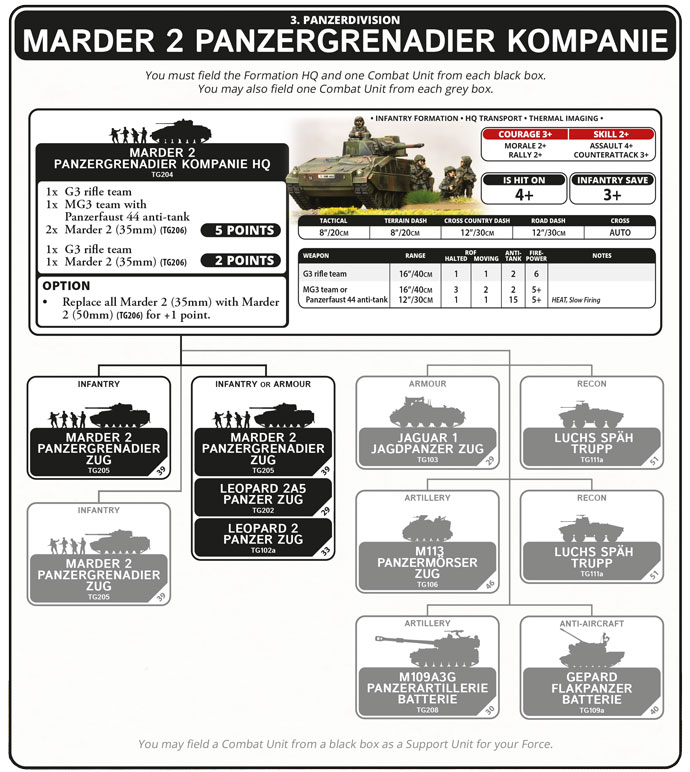 The reconnaissance slots are composed of up to 2 Luch platoons, which are great to have as a cheap recon unit to make use of the spearhead movement. There are two different artillery slots in the formation. M113 Panzermorser is the cheaper option to bring on the table some smoke and an artillery template to manage red hoard. But you can also deploy something better, really better, and more effective. The M109A3G is another new entry in the book. This is a west German-made conversion of the American M109. The barrel upgrade allows it to use special ammunition variations. Yes, that means bomblets. This new version is a little bit more expensive than the older one but also has a better antitank rating of 15 at direct fire if someone comes too near. If you feel you need some more anti-tank (you never have enough) the Jaguar 1 is the best option to bring some anti-tank 23 on the table. Personally, I love them thanks to the Forward Defense special rule they can also be deployed on the table with another tank unit. The last slot is a must-have slot. Gepard is the perfect solution to manage both enemy aircraft and enemy IFV. They’re cheap and effective you can’t deploy any West German formation without them.
Last but not least the Leopard 2A5 or Leopard 2 option I have already mentioned. You can choose one of them instead of the Marder 2 Panzergrenadier Zug. Usually, it’s a good idea but they aren’t cheap and will force you to make some tough choices.

And that’s would probably be my Marder 2 formation: 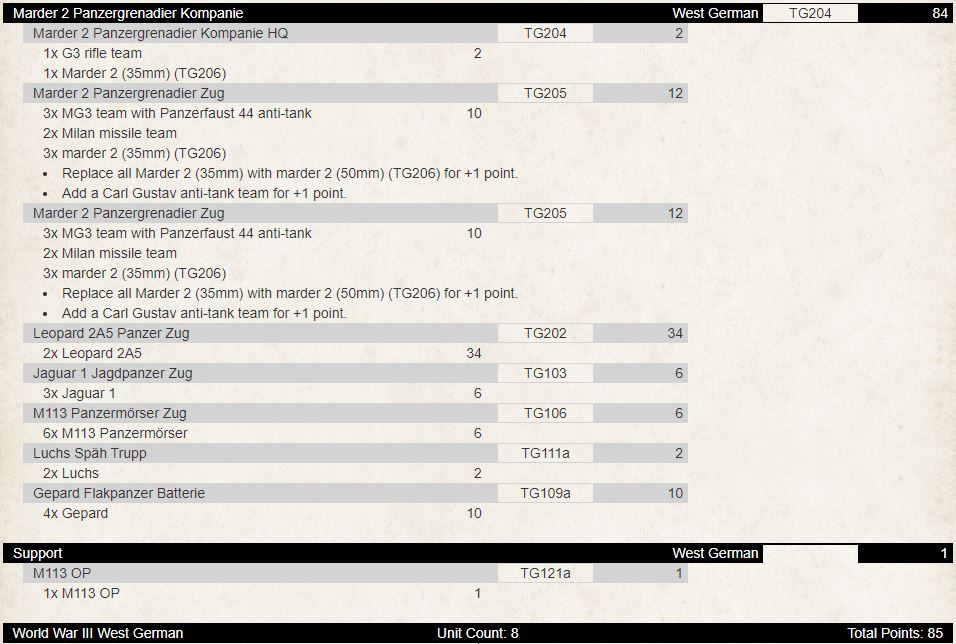 The list is quite short, as expected from a West German elite formation. The infantry is supposed to sit on the objective and resist the Red Hoard thanks to the Milan and Marder 2 support. The Jaguar will wait to ambush against a heavy tank formation while the Leopard 1 stays behind as a mobile reserve against fewer armoured tanks. The Gepard could also be an option for an ambush as your opponent is playing a BTR-60 swarm. Aircraft should be properly managed by Gepard so Leopard 2A5 will dominate the field, fearing no enemy tanks on the front. Luchs will lead the spearhead in mobile battles like Counterattack, maybe followed by the Leopard 1. I would also really like to add some M109A3G but I feel that a cheap tank unit is more important for this list. However, 6 M113 Panzermorser should help against infantry, especially with the help of M113 OP.

I can’t wait to assemble the list and play it on the battlefield!