The American Armoured Rifle Platoon (ARP) has pretty much become a staple support unit for my US armoured lists. It’s a highly versatile unit that’s good on the offense and defence. One of my favourite aspects about the ARP is definitely the bazookas, bazookas and more bazookas. This single platoon packs enough firepower to make any opponent think twice about assaulting it or being assaulted by it. At 19 points a full ARP is not cheap though, so when I heard the new American Bulge book has Battle Weary ARP options for fewer points, I was quite intrigued. 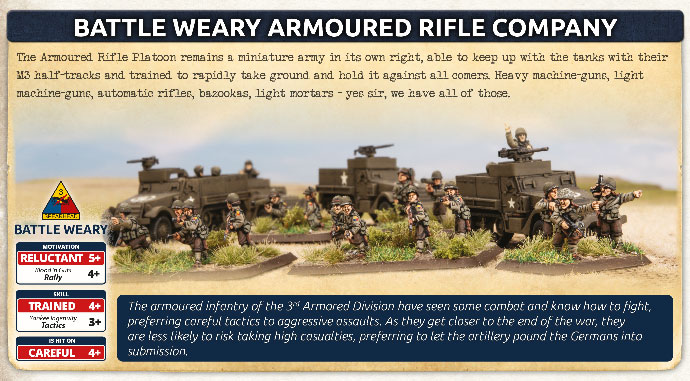 The new Battle Weary ARP opens up new possibilities for your US Force by freeing up points to spend on other options such as the new heavy hitting Jumbo’s, Easy 8s, Pershings and so much more. The challenge with adding costly tanks to your list is that you have to give something up, but with the new Battle Weary ARP, the trade-off seems to be minimal. The ARP maintains nearly all of its valuable stats, but for three fewer points per platoon. While their Motivation goes from four to five, they have a Blood n’ Guts Rally of four. So while they may be reluctant to jump in the fight, they are just as willing to stick around as the more costly Veteran ARP. There’s also an option that saves six points by removing the halftracks.

Let’s say you want the halftracks for offense, the three points you save can be used to bolster the strength of your M4 Shermans. There are many options, but for example you could upgrade to a Jumbo for three points or add an Easy 8 and upgrade a 75mm to a 76mm. That’s enough firepower to tie down enemy armor and draw fire away from your vulnerable halftracks.

Defensively speaking, I think this is where the Battle Weary ARP is going to be most valuable. For just 13 points you can defend an objective with six infantry stands, five bazookas, two LMGs and a mortar while your remaining force goes on the attack. It should take your opponent a lot more than 13 points to push the weary ARP off of the objective. There is a lot you can do with six points you save with an American list. A platoon of two Pershing’s only costs four points more than a platoon of three 75mm M4s and then you have two points left over to upgrade a 75mm M4 to 76mm Easy 8, or a ton of other choices in the new American Bulge book!

It seems like the new Battle Weary ARP allows you to still pack a serious punch with your infantry without sacrificing too much in terms of unit stats. The lower costs will free up points for the new, more costly, heavy hitting tanks or other new unit options. I’m very anxious to see if the reduced cost outweighs the lower Motivation and I’m looking forward to testing out the Battle Weary ARP in my upcoming lists.