I have been a long-time lurker on the Flames of War and Team Yankee pages but being a poor student with no time (or money), the thought of one day building a collection of modern vehicles has always been on my mind. After discovering and promptly investing in Tanks: The Modern Age at the beginning of last year, I very quickly decided that I wanted to collect a small West German force out of a love of the Leopard 2 and the PAH. I bought the WWIII: Team Yankee rulebook a few weeks later deciding I would collect some small armies to play games over lockdowns with some of my mates.

Fast forward a few months, one lockdown and one job interview later and I found myself in Auckland making videos for the D-Day: Waffen SS Live Launch! As an enthusiast in the hobby, the office was quick to discern that I was interested in West Germans, and a couple of boxes would find their way onto my desk along with a sneak peek at the new WWIII: West German book that was in the pipeline. Over the next few weeks, I began list noodling and deciding how I wanted to paint up my new toys. I was determined not to do the standard NATO three-tone, and was looking around for inspiration when I came across this image on the Tanks Encyclopedia:

The Finnish Army purchased 124 Leopard 2A4s from surplus German stock in 2003, replacing the aging T-72 and T-55M. The camouflage pattern stood out as unique but not too difficult so I decided to have a dig around and see what else I could proxy into a Finnish army. The next big find had to do with Finnish AA. The Marksman AA system, currently an option for the British forces, was actually only purchased by the Finns and mounted on T-55AM chassis as the ITPSV 90, before recently being mounted on Leopard 2 chassis to provide a more mobile and stable firing platform. I can very easily proxy these as Gepards so I picked up a box of Chieftain Marksman and some spare Leo 2 and T-55 sprues from around the office. 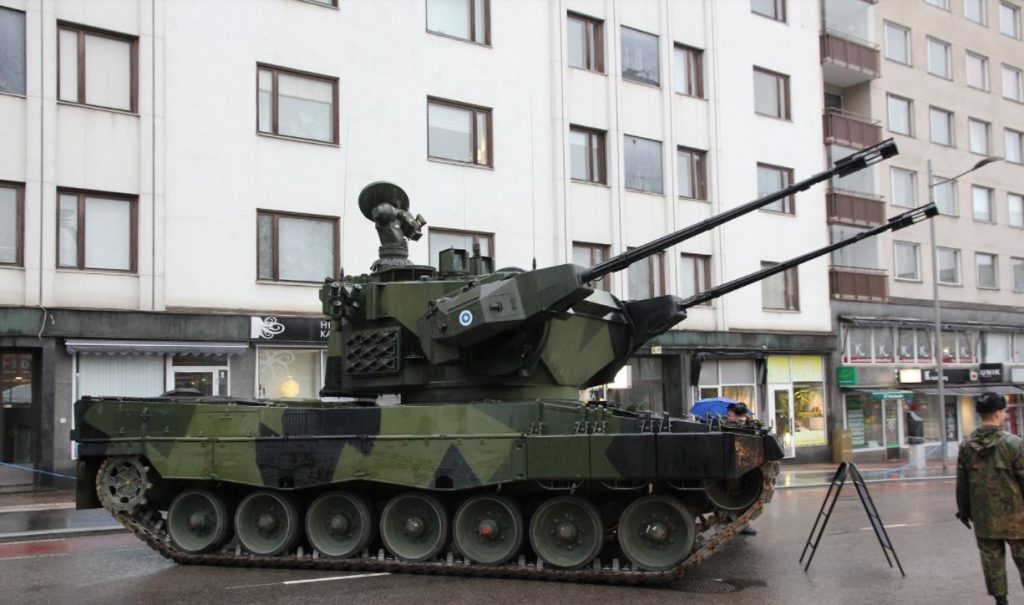 The Finns also currently deploy the 298 RSRAKH 06, the 227mm MLRS system. This has been upgraded to fire the ATACMS missile, and visually there are very few differences. 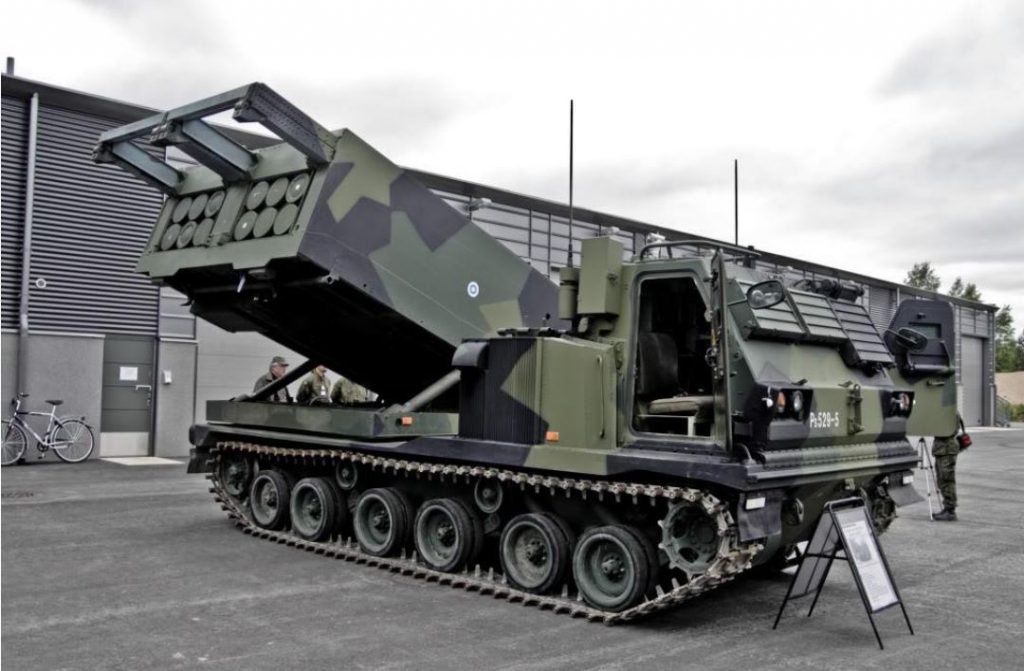 My last bit of research came in the form of Air units. The Finnish Airforce currently operates the F-18C and NH-90, neither of which easily fit my proxy range with the West German equipment on offer. Doing some digging, however, I discovered that during the 70s/80s the Finnish Airforce utilized the Swedish Saab 35, and a bit of digging later I found this image: 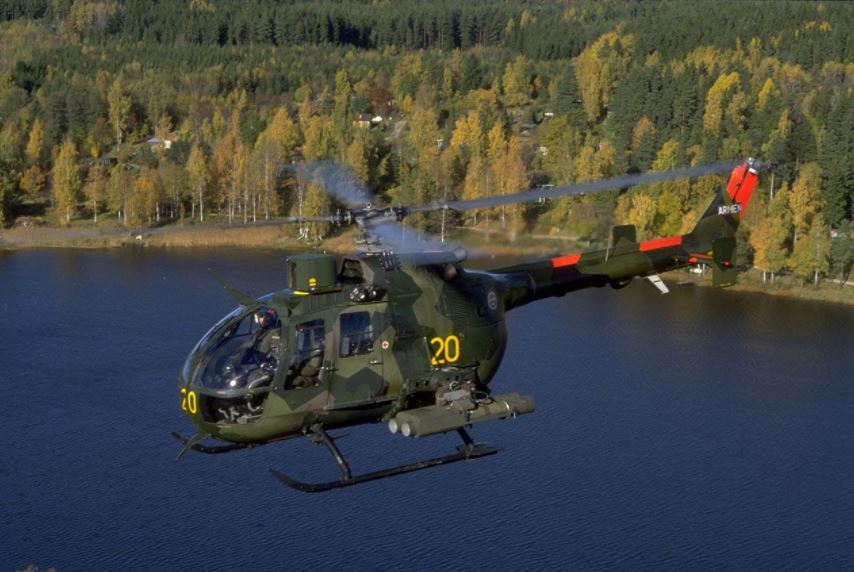 The Swedish Airforce deployed the HKP 9A, a TOW variant of the BO105 PAH. In the fictional scenario that WWIII: Team Yankee offers I’m happy to use Swedish air support to stop a Soviet advance through the Finnish wetlands. They were originally trialed with quad TOW pods similar to the Lynx, which sounds like enough of a hobby project for me to give it a nudge!

After discovering all of this, the last thing to do was to put it all together in a playable list. Armed with the new WWIII: West German book I set about deciding what force to construct.

The Panzerauflakrungs Kompanie is a very popular choice here at the office as a way to get both of the cool new plastics into one army without sinking all the points into the new tanks and also having a solid range of support options. Whilst the Finns did not upgrade to the 2A5 variant, they did purchase 100 Leopard 2A6s in 2014 from the Netherlands. Discovering that the longer L/55 gun is on the sprue made this a viable proxy option so this went straight into the list.

The other new unit is the Marder 2. The Finns recently took delivery of the Swedish-made CV9030FIN, which could very easily stand in for the new Marder. It might not look the same, but until I find a nice kit/file I’m more than happy to paint some Marder 2s up in the Finnish camo scheme!

Another bonus with taking the new Leo 2 Panzeraufklarungs Kompanie is that you can field a Fuchs Panzeraufklarungs Zug from the old book. I love the Fuchs model, and it is very close to the Patria Pasi XA-180 that the Finnish Army still uses so another one to paint up.

I’ll throw in some Tornados to fill out the Air support until a suitable Swedish replacement makes itself clear to me (Saab 37 perhaps?), a BMP-1 to stand in as an M113 OP, and some custom ‘little green men’ infantry sculpts to modernize my infantry’s armor and weapons, and I’ve ended up with this list:

A pretty good attempt at a modern Finnish Defence Force, with some Swedish support to back them up! A lot of points for a relatively small amount of models – sounds like a perfect starter army for me! I’m looking forward to figuring out how I achieve the angular camouflage on the armor without an airbrush and have been testing some ideas already. The army is currently in the assembly stage as I still have a few new models to acquire and build (waiting on some more Marder 2s to arrive at the office), and I have a bit of learning to do with plasticard and milliput to modify some vehicles to achieve the look I’m going for, but I’ll be sure to keep photos coming in as they approach the table ready status.

Is it a competitively viable army? Definitely not. But here at the office, we’re all keen to play larger 150pt games to allow us to take some of the big vehicles, so for the purpose of throwing big tanks at big tanks this army will do nicely. I’m already thinking about dropping a 2A5 to allow me to fit some more PAHs, Tornados, and upgrade some Marder 2s to the 50mm cannon but I’ll get this force done and battle-tested first. I have a lot more thinking ahead of me if I want to bring this down to the 100-120pt tournament level, but that’s a problem for another day.