With all the new cool stuff being released for WW3: West German such as the Leopard 2A5, Marder 2, Wiesels, and new infantry formations, I thought I would look at the new support options available for the West Germans to complement the existing ones.  We have two new artillery options – the 227mm MARS Raketenwerfer and M109A3G (ok not new to the game but are FINALLY available for the West Germans) and something a bit different and unique to this force – the Kanonenjagdpanzer! 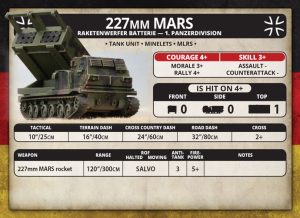 The MLRS is finally able to be used in West German forces.  The card has been available in the box for some time but now you can use it in anger.  You can take this unit as an additional artillery slot – so you could potentially both the LARS and MARS if you want to have double salvo template options (treble if you count the salvo template available to the Tornadoes!).  Each weapon counts as two when firing so if you take three of them, counts as six and means you will reroll misses.  It has a range of 120” AT3 and FP 5+.  A useful AT3 for hitting non tanks but not a great FP.  Very useful though to pin enemy infantry or put enemy AA units out for your attack run with the Tornadoes.  You can take two for 6pts, three for 9pts, four for 12pts.  You can also fire minelets for an additional 1pt for the batterie. 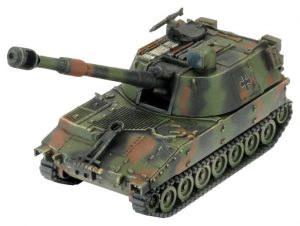 The M109A3G is basically the long-barrelled version of the M109G.  Its not available as a support option per se but available only in the following formations:

The differences that the M109A3G has over the M109G is it has AT15 direct fire, longer range of 112”.  Still has the same AT4 FP2+ with indirect fire and can fire bomblets and a smoke bombardment, auto FP, brutal and smoke in direct fire.  Three for 8pts, four for 11pts, five for 13pts, six for 16pts.

The Kanonenjagdpanzer is a cool looking Tank destroyer but was already obsolete by this stage, so was assigned to the Heimatschutzbrigade (Home Security Units).  For those who play Flames of War and love the tank destroyers – this is for you!  You can take it as an in-formation unit for the Jager Kompanie and is available as well as a support choice.   It has a 90mm gun and has AT16 with 32” range and a handy FP2+.  FA6 SA3 TA1.  Useful cross check of 3+.  Fires HEAT so will struggle against the side armour of top tier tanks but not such a problem against Tier 2 and 3 tanks.  Useful to use to hunt down enemy AA units to clear the path for your Tornadoes or take out enemy IFVs and APCs.  Now they are hit on 3s so you will need to be careful with them. They cost 4pts for three and 6pts for four.  If you are running the Jager formation and do not have enough points to take the Leopard 1s, take the Kanonenjagdpanzer.  In fact, take them because they are cool!

So, consider looking at these new options to go along with the other new options available to the West Germans!