As a miniatures wargame, the gaming table is an essential component of Team Yankee. More than that, the gaming table can have a huge effect on the enjoyment of a game, not only from the look and immersion but also the game design, balance, and level of strategy that needs to be employed. Unfortunately, sometimes the battlefield gets overshadowed by the excitement of list building, painting, and tactical planning, which can result in awkward or non-immersive battles. Let’s look at building better tables for better games.

Build from the ground up

WWIII: Team Yankee is fought in Europe, specifically Central/North-Eastern Germany. The terrain is vastly different from other regions, and the philosophy behind the infrastructure built over the last hundreds of years reflects this.

Google Maps is a great tool that you can use to understand the terrain you’re fighting over. Satellite imagery is brilliant to study linear terrain, roads, railways, streams, and rivers, etc. Street view is also super handy at getting an idea of things like scale and separation, so use this to your advantage. Topographical maps are also available and can help you understand the elevation variance that can’t be seen just using satellite imagery. This is useful if you’re looking at terrain around the Fulda Gap, a key defensive site for NATO troops.

The battle of WWIII: Team Yankee primarily takes place along and around some of the main rivers or canals that run through central Germany, so they’re a good place to start your search. The national Army Handbooks also have brilliant maps in the opening pages, so with a bit of searching, you can very easily find some real-world locations to draw inspiration from.

Be aware that trying to replicate an area 1 for 1 can be extremely difficult due to the scale that we wargame at, so focus on pulling key features from areas and incorporating them into your battlefield design.

So what does all of this look like in a game of Team Yankee? Here are some key points to consider when building a European battlefield: 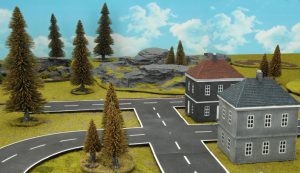 Roads are the easiest place to start, as they can be awkward to fit on a table. Start by placing roads, but think about why the road has been placed the way it is. Are you adding curves to avoid hills and woods, or to make the road run alongside a stream or a line of trees? The German road network is famous for its autobahns, large straight sections of multilane road that would make moving troops around very easy, so ask yourself if your table features a flat area that an autobahn could run through?

Once the roads are down you can start thinking about those other larger features. Take stock of your terrain and start thinking about what story you can tell. Have four woods pieces? Maybe the road curves around some large woods to get to an ideal village or factory location, so group the woods together to provide a large patch of cover. A particularly windy road could be winding around hills or mountains, and an autobahn could cut right through these with some embankments. Flat areas could be covered with large crop or ploughed fields separated by hedges and bocage, tree lines or irrigation streams providing cover or impairing mobility. Buildings are another place to improve your tables, and a great way to add area terrain if done correctly. In Europe especially, where space is at a premium, houses tend to be grouped closely together. Instead of placing a building every hundred or so meters, clump your buildings together to form a small township, village, or especially with Team Yankee a small industrial park or compound. Vehicles require a 2cm gap between buildings to shoot through, so keep that in mind. This will force units in towns to spread out to shoot through the gaps in the buildings, another layer of strategy to consider!

Road placement can also affect how you build up urbanized areas. Industrial parks might require autobahn and rail access, adding some good linear terrain options. Villages and townships can tend towards grid layouts for space efficiency, so use your junctions to create town roads.

Europe is a humid continent, so rivers and streams frequently cut through the landscape. Like other wastelands, they are often overgrown with bushes and tree lines along the banks. When adding these to your table, think about

After all the large area terrain has been placed, linear terrain is the next step. However, linear terrain like walls, hedges, and treelines are often overlooked or completely ignored, and even if added they are often just there for visual interest and not used with the rules. Linear terrain is extremely important in the game, as it can have a huge tactical impact for a very low terrain cost. Use streams, hedges, walls, train tracks, etc. to add texture to the table, force cross-checks, and make you think twice about your approach. They also have a double benefit in adding a lot of visual appeal and immersion, so don’t be shy when using them! Autobahns would often be lined with walls, and likewise industrial areas. Buildings will use fences or walls to mark property bounds, and crop fields can be lined with fences or treelines.

Putting it to practice – Building a European Table

After a fighting withdrawal on the 11th of August from Bremen and reconsolidating their position on the southern bank of the Mittelland Canal, Panzerlehrbrigade 9 was withdrawn to reequip. As the Heer’s demonstration formation they were deemed the best unit to be issued with two pieces of new equipment. These were the Leopard 2 fitted with the improved modular armour upgrade package and a vehicle for their Panzergrenadiers, the newly designed heavy infantry fighting vehicle, the Marder 2. With them came a cadre of replacement troops who had been busy training with these new vehicles, familiarizing themselves with the ins and outs of both the vehicles and their weapon systems.

On the 15th 1 Panzerdivision, with Panzerlehrbrigade 9 in the lead, advanced from positions between Rheine and Osnabruck across the Mittelland Canal, and north towards Oldenburg. This fictional piece from the new WWIII: West German book is a great place to draw inspiration for our European battlefield. A quick look on Google Maps and we can have a look at exactly where these battles took place: 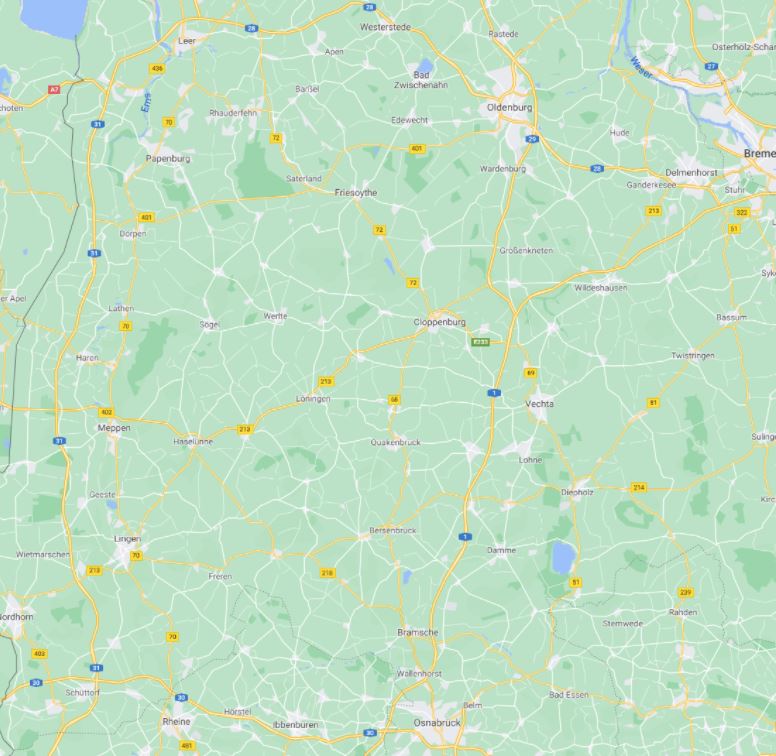 This is a very interesting bit of countryside to be fighting over and provides plenty of exciting opportunities when it comes to designing a table. One thing of note is that using the satellite view we can see the vegetation in the area. 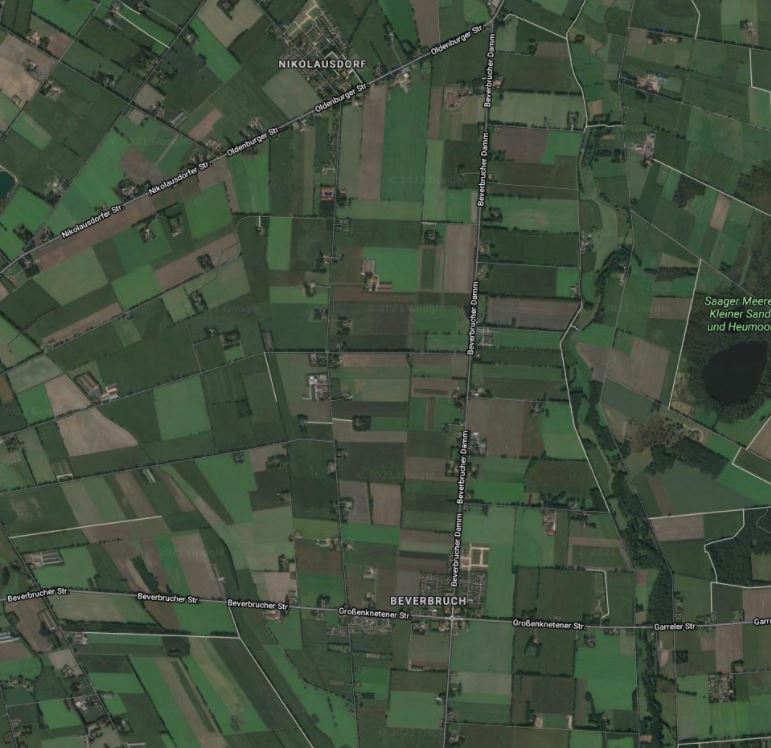 Lots of tree-lined fields and roads and tightly grouped clumps of buildings, with the occasional river wandering through the terrain, and lots of smaller streams and brooks (hint: using the map view draws all waterways in blue, making them very easy to see)

Scrolling between the main towns of our engagement, Osnabruck, and Oldenburg, I’ve picked out a few features that I would like to incorporate into my table design. 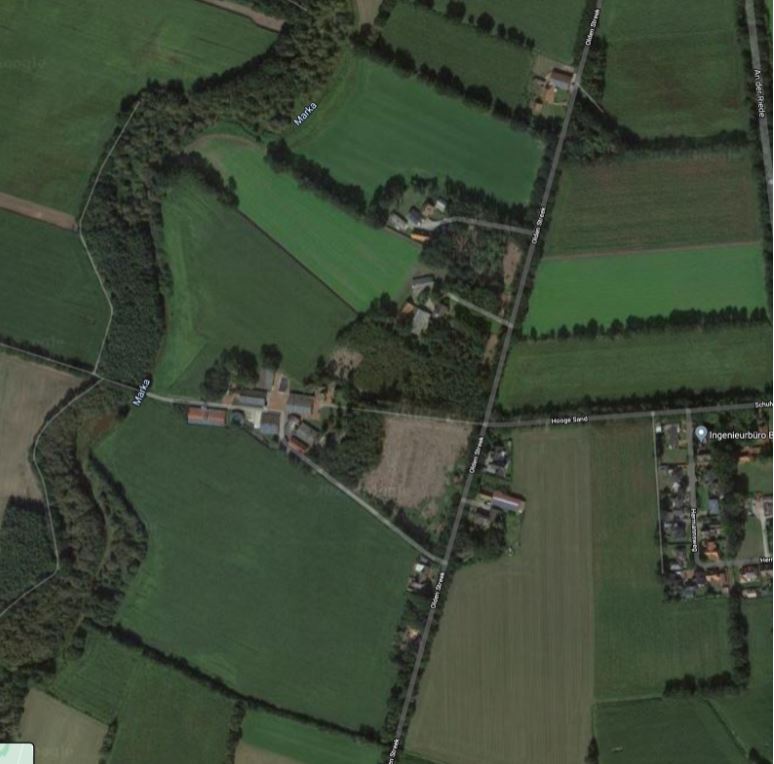 This image shows a small industrial/farming block, with a lot of woods and fields close by. This image also inspires road placement, with bigger, straighter arterial roads leading to the bigger towns, and the smaller roads following terrain and linking the infrastructure together. There is also a stream present in this shot, which is lined with foliage. 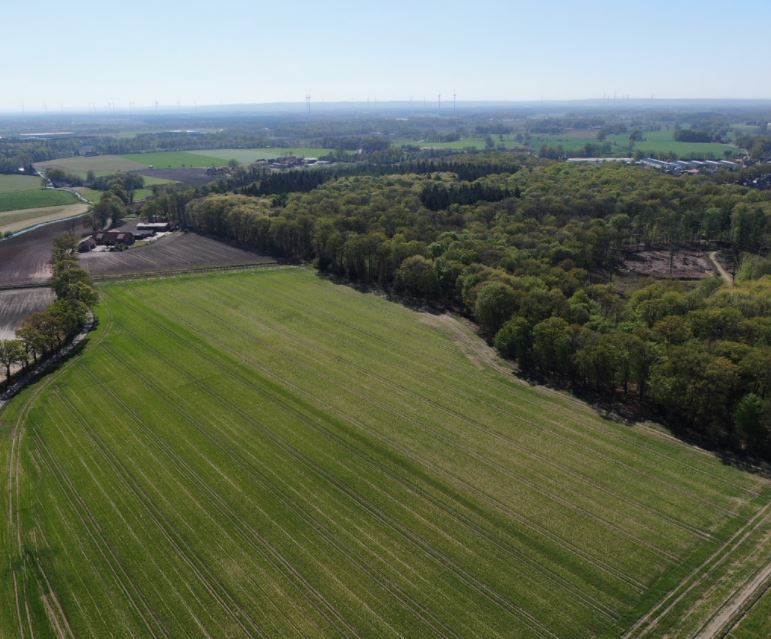 And this is a great drone shot of the landscape, which reinforces how green Germany is. Lots of woods and tree lines that could provide cover and concealment, and big open fields for maneuvering units quickly and efficiently.

With all this in mind, I set about designing and building a table.

And that’s what I’ve come up with! Without focusing on balance I’ve built a table that has a huge amount of visual interest but more importantly allows for far deeper tactical strategy. This table, although it looks like it’s covered in terrain, could realistically be constructed without everything pictured. As an example, a lot of the trees can be removed and the woods base tiles can substitute, the treeline along the river can be represented with far fewer trees, and the walls and hedges can be represented with other pieces of linear terrain to achieve the same effect.

The most important part of this table, and one of the most important parts of any European table, is the linear terrain. Battlefield in a Box sells a very expansive range of options that make obtaining some great looking terrain very easy, however, making your own is also an option if you have the time and resources. Check out the key linear features I’ve used here:

This battlefield will feature live in our first-ever Twitch Plays event! Make sure you tune in live and check it out over at our Twitch Channel to find out how well it plays, with you in the driver’s seat!

Most importantly, keep posting your table designs on the social media pages! Table building is just as collaborative as list building, so post your tables and discuss designs with others to help everyone get the most out of the hobby!