With the release of D-Day: German comes a series of Command Cards used to represent various specific units from the German defence of Normandy. One such Command Card, Air Force Soldiers, gives players the chance to field 16. Luftwaffe Feld-Division. This card could equally be used to represent many of the Luftwaffe Field Divisions of the war, so we dug up an article from the archives outlining the history of the Luftwaffe Field Divisions- perhaps there’s one here for you to represent on the table with D-Day: German… 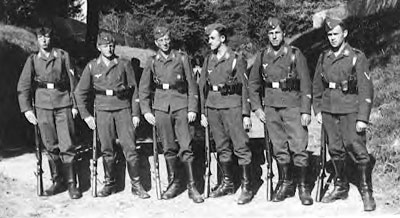 In the desperate winter of 1941, the Heer, the German Army, was on the defensive after its failed advance on Moscow. Every available unit was thrown into the battle, including the Luftwaffe Fallschirmjäger (air force paratroops). One such unit was the Luftlandesturmregiment,  Air-landing Assault Regiment, under Generalmajor Meindl. The regiment’s casualties were so severe that it was withdrawn early in 1942.

However, Generalmajor Meindl and his staff remained behind and formed Division Meindl from spare Luftwaffe ground crew. Under the veteran Fallschirmjäger commander the division fought well in the defence of Cholm.

By the spring of 1942, the Army’s need for troops to replace its casualties was so acute that they convinced Hitler to transfer surplus troops from the Luftwaffe to the Heer. Reichsmarshall Herman Göring, Commander In Chief of the Air Force, was furious. Not only would his personal empire be diminished, but also the reactionary Army, the very organisation responsible for the failures of the previous year, would corrupt his loyal National Socialist airmen.

Instead he offered 22 Luftwaffen Felddivisionen, 22 Air Force Field Divisions, that would remain under air force control, although under army command. The success of Meindl’s division swung the balance, and Göring got his way.

The first ten of these divisions were organized in September of 1942, and, still in their air force-blue uniforms, dispatched to the Eastern Front.

Unfortunately, despite their brand new equipment (the envy of army units still fighting with old, worn out gear from previous battles), they had very little infantry training and little heavy support. Unlike Meindl’s division, their officers were airmen with no knowledge of ground combat at all. As a result, the first Luftwaffe field divisions did not perform well when they entered combat. The remaining divisions formed in early 1943 were little better.

At least one half-formed division was overrun by the spearhead of a Soviet attack while marching to the front, still having conducted no training at all! In November 1943, all remaining Luftwaffe field divisions were converted to regular infantry divisions under full army control. 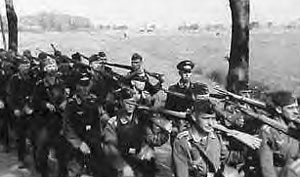 Luftwaffe field divisions were approximately half the size of their Heer counterparts.

The best-equipped divisions had full battalions, but even then, the anti-tank battalion only had 15 anti-tank guns in three companies, one of nine 5cm PaK38, and two each of three 7.5cm PaK40, and no other anti-tank guns in the entire division! There were two positive features though. Firstly, each division had a full Luftwaffe anti-aircraft battalion with four powerful 8.8cm FlaK18 anti-aircraft guns. Secondly, the divisions were entirely equipped with trucks as gun transports and supply vehicles. They had no horses at all.

This was supposed to be an easy sector, and remained quiet until January 1944 when the Red Army launched a massive attack through the division’s sector, wiping the division out in a matter of days.

The division’s artillery was initially only one battalion of 7.5cm GebK15 mountain guns. It was strengthened by two more battalions in 1943, although the battalions may have only had two batteries of four guns each! 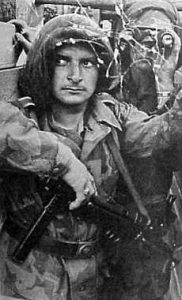 On 25 November the southern part of the division was overrun by a massive Red Army attack, although the northern flank held on until 9 December. The division was rescued by 19. Panzerdivision and Grossdeutschland and reoccupied its positions.

The division was attacked again in October 1943 in its new positions near Nevel, abandoning most of its heavy equipment and retreating rather hastily (as the German Army delighted in pointing out to the Luftwaffe). The division continued to fight on until disbanded in January 1944.

3. Luftwaffe Felddivision (Generalleutnant Robert Pistorius)
Formed at the same time as 1. & 2. Luftwaffen Felddivision, this division occupied positions south of Nevel (north of Vitebsk just west of the Rzhev salient). It had a fairly quiet time until Christmas Eve, 1943 when it was attacked by the 5th Tank Corps. The division was quickly cut off and overrun, being disbanded in January 1944. 5. Luftwaffe Felddivision (Oberst Hans-Bruno Schulz-Heyn)
While the first four divisions fought in the north around Moscow, 5. Luftwaffe Felddivision was sent south to Army Group B in the Caucasus. It was posted to defend Krasnodar, near the Black Sea, with the Rumanian Cavalry Corps. On 11 January 1943 the Red Army launched Operation Mountain to push Army Group B from the Caucasus. The attack split 5. Luftwaffe Felddivision in two. Half remained with the Cavalry Corps, while the other half fought with 4. Gebirgsjägerdivision further north. The fighting continued until May, by which time the division was reunited in the Kuban bridgehead, the only remaining German toehold in the Caucasus. In late May, the division withdrew to Crimea to reorganise before moving to the front lines at Melitopol, just north of the Crimean Peninsula, in September where it absorbed 15. Luftwaffe Felddivision as replacements for previous losses. On 9 October 1943, the Red Army launched another major offensive that cut off the Crimean Peninsula. The division was retreated westward and fought on until disbanded in May 1944.

It remained there until the attacks of January 1944.

It fought off heavy attacks with the help of the Hornisse tank-hunters of 519. Panzerjägerabteilung, winning the Knights Cross for the divisional commander and Obergefreiter Heinz Reichmann. It then absorbed the remnants of 2. Luftwaffe Felddivision to replace its losses. The division was destroyed in the Vitebsk pocket in June 1944. 7. Luftwaffe Felddivision (Generalmajor Wolf Freiherr Von Biedermann)
Was hastily rushed to the front to hold the line on the Chir River after the encirclement of Stalingrad. It was involved in continuous fighting until March, 1943 when it was disbanded and the survivors used to strengthen 15. Luftwaffe Felddivision. Oberleutnant Emil Eitel won the Knights Cross during this period.

The division’s artillery was a single battalion of 7.5cm GebK15 mountain guns. They were supported by a company of five StuG D assault guns.

While moving up to their assigned positions, the anti-tank battalion and leading battalions ran headlong into the Soviet spearhead and were annihilated. The survivors of the division fought on throughout the winter. In April 1943 what was left of the division was used to strengthen 15. Luftwaffe Felddivision. The next series of Luftwaffe divisions had a little longer to organise and actually had two regiments of three infantry battalions. In the case of 9. Luftwaffe Felddivision they were 17. & 18. Luftwaffen Jägerregimenter (light infantry regiments). Although the division had no assault guns, it did have two weak battalions of artillery, and in theory, full battalions of anti-tank, pioneers, and infantry reconnaissance.

It joined the divisions guarding the Soviet troops trapped in the Orienbaum pocket on the coast just west of Leningrad in December 1942. It initially occupied an 11-mile front, but this was later increased to 23 miles. Far too long a stretch for such a weak division. One battalion briefly fought with 227. Infanteriedivision around Lake Ladoga, before returning to guard the pocket in March 1943.

The sector was quiet until 14 January 1944, when a massive Soviet attack by the 2nd Shock Army burst through the division. The attack by five infantry divisions and a tank brigade destroyed the Luftwaffe division in just four days. 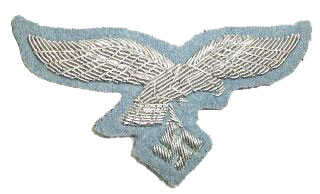 The same attack that destroyed 9. Luftwaffe Felddivision rolled over the division, although Kampfgruppe Helling fought on until the division was officially disbanded in February 1944. The commander of 19. Luftwaffe Jägerregiment, Oberst Matussek, won the German Cross in Gold for his valiant defence.

Unlike the 9. Luftwaffe Felddivision, the division had three battalions of artillery. One with twelve 10.5cm NW40 heavy mortars, and two battalions of twelve 7.5cm GebK15 mountain guns. 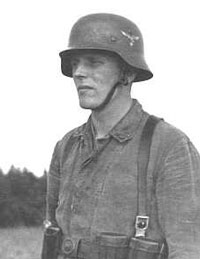 11. Luftwaffe Felddivision
This division was formed in Greece for guard duties and did not see combat until late 1944 as it retreated through the Balkans.

In February 1943 they entered combat near Lake Ladoga north of 1. Luftwaffe Felddivision. They stopped a Soviet attack in their area winning two German Crosses in Gold in the process. They fought hard and well in the January 1944 fighting and in the subsequent retreats. They were finally cut off in the Courland pocket and ended the war fighting in East Prussia.

15. Luftwaffe Felddivision (Generalmajor Eduard Muhr)
This division was scratched together from local air force units around Rostov in November 1942. It absorbed the survivors of 7. & 8. Luftwaffen Felddivisionen in April 1943 and received its artillery regiment from France in May. Its first battles were in July 1943 near Taganarog on the Sea of Azov just west of Rostov. The division was surrounded, but broke out leaving most of its heavy weapons behind. Hauptmann Eitel won a posthumous Knights Cross leading 30. Luftwaffe Jägerregiment through enemy lines.

In October the remnants were at Melitopol on the Dnepr River when they were overrun again. The survivors were absorbed into 5. Luftwaffe Felddivision south of Zaphorye.

16. Luftwaffe Felddivision
Fought in France, 1944 and destroyed at Caen soon after D-Day. 17. Luftwaffe Felddivision
Destroyed defending the Seine crossings in France, 1944, during the breakout from Normandy.

18. Luftwaffe Felddivision
Destroyed in the Mons pocket in France, September 1944.

21. Luftwaffe Felddivision (Generalmajor Richard Schimpf)
21. Luftwaffe Felddivision was formed from Division Meindl, which had five regiments each of four infantry battalions, but little else. Division Meindl was formed as an overall command for the numerous air force security battalions and hastily formed defence battalions that suddenly found themselves in the front lines during the Soviet 1941 winter offensive. When it was formed in February 1942, the regiments were all attached to infantry divisions between Leningrad and Moscow.

Between then and December 1942, when 21. Luftwaffe Felddivision was formed, the division was reunited and held the southern flank of the newly opened corridor to Demyansk and Cholm. The newly formed division only had four regiments, the fifth having been disbanded. It gained an artillery regiment with French guns in the summer of 1943, along with an assault gun battery of four long-barrelled StuG III assault guns (increased by a further six StuG IV in 1944) and ten 7.5cm PaK40 guns. Each regiment was also reported as having as many as ten 7.62cm PaK36(r) anti-tank guns. At this point it was easily the strongest Luftwaffe field division in existence. The division was involved in heavy fighting from March 1944 until it surrendered in the Courland pocket at the end of the war.