My first Flames Of War army was German, my Fortress Europe army was German, and when Hobby League started up and everybody had gravitated to the other three forces it seemed like I was destined for Germans again. Luckily for me, with D-Day: German on the horizon I was able to take a deep dive into all the exciting German forces and pick a unique and colourful force to work on.

The key to embarking on any project, Flames Of War or otherwise, is to latch onto something you find interesting. For me, that meant the opportunity to either modify units in my force or paint a colour I haven’t painted before- because after two lots of grenadiers in Field Grey, I was frankly not that interested in doing it a third time around. 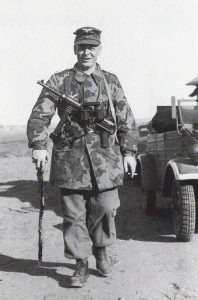 A tabletop approximation of 16. Feld-Division (L) in Normandy, 1944, offers me both of these chances— an opportunity to paint Luftwaffe blue, and an opportunity to modify a few grenadier uniforms to reflect the very swish LwFD camouflage smock.

Having spent an afternoon spitballing with Phil and Andrew, I came up with a list representing 16. Feld-Division (L) roughly as they were during Operation Goodwood, supported by bits of 21. Panzerdivision.

I’m working out of the very exciting D-Day: German, which isn’t out yet—but then again, what’s the point of hanging out at the Battlefront Studio if I can’t get a little early access. With this in mind, here are my first 50 points: 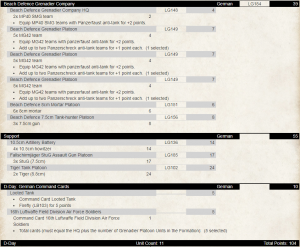 As I’m sure you can see, my first 50 points give me a playable formation, but it is also all infantry, which is something of a mountain to climb in only a month—especially since I’m also hoping to pull off some figure modifications to make the miniatures

A Brief History of Luftwaffe Field Divisions
The Luftwaffe Field Divisions were raised from the ranks of regular old Luftwaffe ground crew. They weren’t the most exceptional troops on account of having never signed up for infantryman duties, and their inception as dedicated field divisions was more a response to suggestions that the German Army could do with a few hundred thousand more warm bodies than it was the establishment of a military unit full of guys who found their natural calling as foot-sloggers after making a brief detour into air force work (kind of like switching your major at university mid-degree because you found out anthropology was really more your thing than law). In any case, the LwFDs kept their organisation and remained under the leadership of Luftwaffe officers until late in 1943 when they were reorganised and transferred to the Heer. 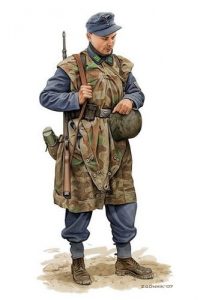 Project Research
Up until their transfer, Luftwaffe Feld-Division boys were outfitted with the traditional feldblau Luftwaffe Uniform, making them a distinctive blue on the battlefield, quite obviously different to the feldgrau of the Heer. After being subsumed into the army structure, the LwFD boys were outfitted with regular feldgrau Heer uniforms as their original blues ran out. This will give me the opportunity to paint a mixture of Luftwaffe and Heer uniforms and equipment for my force, as by 1944, there would have been a good mix of kit and uniform. A great source for uniforms is this here 18th Luftwaffe Field Division https://18thluftwaffefielddivision.weebly.com/our-kit.html> reenactment group (who don’t appear to have any info on their ‘About Us’ page, so I can’t thank them), and there is a full list of kit I could apply to my LwFD (you can follow the link and see the list yourself) and there is also this handy tidbit on the subject of mixed Heer/Luftwaffe uniforms:

“Very frequently we can see, especially as the war progressed into 1944-45, the use of Heer uniforms and insignia within the ranks of the LwFD. Not only was supply of uniforms and equipment transitioned to Heer supply, but also the replacements of men. It is for these reasons that we find such variance in equipment and uniforms through to the end of the war.”

Smock and Roll
One of the key features of the Luftwaffe field boys was their iconically formless and ubiquitous camouflage smock. The picture at the top of the article shows a man of the Luftwaffe Field Divisions in one of these splinter-camo smocks. The plastic grenadier kit doesn’t happen to be wearing these smocks. If I were playing my LwFD as kitted fully in Heer or fully in Luftwaffe standard service uniforms this would be no problem, I would just paint then feldgrau of feldblau or a mixture of the two and be on my merry way. But no, I’m going to model a selection of my figures in this iconic smock—and that means Green Stuff.

The simple recipe is to trim off the bottom of the uniform jacket, slice off any pockets, and then with a rubber clay brush (as tiny as you can get it) start spreading the green stuff around the waist of the figure and down to just above his knees. The Luftwaffe camo smock did not have any breast pocket, so you could either shave those off the figures or very thinly green stuff around them to hide them, but in most cases there is enough webbing and extra bits of equipment already covering them. The smock did have a pocket on either thigh which you could model with two tiny squares of green stuff.

After priming, I painted the smock according to the instructions in Colours Of War, a mixture of German Camo Beige and Green Ochre, then highlighted with German Camo Beige. To separate my Luftwaffe camo pattern from the Heer I picked a slightly different colour combination, using Vallejo Panzer Aces Splinter Blotches I & II, which give a brighter colour palette and are a good colour choice for FJs too. 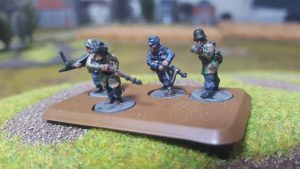 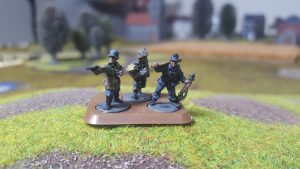 The guys in blue also benefited from Colours of War, as I followed the Luftwaffe Jaeger instruction in the book to get that bright blue I was so looking forward to painting. 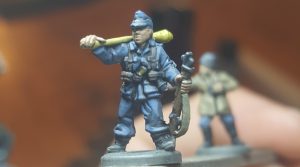 The Rest of the Stuff in the List
My 50 points of modified Luftwaffe infantry is certainly a bit ambitious, but it’s comforting to know that the following months will see me painting only a handful of tanks, so it’s not the end of the world. 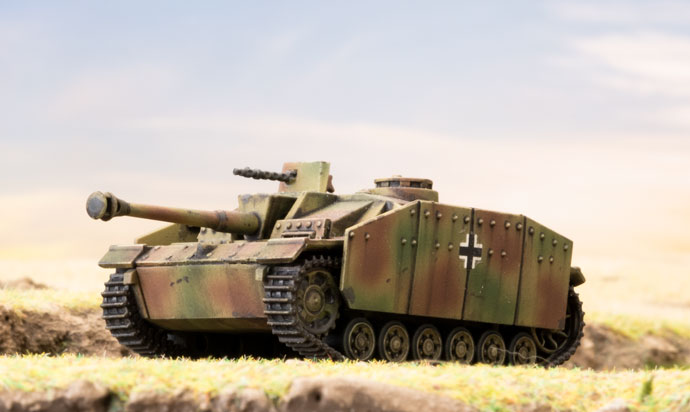 The 10.5cm guns in the support are being modelled as captured Russian guns from the Eastern Front just to add another point of visual interest to the list- they are close enough in use and effectiveness that it’s not beyond the pale to use the 10.5cm Unit Card for those models.

The elements of 21. Panzer that backed up the Luftwaffe in Caen will be represented by a pair of Tiger tanks, a handful of three or four StuGs, and a captured Sherman Firefly. Instead of keeping the list strictly to 100 points, I’m actually painting up a few more points worth of things so I have the option to switch and swap the odd unit or two to give the force a lot more modularity. 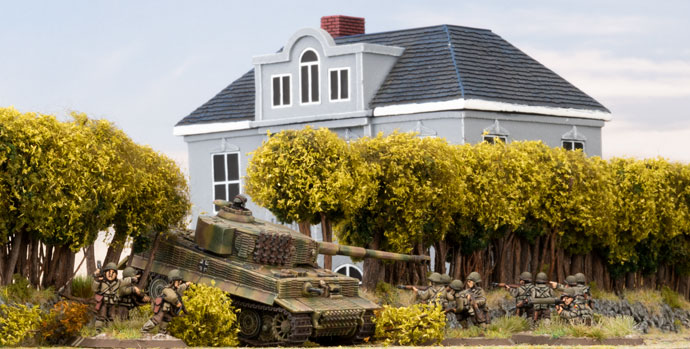