On the frosty morning of December 16, 1944, the Axis powers launched a surprise attack intended to rout the Allies and allow German forces to encircle their enemy. The Battle of the bulge marked the end of Germany’s ability to launch offensive campaigns and for Flames Of War this campaign marks the largest jump in American armour since the US entered the war. 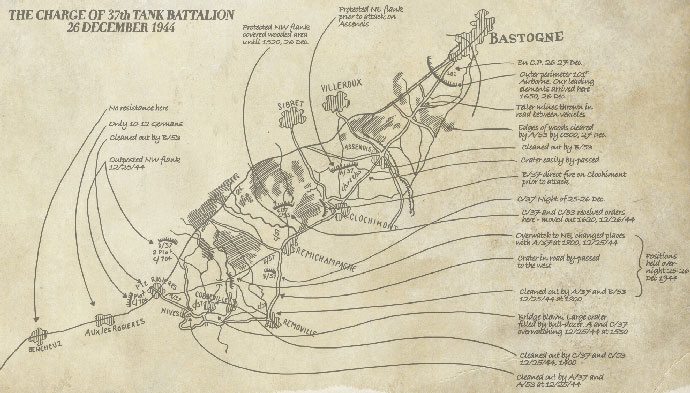 The following article is not a history lesson but a preliminary analysis of the M4 Sherman Platoons available in Battlefronts highly anticipated Bulge America.  This book is the third American instalment of V4 late war and brings a HUGE breath of life to the American armour scene.  Pershings, Super Pershings, M36 Tank Destroyers, and M24 Chaffees are all making their V4 debut.  Again Shermans, we’re covering Shermans here.  Don’t be disappointed, there is a lot to be happy about!

Bulge America brings US players a much-needed boost in firepower.   American lists have faced a huge bottle neck thus far.   Only the single black box unit of Sherman 76mms and the M10 formation have a gun capable of defeating the bevy of front armour 9-11 that has entered the game.  American armour has felt lack lustre with no main battle tank boasting high front armour or a larger gun.   Aside from the front armour creep, US players are also seeing themselves swarmed by up gunned T-34 85s and outperformed by the British 17pndr’s AT14.

“Americans have an entire M-10 formation with a sweet 36” AT 12 gun, what’s there to complain about?” you may say.  Well M-10’s are a nice and scary unit, especially in ambush, but aside from losing stabilizers they’re a perfect candidate to fold to assault.

Enough about that.   Battlefront’s Bulge America is exciting and brings entire Companies of Shermans up gunned with the capable 76mm cannon all with the stabilizer special rule.

A late M4 Sherman 76mm company (non-veteran) is starting at about 5 points a piece with a unit of three for 15 points and goes up to 25 points for the five.   You do of course have the option to drop any or all of the 76mm guns for one point each, but I think there is impressive value here.   For a point of comparison, a non-hero unit of T-34 85s (soviet Bagration) starts with five tanks at 22 points a green skill rating, 6 front armour and their only special rule being “Not One Step Back” (last stand on 3+).    Despite the T-34 85 being approx. half a point less per tank, its still suffers from 8” shorter range and equally poor front armour.

Don’t like getting hit on 3’s?  Would you rather play less aggressively and trade shots from afar?   Bulge America also offers a Veteran M4 Sherman (late) company.  For an extra point a tank your platoon can go from getting hit on 3’s trained and confident (same 3+ remount) to careful hit on 4+, trained, and special rule Yankee ingenuity (3+ tactics).    What this leads to is an elite unit with 3-5 tanks averaging 5-7 points per tank (jumbo and easy 8’s is an option, more on that later).  When you compare this to other careful units (panzers, su-85s, Cromwell’s) I think these sit well, despite being at the high end of the point spectrum.

The Shermans claim to fame has always been its ability to move and maintain its rate of fire.   Against aggressive foes hit on three the Sherman can move at tactical speed fire both its shots and only be facing a base modifier 4+ to hit.   The T-34 85 unit of 5 mentioned above can be absolutely decimated in a single round of shooting.   As a primarily soviet player who favours medium tanks over the IL-2, KVs, and even Churchills, I have felt the sting of a 5-tank unit of 76mm Shermans running rampant on the wrong side of my armour line.   Stopping this unit when I see it, has been instrumental in assuring victory over American armour lists.   Not because a 75mm Sherman isn’t dangerous to a T34 but because players are typically desperate to shoehorn all the AT 12, they can into a list.   A 5-tank company can stick out like a sore thumb and sending shots into this unit can take a lot of points off the board in a hurry.

Now I Know what you’re thinking, a decent round of shooting can wipe any unit off the board, especially medium tanks like the T34 and the Sherman, but the distinction being that for every T34 you shoot there is another one like it.  If you’re going to run aggressive units with low armour you need to be able to push up the board without the fear of loosing a linchpin unit.

The ability to spread out larger AT 12 guns across a force, as well as the ability to take a min of 3 units but not be forced to take five is a big deal.   Flames of War is a game about board control, and the more angles you can threaten the better.   Having the option to tailor a single unit’s size and point value is an even bigger advantage when building a list.

The new M4 Sherman (Late) Company allows American players a tremendous amount of flexibility.  So far, we have only covered the upgraded 76mm gun that is now available to all Shermans in the book, but the fun doesn’t stop there. Bulge America brings back the Jumbo and the Easy 8.

For two points you can add a Jumbo to any platoon, for three points that Jumbo gets the 76mm gun.  Veterans to previous versions of flames of war will remember “Jumbos lead the way”.   While that rule no longer exists because hit allocation has changed, a mere 3+ will allow a mistaken target to divert an attack to front armour 11.  While this rule is no longer as on the head as the pervious editions, the effect remains the same.   Low volume of fire enemies such as Soviet and German heavies will have to pay a heavy tax to put fire into these units. Veteran platoons boasting the careful rating will have even more protection. 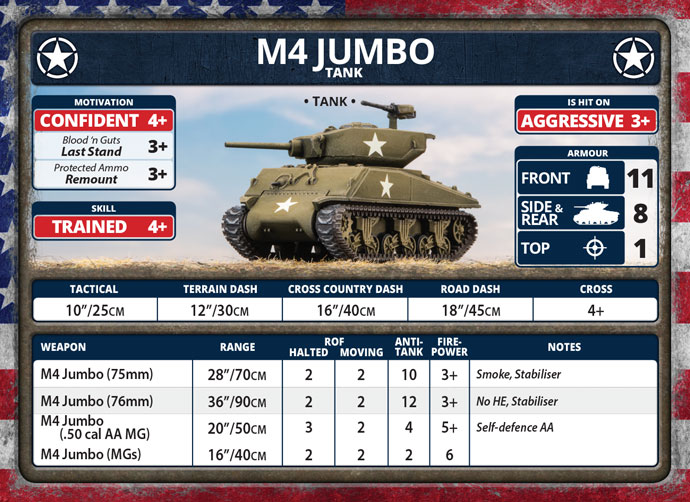 Jumbos feel like an easy add, points allowing.   Easy 8’s intrigue me, but at 2 points a tank tend to feel like a points trap.   Don’t get me wrong, the advantage is obvious.  Being able to move up to 4” and still be able to have your full rate of fire with no penalty is nice.  If you can pass a skill-check you can blitz.   Moving 8” and shooting at halted rate of fire with no penalty is fantastic, but you have to not fail a skill-check.   In the end this feature feels highly situational outside of obvious hide-shoot next round situations.  Normal trained units only have a 4+ to pass skill checks, Veterans get a 3+ via Yankee Ingenuity.  I would lean towards taking Veteran companies to utilize the 3+ skill check, but these tanks are coming in at 7-8 points a pop.   I’m not saying these are a bad option, I’m just saying that with my play style the usage is not jumping off the page immediately.

On the other hand, a unit of non-veteran M4’s full of easy 8’s with the normal 75mm gun might be the play here.  I could easily see them sneak their way around a flank drawing minimal attention, taking opportunistic shots as they go, after all AT 10 is far from useless.

Overall, this book is exciting for American players and those on the fence about starting an American list in late war.  We just scratched the surface, only covering the Sherman component to what is a really great book with a lot of options.   The addition of a more readily available 76mm gun is a big game changer.  The addition of Pershings, Super Pershings, and M36 Tank Destroyers will take a lot of heat off everyone’s favourite medium tank, or at least everyone who bought three American half’s of hit the beach.