For those who have read any of my previous articles, you will know that I have an affinity for reconnaissance formations and with the release of Bulge American, players now have a choice of three recon formations instead of just the one that released with the D-Day American command cards.    They are the Cavalry Recon Troop, M5 Stuart Cavalry Tank Company, and the M24 Chaffee Cavalry Tank Company.

Starting with the Cavalry Recon Troop, this formation comprises the following units:

This is the same as the D-Day formation except you can now take an optional M24 Chaffee Tank Platoon instead of an M5 Stuart Tank Platoon.  The core unit here is still the M8 Greyhound Recon Patrol made up of either one or two M8 Greyhound (37mm) armoured cars and two jeeps (one equipped with a mortar and one with an MG).  For me, I will almost always take two armoured cars to have four vehicles for stayability.  These units have the observer, scout, and spearhead attributes.  Being Confident Careful Veteran, they can move under cover without firing being hit on 6s.  They can also get your force into strike position or observe for your artillery.  Having a mortar jeep in each patrol gives you a template (granted rerolling hits) that can be useful for pinning enemy units.  Imagine taking nine patrols plus the M8 Scotts for TEN templates!   Taking this formation gives you a minimum of four units and maximum of twelve units for the formation break.  This unit can hang around for a while, especially if you try to max it out.  For me, I would probably take at least four patrols and no more than six with either the M5 Stuarts or M24 Chaffee’s and the M8 Scotts.  Two other reasons I like this formation is that I can have a lot of units for smaller point games, or for larger games, be able to use points elsewhere to either pair with another formation or have some bigger point units on the table.  Pershing’s anyone? Seven platoons for the formation break.  Lots of AT7 supported by fast AT10s in the form of Chaffee’s with the Pershing’s providing AT14 support.  Para Infantry to hold ground or assault.  Five units to spearhead and SIX artillery templates to boot!  This list suits my playstyle, it has a bit of everything and can create some headaches for your opponent.  It does require a bit of finesse using it though but will be fun to play. Still keeping the core formation (only dropped one M8 Scot), we still have infantry in the form of Armoured Rifles giving you a big infantry platoon with lots of bazookas and MGs (another template!) supported by AT13 (with command card upgrade) fast moving M18 Hellcats.

For the small point game of 50pts (I have seen and played in these), this is where this type of formation really shines: Had to remove the Chaffee’s, one Recon Patrol, HVAP for Hellcats, and change out the Armoured Rifles for a Rifle Platoon.  Still five units for the formation break plus four artillery templates, infantry and AT12, which at 50pt games is damn good.

Next up is the M5 Stuart Cavalry Tank Company, this formation comprises the following units:

The core of this formation are the Stuart tanks and so this would suit a player who likes to build their list around light tanks with recon as part of the formation.  I would max out this formation if I can, depending on points.  Let’s look at 105pt and 80pt options. 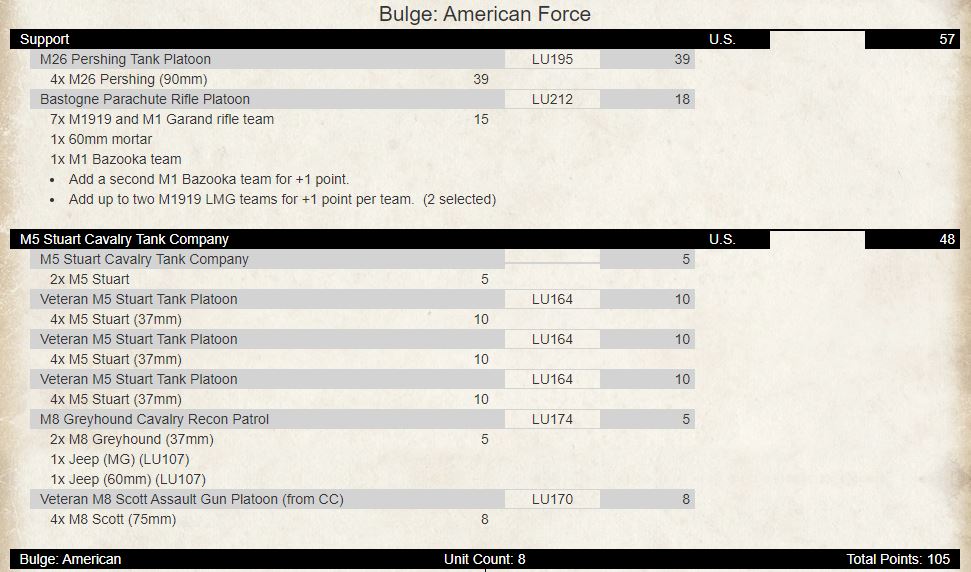 Six platoons for the formation break.  You have two artillery templates. Pershing’s to provide the heavy firepower and para infantry to hold or assault.  Lots of fast AT 7 stabiliser goodness with fourteen Stuarts zipping around spearheaded by the Cavalry Recon Patrol.

Looking at the 80pt option we change it up a bit: Keeping the core formation (had to drop one M8 Greyhound), we changed out the Paras and Pershing’s for Armoured Rifles and Hellcats.  Still has similar hitting power for less points but the Hellcats move at similar speed to Stuarts allowing them to keep up.

Finally, we have the M24 Chaffee Cavalry Tank Company, and this formation comprises the following units:

The core of this formation are the Chaffee tanks and so again this would suit a player who likes to build their list around light tanks with recon as part of the formation.  You also now have the option to take M5 Stuart Cavalry Patrol which is made up of one M5 Stuart (37mm) and the two jeeps.  I would max out this formation if I can, depending on points.  Let’s look at 105pt and 80pt options. We have maxed out the formation with seven units for the formation break.  The Chaffee’s bring fast moving AT10 stabilised goodness supported by Pershing’s, rifle platoon plus two units for spearhead and three artillery templates.

Looking at an 80pt option now and this is what we could have: Removed one Chaffee Platoon but bolstered the other two from four tanks to five.  Replace the Stuart Recon Patrol with Greyhound and removed one Scott.  Replaced the Pershing’s with Hellcats.  You still have five units for the formation break and twelve Chaffee’s along with the Hellcats upgraded AT13 to provide overwatch.

The addition of the new recon formations and having the ability to take Chaffee’s is exciting and I am looking forward to adding Chaffee’s to my Cavalry Recon Troop.  I hope this has given you some food for thought around what these formations could do to provide some different interesting options to field on the table.  Happy list building!