History of the M36

Introduced to counter the heavy armour of German tanks like the Tiger and Panther, the American M36 tank destroyer hit the field in 1944. Boasting a powerful 90mm cannon, the M36 was more than capable of ruining the day of any German tanker unlucky enough to enter its field of fire. 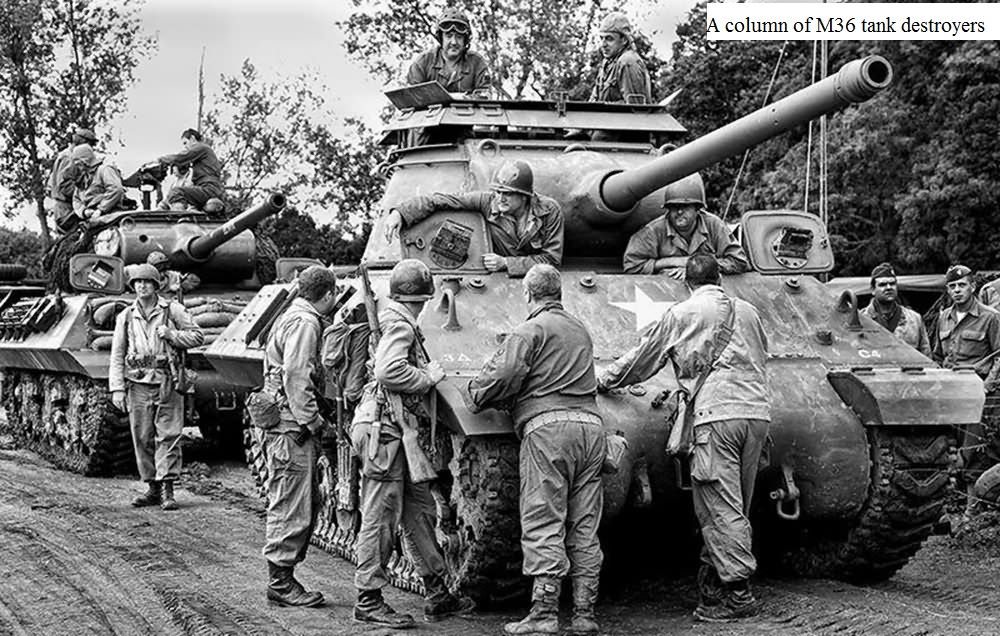 Just like the American M10 Tank Destroyer, the M36 was built using the same chassis and drivetrain as the M4 Sherman, but with a new, larger turret capable of supporting its gun as well as the more powerful Ford GAA V-8 engine. The amount of front armour was reduced on the vehicle to reduce weight. In addition, the turret was left open-topped to allow for better peripheral observation; though after the war some were equipped with folding roofs to protect the crew from falling debris and shell fragments. The reduced weight allowed the tank destroyer to quickly move through the battlefield to ambush enemy tanks wherever they appeared. 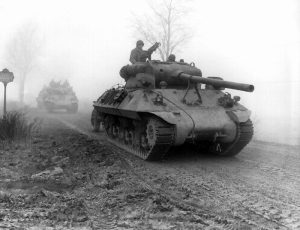 Officially labelled as the “90mm Gun Motor Carriage, M36” it would unofficially be called the “Jackson” or “Slugger” after the second world war. More than 2300 of these vehicles would be produced in the US, with more than 1400 built during WWII. By the end of the war the M36  had mostly replaced the M10 as the primary tank destroyer of the US. They would see post war service by Americans in the Korean War, and by other nations such as Iran, Bosnia, Croatia, Pakistan, and others throughout the 20th century.

The M36 Tank Destroyer in Flames of War 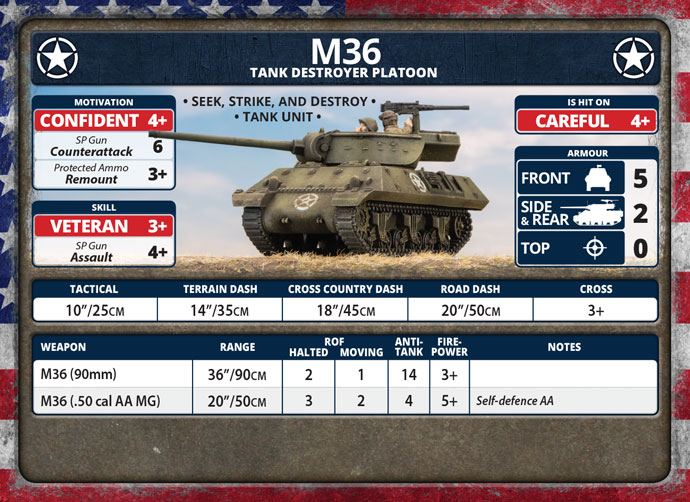 The M36 is a powerful defensive tool. With an Anti-Tank rating of 14 on its main gun and a 36” range, enemy tanks will want to steer clear of these vehicles when possible. With a front armour of 5, the armour of the M36 isn’t reliable enough to protect it during a brawl. Consider leaving your units in concealed terrain to avoid enemy fire rather than relying on their armour.

When the opportunity presents itself, you may want to place your M36 Tank Destroyers in Ambush as it allows them to retain their Halted ROF for a devastating blow to an unsuspecting enemy armorer unit. Don’t forget to take advantage of their Veteran 3+ Skill rating to Blitz into line of sight of the enemy while maintaining your Halted ROF, or Shoot and Scoot to retreat to the safety of cover after firing.

On the offense, the M36 can make use of its 36″ range to snipe enemy units without worrying about return fire. As an added bonus the tank destroyer does not have the No HE rule like its cousin, the M10, and suffers no extra penalties when firing its cannon at infantry and gun teams.

The M36 Tank Destroyer is a high risk, high reward unit. Its potential for destruction is only matched by its own relative fragility. At a pricey 6 points per vehicle you’ll want to do everything you can to keep your glass cannon out of harm’s way while it brings the pain to your opponent. If you’re able to distract your foe with other, cheaper units like Shermans, Chafees, or Stuarts you can potentially win a game off the back of the kill tally your M36 units collect.