With the launch of the Bagration: German release, I thought I would look at how a new player, or someone on a budget, get a force on the table that would be semi-competitive or at least hold its own with such iconic equipment as the Hetzer assault guns and Panzer IV/70s.  For the new player, it opens the door to playing Flames of War without needing to buy, assemble or paint too much and get into playing the game quicker.

So, if we look at what we get in the excellent value starter set (Tank-Hunter Kampfgruppe), that will help decide what formation to run.  The starter set contains the following: The bonus here is that the rulebook is included in the box – so the new player makes a saving right away.  Now if we look at what formations are in the Bagration: German book, we can see what we can maximize from what we get in the starter box.  The most obvious formation is the Panzer IV/70 Tank Company.  There are now three German Late War Starter boxes in total so we will explore what options we can have with multiple starter boxes.  We will look at two points options – the 2021 points for LW (105pts) and the standard 100 pts.  Might not be much in it, but it can decide how to structure your force.

Starting with just the single starter box by itself, we will look at the Panzer IV/70 formation first followed by the Hetzer formation.  Let us look at what units comprise this formation:

Looking at the formation and what we get in the starter box, we can maximise the Panzer IV/70s, Panzer grenadiers with their half-tracks and the AA tanks.  The Hetzers could be used as formation support with the 10.5cm Howitzers and 8.8cm AA guns in support. This formation is a bit fragile but if handled well, should perform OK.  It only has four units for the formation break and four small platoons of 2 teams.  This is primarily a defensive force but can have a bit of fun with two platoons of Pumas causing havoc and you can put the four Panzer iv/70s in ambush.  Now for 5pts less, you could remove one of the Puma Scout Troops, downgrade the two Ostwinds to Wirbelwinds and pick up a Lucky Command Card.

To buy this army you need only to purchase the following for $170:

The second formation we can look at is the Hetzer formation.  Let us look at what units comprise the formation:

As we only get three Hetzers in the starter box we need to add a couple of boxes of Hetzers to make this formation complete, but we can use the rest of the starter box to flesh out a decent list. 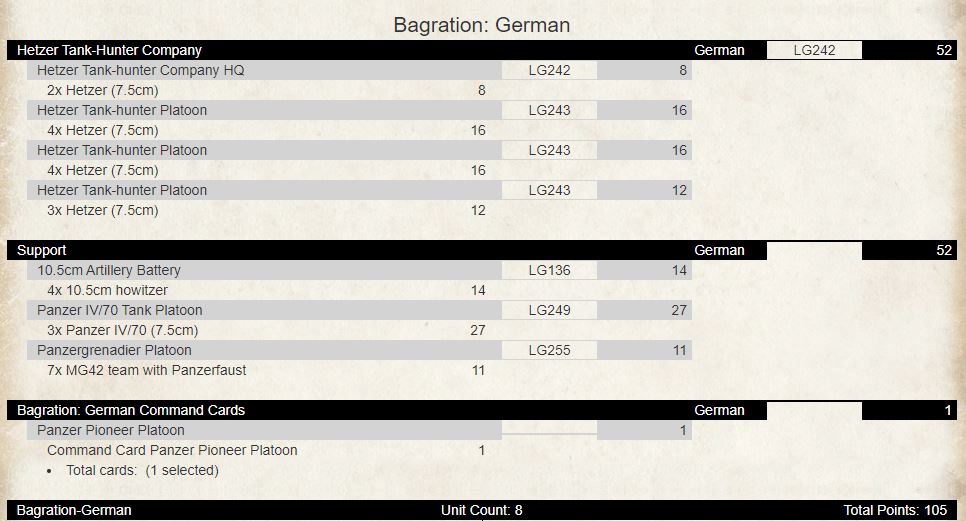 To buy this army you need only to purchase the following for $230:

I think the best value for this starter box is when combined with one of the other two German starter boxes.  If we combined it with the German Panzer Kampgruppe Army Deal, we get the additional models:

Now to my eyes, this gives a great start to run different formations by adding further boxes as required, but the best formation to start out with, combining both starter boxes is to run an Armoured Panzergrenadier Company.  This formation comprises the following units:

That is right – we can have our Panzer IV/70s integral to the formation!  To maximise the two starter boxes for this formation we need to buy an Armoured HQ box and a box of Gun/Mortar half-tracks as well.  So how does this look for 105pts? Pretty solid formation and has two artillery templates – one of which is integral to the formation.  If you prefer the 7.5cm Gun Half-Tracks you can swap them in for the 8cm Mortar Half Tracks for the same points cost.  You can swap out the Panzer IV/70s for the Tigers or Panzer IVs or Stugs – or add what you prefer as formation support.  To get to 100pts, swap out the 1.5cm Artillery Battery for 15cm Nebelwerfers for 5pts difference exactly.

To buy this army you need to purchase the following for $295:

There you have it – some options to ponder for getting started with different formations with the starter box(es).  Enjoy!