As world War II dragged on, the Axis found themselves in a dire situation.  As momentum on the Eastern Front ceased at Stalingrad and Kursk, it became apparent that they lacked the production capacity to hold the Red Army back (and eventually rebuff the Allied landings in Normandy in 1944). Worse still, military innovation was progressing at a massive pace, but the realities of shortages of raw materials and manpower meant that to keep up with the Allies, Germany had to do more with less.  And for a time, they achieved this, though in limited terms.  Advances in cheap portable shaped charge weapons enabled infantry to destroy heavy tanks and dedication to quality over quantity led to some truly impressive (If somewhat impractical) late war behemoths like the Tiger II.   But numbers have a role to play in warfare and the Axis knew they also needed a new tank destroyer in large numbers.  This weapon needed to be both easy to produce with minimal resources and armed with a weapon fearsome enough to deal with anything the Allies could field.  This tough task was achieved by putting a large, but commonly available, gun on the small frame of the numerous, yet obsolete, (modified) Panzer 38T.  The resulting vehicle became known as the Hetzer. 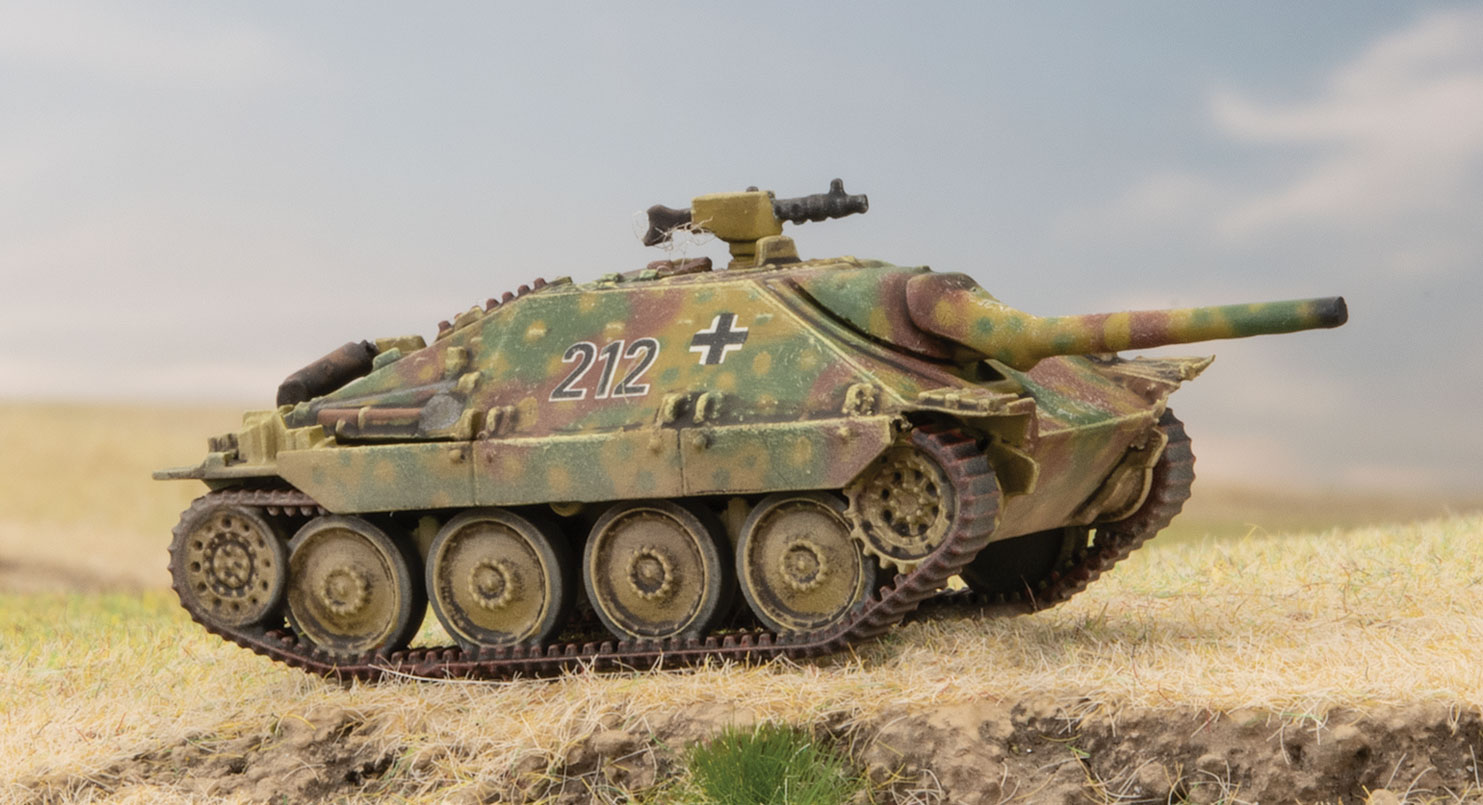 The Hetzer in Flames of War

For the German Flames of War player, the Hetzer, which is featured in the new army book Bagration: German represents an opportunity to bring a decent gun to the fight without breaking the bank on points.  Traditionally the Axis player has paid a premium for their tank destroyers, owed to the general German trend for having high-quality weapons, good armour, and excellent Skill and To Hit On ratings.  The Hetzer reverses this course by balancing armour and firepower with economy.  Despite this, the Hetzer has stats that appear on par with the StuG III, a much loved and flexible option for German players.  These two vehicles have the same Skill and Hit On ratings.  Also, the StuG and Hetzer are at parity with their close combat stats with a counter attack and assault of 5+ (which is fitting for a vehicle designed to stand off from the enemy).  The armour is the same.  They both feature Front Armour 7, which is excellent, and mediocre Side 3, Top 1 values.  Lastly the gun is the same, a forward firing 7.5cm with AT11, 2 shots when stationery, 1 on the move and 3+ Firepower (a canon that even in late war most Allied tankers wish they had). But this brings us to the one really important difference that makes the Hetzer worth 4 points compared to the StuG’s 5.6 points; The Hetzer is overworked.  If you are unfamiliar with this rule it means the Hetzer has an extra +1 to hit when it moves.

Tactics For The Hetzer

The Ambush:
Considering the overworked rule provides a 1.6-point discount for the Hetzer, (over the Stug) you come away with a pretty good trade-off in my opinion. However, this does require the German Player to rethink his play style.   With Front Armour 7 the Hetzer can take the odd hit, but if it is going to go toe to toe with the enemy’s heavy hitters and earn its points, it is going to need to use some tricks.  First and foremost, the Hetzer was designed to ambush its opponents, so in Flames of War, when you are playing a scenario where you can use Ambush rules, the Hetzer is your best option.  Once you spring your ambush each Hetzer in the platoon will have its 2 shots without the penalty from being Overworked (because they count as stationary when they spring the ambush).  If you have to place the ambush in a vulnerable spot you do not have to worry too much. At 4 points each, you can likely get a pretty good trade-off in point returns from destroyed enemy teams before your Hetzers are taken out by return fire.

Storm Troopers:
If you are an experienced German Flames of War player the Blitz/Shoot and Scoot combo is likely not new to you, and the Hetzer is practically made for this.  With this tactic, you use the Stormtroopers rule to Blitz your Hetzers from behind terrain that blocks line of sight (like a building or hill) so they count as stationery in the shooting phase thereby avoiding the overworked penalty. Then after they fire 2 shots each, you Shoot and Scoot them back into cover so in the following turn the enemy cannot shoot back.  Most German players will have used this tactic with other vehicles at some point.  The German’s excellent 3+ Skill makes this combo possible…usually.  As you have to be successful on both Skill roles to pull this off, most Axis players can probably think of a time when their precious and expensive panzers failed their subsequent roll leaving the entire unit exposed to a platoon of M10 Achilles or other scary anti-tank units.  (Then this platoon subsequently annihilates your exposed tanks in the next round.) The Hetzer however is the answer to this problem.  The Hetzer has the 3+ Skill to pull off the Blitz/Shoot and Scoot combo, but if it fails the Shoot and Scoot roll it’s no big deal. If they end your turn in plain sight of the enemy’s return fire, you don’t risk losing much.  3 Hetzers is 12 points, where a single Tiger is 12 points.  This means you should be able to absorb the return fire, and if you lose the whole platoon, it is not likely to be as disruptive to your battle plans as seeing your Panthers or Tigers burst into flames.

Hetzer Horde
Where the above tactics are variations on exiting techniques in Flames of War, this one is new. Rather than using Hetzers as support to help your army, you can use the Hetzers as the army!  Just go ahead and max out every option to take this little tank hunter in your force. 14 Hetzers will run you only 56 points.  Here is an example of a Hetzer based force I have been thinking about: 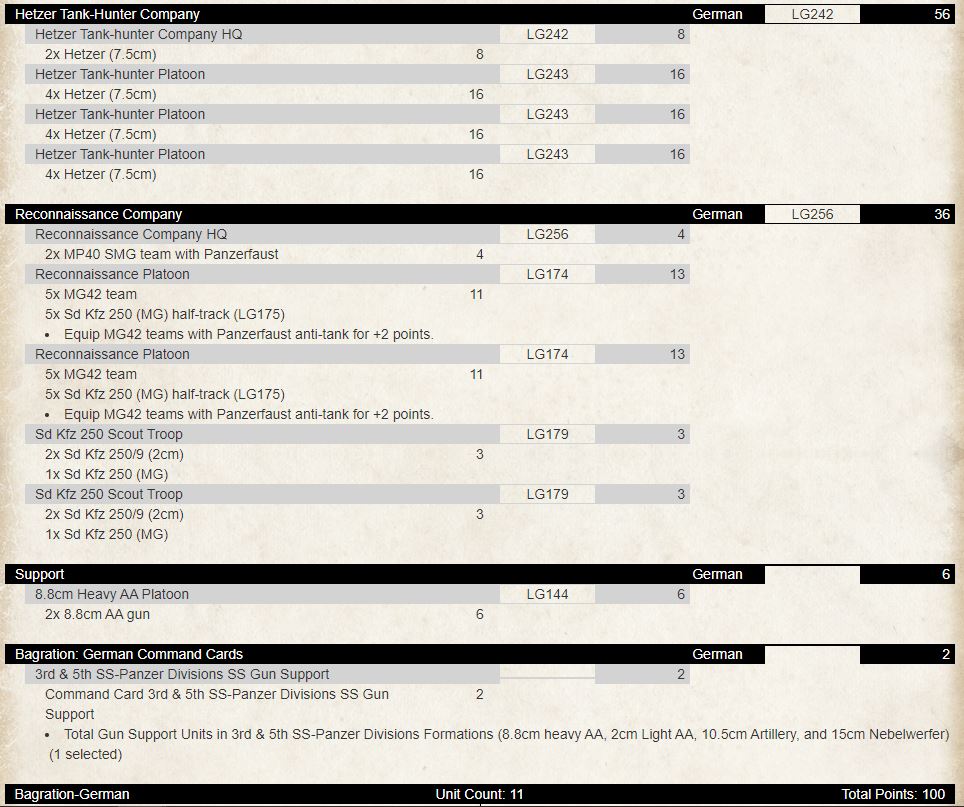 With this list, you can use the Scout half-tracks to spearhead your Hetzers deep onto the board (and hopefully on the flanks). The reconnaissance infantry/half-track troops can stay close to provide infantry support and the 88s can sit back to deal with more formidable armour and guard objectives.  I think this list would be quite fun to play as you come at your opponent from many different directions to overwhelm them with a bunch of small tanks. 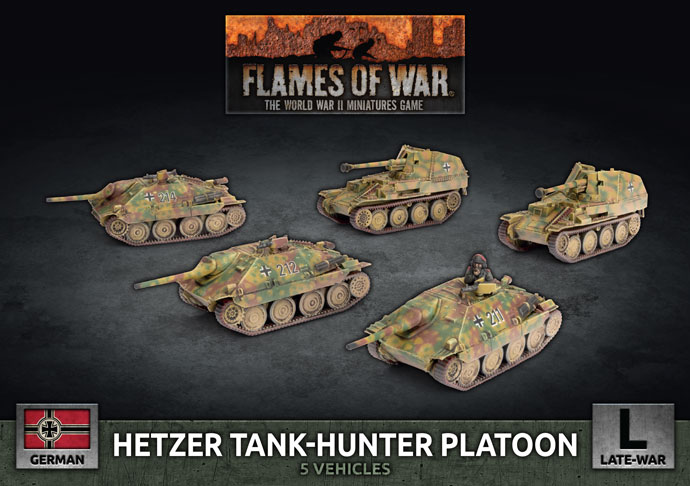 Time to Set the Ambush

However, you choose to use the Hetzer I think Bagration German has brought us a cool new addition to the Axis arsenal in Flames of War.  Whether you keep them in Ambush, pull the Stormtrooper combo on your enemy, or flood the board with numerous tank destroyers, the Hetzer promises to become a regular feature in the game.  So, get out your paint and glue and get ready to add this new weapon of war to your force and show the Allies that when it comes to German tank destroyers it really is possible to effectively do more with less!