Bagration: German is the third German-themed book in the Flames Of War Late-war series of army handbooks (after D-Day: German and D-Day: Waffen-SS). It is also the second of the Bagration series, bringing you German Eastern Front forces fighting against Soviet Operation Bagration as featured in Bagration: Soviet.

Bagration: German covers the German forces fighting all across the Eastern Front from Finland in the north to Romania and Hungary in the south from January 1944 to January 1945.

There is a great variety of formations and units available to field, from tanks and armoured infantry to grenadiers and tank-hunters.

Check out Bagration German in the online store here…

The first formation you will encounter is the Grenadier Company. These are hardened Eastern Front veterans with the full array of support weapons including machine-guns, 8cm and 12cm mortars, 5cm and 7.5cm anti-tank guns, 7.5cm and 15cm infantry guns, anti-aircraft guns, and scouts.

These confident troops also have Third Reich, giving them Last Stand 3+. They are Veterans so they pass Skill related Movement Orders on a 3+ and Hit On 3+ in Assaults. The teams of the Grenadier Platoons are armed with Panzerfausts (Limit 1), allowing them to use one team each Shooting and Assault step as a Panzerfaust anti-tank weapon.

The 78th Sturm Division had its own assault gun battery permanently attached to the divisions, the 89th Assault Gun Battalion. As well as being equipped with both StuG (7.5cm) and StuH (10.5cm) assault guns, the battalion also had its own tank escorts, or tank riders, to protect them from enemy infantry. These troops are armed with new StG44 assault rifles. Assault rifles have a longer range than SMGs, but similar firepower, so when combined with the assault guns own machine-guns, are able to keep any aggressive infantry at bay.

So keep an eye out for these new tank escort StG44 assault rifle-armed infantry, one of the many new releases coming out for Bagration: German:

Other assault gun battalions also fielded tanks escorts, as well as becoming semi-attached to particular divisions, so this formation is not exclusively representing the 78th Sturm Division.

A very common tank-hunter to begin making its appearance on the Eastern Front during 1944 was the Hetzer. This tiny ball of power is armed with the same gun as the StuG but based on widened Czech Panzer 38(t) tank chassis. It has the same level of protection as the StuG. However, it is overworked due to the position of the gun and the general lack of space in the fighting compartment. As a tank-hunter its primary role is ambushing enemy tanks so does need to be rushing about the battlefield.

To represent the Tigers fighting on the East, we have also included a Tiger Tank Company. You field up to three Tiger Tank Platoons and one of four different anti-aircraft options (more about those further down).

Late 1944 saw the widespread introduction of the Panzer IV/70 tank/tank-hunter. This low-slung assault gun is a development of the Jagdpanzer IV tank-hunter and was often issued straight to tank battalions. It has thick armour and the gun of the Panther tanks, making it rather nose heavy impeding its ability to deal with tough terrain.

This is another new plastic kit coming out with the release of Bagration: German. It will also allow you to make the Jagdpanzer IV tank-hunter.

The Wirbelwind and Ostwind AA tanks are also new plastic kits. You can build either of these kits as it comes with a turret frame letting you build both turrets. These fit on the plastic Panzer IV hull that also comes with the kit.

Representing the infantry of the panzer divisions you will find several options in Bagration: German. The first of these is the Armoured Panzergrenadier Company representing the armoured half-track mounted infantry of the panzer grenadier regiment. Keeping with our battle group theme you can take a tank unit instead of a Panzergrenadier Platoon as your first grey box option being either: Panther Tank Platoon, Panzer IV Tank Platoon, StuG Tank Platoon, or Panzer IV/70 Tank Platoon. On top of the main infantry options, the formation can also take a variety of half-track mounted weapons including 8cm mortars, 7.5cm guns, and Flame-throwers, as well as towed or self-propelled 15cm infantry guns, 7.5cm anti-tank guns, and anti-aircraft.

The bulk of the panzer grenadier infantry in a panzer division was mounted in motorised transports for travel but fighting on foot when the enemy was engaged. However, as the battles to hold back the Soviets intensified all along the front they were often grouped with tanks for fighting. With a Bagration Panzergrenadier Company, you can field tanks as part of your formation taking a Panther Tank Platoon, Panzer IV Tank Platoon, StuG Tank Platoon, or Panzer IV/70 Tank Platoon instead of your third Panzergrenadier Platoon. Though slightly less numerous than in the Armoured Panzergrenadier Company, the formation can take a number of armoured half-tracks mounted weapons as well as towed guns and weapons.

The bulk of the panzer grenadier infantry in a panzer division was mounted in motorised transports for travel but fighting on foot when the enemy was engaged. However, as the battles to hold back the Soviets intensified all along the front they were often grouped with tanks for fighting. With a Bagration Panzergrenadier Company you can field tanks as part of your formation taking a Panther Tank Platoon, Panzer IV Tank Platoon, StuG Tank Platoon, or Panzer IV/70 Tank Platoon instead of your third Panzergrenadier Platoon. Though slightly less numerous than in the Armoured Panzergrenadier Company, the formation can take a number of armoured half-track mounted weapons as well as towed guns and weapons.

If you are looking for a multipurpose gun that can know out tanks as well and aircraft you can always go for the 8.8cm Heavy AA Platoon with its AT14 and Self-defence AA abilities.Both of these guns are available as plastic kits.

There are plenty of choices for artillery, with the Wespe, Hummel, and 10.cm Artillery Batteries. If you like to make a bigger splash on the table you could also go for the Salvo template bombardments of the 15cm Nebelwerfer Battery or the Panzerwerfer 42 Battery. These rocket launchers saturate a large area with their rockets, hitting it with a 10”/25cm x 10”/25cm bombardment delivering Firepower 4+. The Panzerwerfer 42 provides mobility for relocating as well as providing armoured protection against light weapons. The Panzerwerfer 42 is a new model for Bagration: German.

The book also contains colour guides for painting your models, guides for basing your infantry and guns, and a table guide to Eastern Front terrain. In the Bagration Fortified City Battles section, we introduced a Linked campaign using the Missions in the book as well as some form the Flames of War rulebook.

The Missions include a Fortified Defence Mission called Onslaught that uses Bunkers, Nests, Barbed Wire, and Minefields. The second Mission, Hammering the Line, has the defender less prepared with their flanks threatened. The final Mission sees the defend withdrawing ahead of the enemy attack, delaying them long enough to move back to their next defensive line. 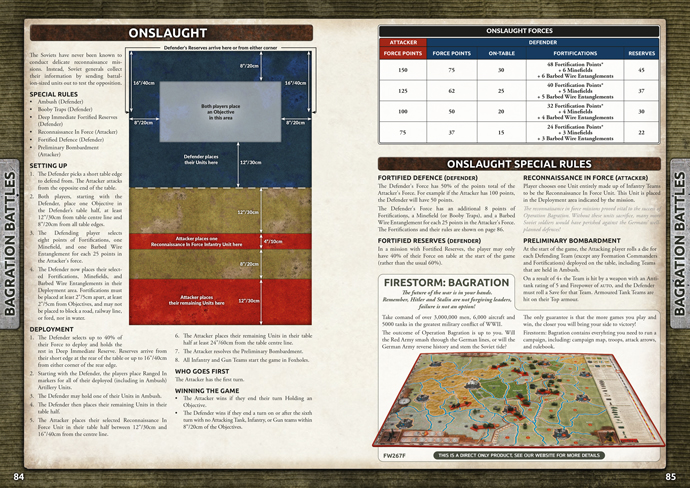 All these Missions and the card fortifications needed to play Onslaught are all available in the River Assault Terrain Pack. Also available is The Race for Minsk Campaign, a narrative-driven system where players get to create their own heroes and fight on the marches of Eastern Europe and beyond.

The back of the book contains a comprehensive catalogue highlighting all the packs you need to field a force from Bagration: German.

Whether you are already playing a German Force, or just beginning, I’m sure there is something inside Bagration: German for you.

So pick one up at your friendly local gaming store.