On the World War III: Team Yankee battlefield the undisputed top predator is the M1 Abrams and its variants. With a front armour value of 18 ranging to 21 and a main gun AT rating of 20 for the 105mm, or 23 for the 120mm, the Abrams hits hard and can soak up massive amounts of punishment. This is made even better by a Hit On rating of 4+ and an amazing remount of 2+. But this battlefield titan is not unstoppable. 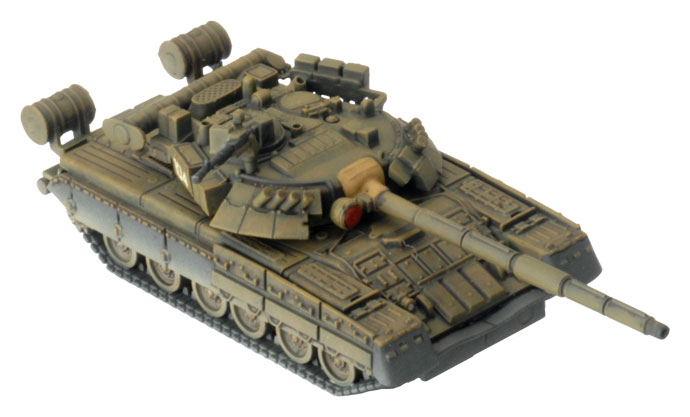 The main tactic for Warsaw Pact and Soviet players to take these machines down was always to go with quality over quantity. An M1A1HC for instance costs 18 points compared to a T-64 which costs 4.3 points. This means that the Warsaw Pact can put at least 4 T-64s on the table to every one M1A1HC. This solution however is imperfect for World War III players. Sometimes you want to play a small elite force, or the wallet just won’t let you buy the 20 T-55AMs (and the paint) you would need to begin to equal the points your opponent would spend on 4 M1 Abrams (the basic model). This has traditionally left the gamers who want to play forces of the more communist variety at a loss…until now. With the new core set and the World War III: Soviet book you can get your hands on the T-80. This marvelous tank, while remaining most definitely Soviet in design and application, has what it takes to go toe to toe with the M1 Abrams. Let’s take a closer look.

The Warsaw Pact forces of the 70s and 80s were set on a very specific type of battlefield doctrine that caused the form of their tanks to follow the function of their strategy. This resulted in lighter, smaller, though heavily armed main battle tanks that did not match the size of western behemoths like the M1 or Leopard 2. Part of this was the recognition that the communist forces would maintain the edge in terms of numbers through vast armies of conscript troops.  This necessitated simple designs that were faster and cheaper to make and more easily crewed by troops with less training. Moreover, these tanks such as the T-72, were intended for widescale export so they skimped on technology in favour of ease of maintenance as they could be put in service in remote locations ranging from the desert to the artic, far from technical support.  The T-80 however was a partial divergence from this trend. Initially, not intended for export, the T-80 was loaded with the current innovations in armoured warfare, while still staying true to the Soviet strategy of having smaller more numerous tanks. The T-80, though it looks superficially like other Soviet tanks of the time, has better armour (supplemented be Explosive Reactive Armour- ERA) and a gas turbine engine that gave it outstanding speed. For armament it had the same autoloaded 125mm gun of its less technical T-64 and T-72 brothers, but it had the option for using the latest generation of gun barrel launched anti-tank missiles.

The T-80 has the stats to contend with the other NATO tanks. The front armour of 20 outclasses all iterations of the M1 except the M1A1HC which only edges it out by 1 point. Because of this, it can definitely take a punch! (The Abrams, only has one point better in side armour too.) The T-80’s side armour has ERA making it side armour 16 against HEAT weapons.  This puts it neck in neck with the M1’s Chobham armour which also has a side armour rating of 16 against HEAT weapons (Though passengers can’t ride on tanks with ERA, because they would be blown up when the ERA goes off!) 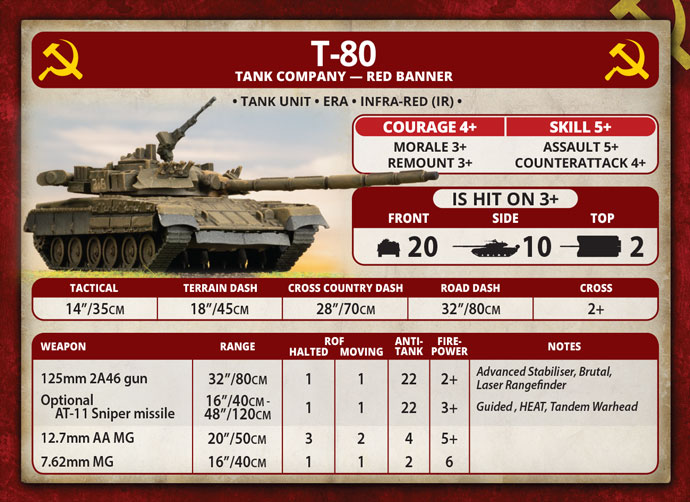 In terms of mobility both tanks are the same in all respects and both sport advanced stabilizers for 14-inch tactical moves and have a cross of 2+. I imagine that this similarity is due to the fact that both have gas turbine engines and represent the pinnacle of tank automotives for both major super powers in the mid 80s.

This brings us to firepower, which is where these tanks diverge. The M1’s main gun can be a 105mm or 120mm canon depending on the variant and both are very good guns. They have 2 dice of shooting whether they are stationary or not, have a high AT, a range of 40 inches, and 2+ firepower. The 120mm in particular has a whopping AT of 23 due to it having cutting edge, fin stabilized depleted uranium long rod penetrator rounds! But this canon is very much maximized for anti-tank work. On the anti-troop side, the M1 comes in a little light at 5 dice of machine guns. The T-80 is different in the weapons department with a much more diverse armament. The 125mm Soviet gun has a range of 32”, rate of fire of one (whether moving or not) the brutal rating, and is AT 22 and a firepower of 2+. This makes it equally deadly against both infantry and armoured vehicles.  The lower rate of fire makes the T-80 maybe slightly less competent in destroying armour… but wait, there is also the barrel launched Sniper missile! This AT 22, fire power 3+, Guided, HEAT weapon can reach out to 48 inches (with a minimum range of 16 inches) actually giving the T-80 a longer reach than the Abrams. Being the pinnacle of anti-tank weapons for the Soviets, this missile has the Tandem Warhead rule. This means that thought the Sniper Missile is a HEAT weapon, armours such as Chobham, Bazooka skirts etc. do not cause a boost in side armour ratings. So, go ahead and shoot an M1A1HC or Leopard 2 in the side armour with this missile and you can have that satisfaction of going straight to the firepower test! 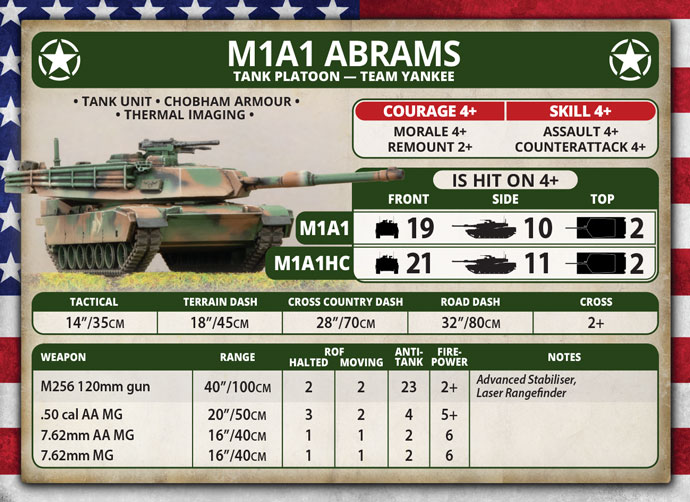 So far, we have seen that the technical details make the T-80 pretty close to the other NATO MBTS but there is a difference and that boils down to training. As we discussed earlier in the article, the Warsaw Pact doctrine in the 80s was to rely on large numbers of conscript troops and use numbers to overwhelm their adversaries.  The values on the T-80’s unit card represent this. The Hit on Number is 3+, Skill is 5+. These numbers are not so favourable compared to the typical NATO ratings. The American tanks for instance are hit on a 4+ and have a skill of 4+. The difference is represented in the points values with the T-80 running at about 7.3 points each where the comparable NATO tanks cost more. Because of this the Warsaw Pact forces will always have a slight edge in numbers because of the decrease in training. The lower Hit On value may also not be such a serious issue. With the armour ratings on the T-80 being up there with the NATO MBTS, you can compensate for the lower hit on number by keeping your opponents to the front and relying on the tank’s considerable manoeuvrability.

There is also another option to adjust for the T-80’s decreased stats… you can go elite. The T-80 Shock Company in the new Team Yankee: Soviet book represents the best Soviet Tankers of the time and this brings both the statistics and points costs into line with most NATO armies. The Hit On number goes to a respectable 4+ and the skill goes to an excellent 3+. (This opens up a lot of new options, but since the T-80 Shock Company is fairly different from other Soviet Formations and will be covered in a separate article.)

So far, we have looked at the statistics, but there is another, real world, consideration with the T-80.  By Soviet standards it is worth a lot of points! This means that for a World War III Team Yankee player that is either new to the hobby or who is on a budget, they can get to the 100-point limit fairly quickly by purchasing or painting fewer tanks. 10 T-80s is 79 points. (89 points if you give them missile upgrades.) That is just 2 boxes of models. Previously Soviet players would have to have relied on T-64s which would require at least another whole box with maxed out upgrades to get into the same ballpark points wise. So, if you are new to the game or just getting up to speed with a Soviet force, T-80s are your first choice to get not only modern options to take on NATO players, but also to get a bunch of points on the table with fewer (but seriously cool looking) models.

Time to Unleash The T-80

In this brief tour of the T-80 and how it stacks up to the M1 Abrams we have touched on the similarities and differences between these mighty machines. Now you should have a clear picture of just what the T-80, as a new battlefield predator, can offer the Soviet player in Team Yankee. All that remains is to get your Warsaw Pact Forces together and go forth to destroy the decadent and corrupt capitalists!