Some would say the British Small Box Girder (SBG) bridge is descended from the famous Bailey Bridge.

“I take it you mean that glorious, precision-made, British-built bridge which is the envy of the civilized world?”

Hello chaps and ladies, let’s talk AVRE Small Box Girder (SBG Assault) bridges and how to make your own to help liberate Northern Europe from Jerry. About a dozen years ago while visiting family, I found Flames Of War through a dear friend and shipmate who had an FLGS in Augusta, Georgia (Norman Schwartz at Arsenal Games – now closed.). But at the time the game really didn’t catch my fancy, I’m a Navy guy. About the same time, after a close call with cancer, my bride found an FLGS (Texas Toy Soldier (TTS) in Dallas) and she strongly encouraged me to pick up a hobby to rejoin the human race. A group of great guys at TTS play Flames Of War and I got hooked.

I chose the British Forces as virtually no one else here played them as a primary army. A few months later, the group at TTS were planning to do their annual D-Day game. I was intrigued, and being a student of WWII history for decades, I wanted to play using General Sir Hobart’s “Funnies”, particularly the AVRE and its assault bridge. I wonder often if General Sir Hobart’s funnies were used as he was General Bernard Montgomery’s brother in law. Hmm? Nevermind. Alas, I was told I would need an SBG mini. “No mini, no bridge on table”. At the time, no one here knew of a commercial source for a model so I decided to make my own. Heck, I served in two Seabee units for several years, how hard can it be? Two notes. There is a bit of fiddliness to this process and those with OCD (CDO) will either hate or love the process.

Right. So the Small Box Girder (SBG) assault bridge was a British project which in short order was copied with different tweaks by other nations. But in essence a SBG is mostly a metal bridge carried/mounted on an armored vehicle to cross obstacles – either man made or a feature of terrain, to be deployed under fire. SBGs can either be solid/fixed or fold in half. I chose to recreate the kind that fold, both for more drama (eye candy), utility (such as seawalls of different height) and it’s more dynamic.

Note, these bridges are not going to be something slapped together quickly. These are the items I use, but various substitutes should be generally available most places in hardware, hobby stores, and many are likely in your work area. In many of the accompanying figures, I use a previously made SBG as a visual reference. Let us begin. 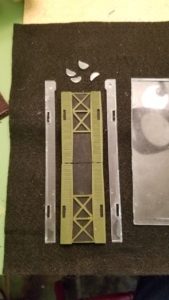 First cut the sides from the CD case cover. I cut from the inside, first removing the annoying small half-circle discs. You want to preserve the smooth outside edges of the case. These are what I will call side rails. Do not throw away the CD case yet.

Second, parallel to one side where the side was removed, cut of a full length piece of the case,1 and 5/16 inches wide (33mm). This will be the primary span. This measurement was calculated based on: Next, on the other side of the CD case lid, cut out a small 1.5″ square. (The more proper square the better, but some slight variance can be accommodated during construction.) Then cut the square in half, but it must be (or close enough) 1 4/16″ wide (31mm) – just a wee less narrow than the main span (by the width of two toothpicks). This will become a shelf below the bridge on which the hinge will be super glued. Score (scratch up) one side of these shelf pieces with sandpaper.

Shelf Hinge sub-assembly. Now score (I use an old screw driver) the sides of the hinge that fold towards themselves. Centering them, glue the small shelf pieces with the wide parts butted against the hinge but avoid getting superglue in the hinge. After the hinge has dried, glue 5mm long bits of plastic rod/sprue (to be pylons between the hinge shelf and spans) on the opposite side of the hinge, in the holes which screws would be used in normal use. Then glue toothpicks parallel to the sides. One end flush with the shelf edge. 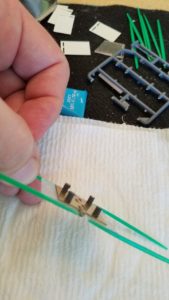 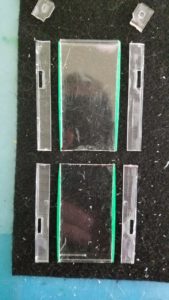 Next, let’s sort out the main spans. Mark off the ends (with the CD case hinges) with a marker- the same length as the main span. Cut off the ends of the sides of the CD case. On the bottom of the CD case/center span there may be an angled ridge which helped to keep the CD case close. I preserve that to help bridge placement during gameplay. That ridge will also help as a reference as it faces down. Measure the half way points of the side rails and main span. They should be the length of a toothpick (TP). Mark and cut them. Glue a toothpick to the outboard side on the underneath sides under the smooth edge. Next you are going to make two Xs on each span on the ends away from the hinge. 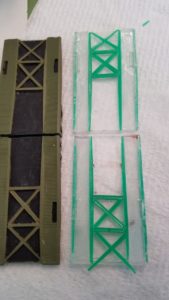 Start by cutting and taking the middle third of toothpicks and glue down ‘girders’ at the halfway and quarter points. You can use the other thirds to make the diagonal girders. 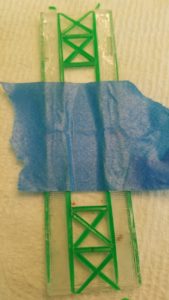 When all parts are set, temporarily tape the two main spans back together lengthwise with painters tape or similar easy removable tape. Mark the tape on the bottom side to show where the hinge barrel is

You are going to glue/cement the 4 (styrene/sprue rods) pylons to the underneath of the main span(s). Score patches on the bottom side of the spans. Apply glue/cement to the rods, then carefully center the shelf sub-assembly so each pair of ‘pylons’ will be glued to the span pieces. I find p/s glue is more forgiving in this step while centering on the multiple X and Y axes. Hold in place with gentle pressure. After 30 seconds or so, you can gently wrap the painter’s tape around to the hinge area to hold pressure. Set aside to get a good bond. (I usually let this set overnight.) When set, glue the trailing toothpicks down to the corners of the main span. Important – Rushing this step can unset the pylons. Right. Last bit of assembly. One last toothpick per bridge side. Cut a toothpick in half. Start at one bridge half. Glue the thicker side of the toothpick to the bottom edge of the span near the hinge, gluing it down to the out side of the bottom toothpick on the hinge shelf. When dry, cut the toothpick off flush with bottom of shelf. Next take the same piece, dry fit, then snip off a tiny corner as necessary, and glue it from the top back to the shelf to make a W. Repeat. WW Now do the same for the other side. You may of course make more Ws, but the party is in 3 months and you want 2, maybe 4 of these beasties. Tidy up by trimming off excess bits. 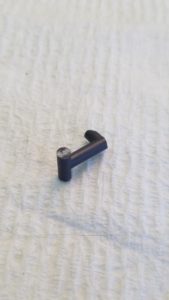 Ok. Done. Well, one last OPTIONAL step. Find a bit of sprue or similar to make a hook on your bridge. 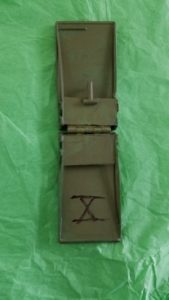 Glue it to one of the down facing sides of shelf hinge. You can field your AVsREs with their SBG’ tee-pee’d on their decks or you can do something a bit more dynamic. The idea is to use a loop of thread or dental floss around your tank hooked on the bridge. You’re an engineer now, you can sort that out. For your officers, tell them to make a loop of dental tape, thread, hobby ‘cable’, etc 9 and 1/2″ long. Loop your ‘cable’ around the hook, through the hinge/pylons, around your tank lengthwise, go under, over the bow and hook the cable back on the hook of the bridge.

Now, it is just a matter of priming, painting and detailing your bridges. I use a rattlecan of green to prime, then base coat with whatever I use on my Brit armour – usually Russian uniform. Then I use flat black on the insert areas. A bit of a wash will enhance the ridge bits on the side rails. Now, for me, a big X to denote this is my 10th bridge I’ve made. I guarantee your mounted SBGs will be the belles of the beaches. Remember, the bridge is deployed during the shooting step after movement. Good Luck! 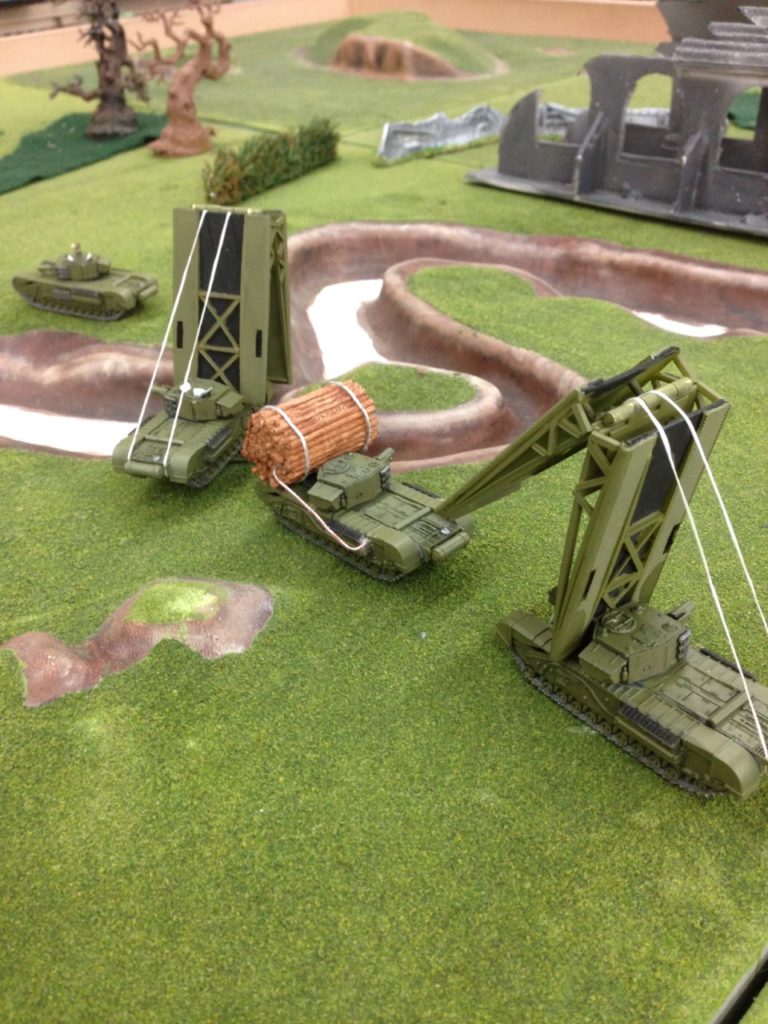 If you’re after more Funnies inspiration, you can of course check out Adcock’s Funnies…