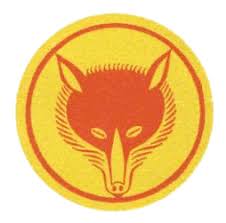 The 8th Armoured Brigade were one of the most experienced British Armoured Brigades in WW2. They had initially been formed in July 1941, from parts of the 6th Cavalry Brigade in Iraq and Syria and began training with Honey tanks. In 1942 they were brought up to strength with more Honey Tanks and Grants, only to have then taken away just before the Battle of Mersa Matruh in June 1942, and given as replacements to more experienced units. They were joined by the 3 rd RTR Lt Col “Pip” Roberts, and then in August sent to join XXX Corps as part of the 10th Armoured Division.

Their first action came at the end of August, at the at Bir Ridge in the Battle of Alam El Hafa, against Rommels abortive attack on the right flank in the prelude to the Second Battle of El Alamein. They took part in this battle as part of the 10 th Armoured Division and in Operation Supercharge, and had at the time 24 Crusaders, 57 Grants and 37 Shermans. They also were involved in the Allied push into Tunisia and the Mareth Line in early 1943 with XXX Corps as part of the British 8th Army. The Order of Battle in October 1942 was as follows:

They fought the remainder of the Axis forces in Africa until they surrendered on the 13th May 1943. Interestingly they were involved in some of the first battles against the Tiger I, in the Battle of Wadi Akarit, around the 6th and 7th of April. They had been fighting almost constantly for almost a year and at the end of the fighting in Africa, they were one of the
most experienced Brigades in the British Army.

The Brigade then made their way back to England in December of 1943, and after a period of extended leave, they were told they were going to be involved in the Invasion of Normandy, soon after the New Year. The high level of experience that they had gained during their Africa fighting, contrasted with many of the other units that were earmarked to be involved in the Normandy Invasion, many of which, had not seen any fighting since the Battle of France in 1940.

To spread the experienced units out to the other Armoured Divisions and Brigades, two armour Regiments from the Brigade were exchanged out. The 3rd RTR was exchanged with the 24th Lancers from the 29th Armoured Brigade in the 11 th Armoured Division, and the Staffordshire Yeomanry was exchanged with the 4th / 7th Royal Dragoon Guards from the 27th Armoured Brigade, another Independent Armour Brigade. There was also a new support regiment of artillery with the new self propelled 25pdrs (Sextons) and an attached Motor Rifle Battalion of the Kings Royal Rifle Corps. 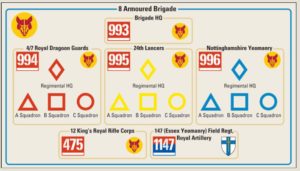 The 8th Armoured Brigade had worked closely with the 50th Northumbrian Division in Africa, so it made sense they would help them in the assault here. Two Regiments of the 8th Armoured Brigade had been training with special DD Sherman (Duplex Drive), amphibious tanks, with the tanks designed to lead the assault onto the beaches and to provide cover and support fire for the assaulting infantry. Unfortunately there was not enough Sherman DD tanks available in time for D-Day, for the whole Brigade, and the 24th Lancers had standard Sherman tanks issued. As such, they could not join the battle until the beaches had been secured.

The Primary Objectives on D-Day for Gold Beach was to seize the town of Bayeux, the Caen-Bayeux road, and the Port of Arromanches; the Secondary Objectives were to make contact with the Americans landing at Omaha Beach to the West and the Canadians landing at Juno Beach to the East.
The DD tanks of the Nottinghamshire Yeomanry (Sherwood Rangers) supported the assault on the Jig Green section of Gold Beach with the 231st Infantry Brigade and followed by the 56th Infantry Brigade. While on the King section of Gold Beach the 4/7 Royal Dragoons helped support the attacks of the 69th and 151st Infantry Brigades.

As the water was very rough and choppy on D-Day, the Sherman DD tanks were released only a few hundred yards out of the shore, instead of the 2 miles out as first planned. This turned out to be very lucky for both Regiments involved, as even that close to shore, tanks were lost to the rough seas. The 4/7 Royal Dragoons lost 5 tanks, and the Sherwood Rangers
lost 8. If they had been released 2 miles out to sea as planned, it is very likely most would not have made it onto the beach.

This unexpected armoured assault on the beach surprised the German defenders, as they had not expected any Allied armour on the beaches until at least 5 hours into the invasion. Throughout the day both Regiments had all three squadrons committed continuously, and all objectives were obtained by the end of the day.

On the 7th of June (D-Day +1), the 3 rd Regiment of the Brigade landed, the 24th Lancers, as well as their other supporting units. For the next 25 days the Brigade was involved in supporting many infantry divisions (50th and 49th ), in successful assaults on German positions around Bayeux, Tilly-sur-Seulles, and Villers Bocage. But the fighting was very heavy, with
the British facing the majority of German armour in Normandy, as well as hand held anti tank weapons like the Panzerfaust, and anti tank guns like the Pak 40. Over 25 days, 146 tanks were lost or put out of action, while claiming 86 German tanks and self propelled guns knocked out over the same period.

The 8 th Armoured Brigade would continue fighting through France and into the Netherlands and Belgium and finally into Germany in 1945 until the German surrender on the 4th May 1945. Having fought from one end of Africa to the other, and then chased the Germans from France and all the way back to Germany, and were involved in almost all of the major
battles along the way.

So how am I going to represent this on the tabletop? Well as this is for the British D-Day book release, I should probably start there! So it would seem picking a Formation would be the first step. As this Brigade was involved with the Landings on D-Day, picking a Sherman DD Armoured Squadron Company would seems apt. As in the early days of the D-Day battles this was exactly how this Brigade was organised, and it was not until July 1944 they moved back to standard organisation. Also, I need to be a bit different, so I chose the 24th Lancers, that is because they were a bit different too ……

The squadron had a strange unit organisation, as there was not enough available Sherman DD tanks, they had standard Sherman III and Firefly tanks, but still had the Sherman DD tank organisation. So they had as standard troops of 3 Shermans, but kept their Fireflies as a separate Troop of 3 Firefly tanks. This was different to how most other standard Sherman equipped units would operate, as they would typically attach one or even two Fireflies per troop (later in 1944) in case they ran into heavy German armour that their normal 75mm guns could not penetrate. They also had a Firefly attached to each Squadron HQ unit, so a full HQ for the 27 th Lancers would have 3 Shermans and a Firefly (12 pts + 5 pts) for 17 pts. 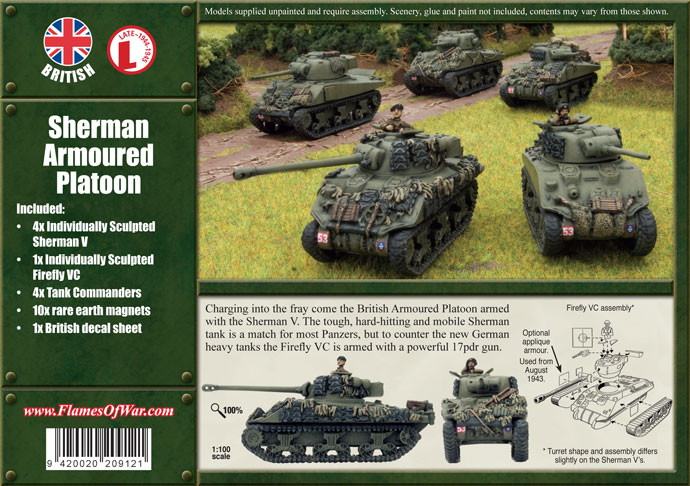 Also I thought I could take this opportunity to use up some old models from the metal/resin British Sherman kit (BBX08) that had the wonderful stowage and other things like track lengths modelled onto it, and to make them even more different, I was going to get special decals made up to match their historical markings. I think I’ve mentioned this before, but I really love building a force like this, as I then have to do extra research to find out what markings the Formation and support tanks have. Luckily as you can see above, in a previous article, they have done a lot of the hard work for me. So if I chose B Squadron, of the 27th Lancers they would have a yellow square, on the side of their turrets, a red and white 995, for their
arm of service flash, and the yellow and red Fox Mask for their unit symbol. Similarly it has the information for any attached Motor Platoons (475) and the Sextons (1147) that historically supported the 8 th Armoured Brigade. See below the Command Cards for using Sextons and M5 half tracks that the Motor Platoons of the Kings Royal Rifles would have used to keep up with the Shermans. 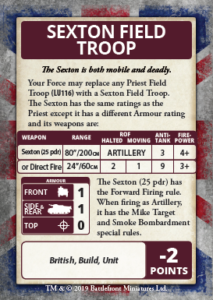 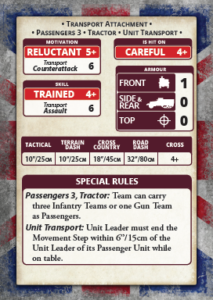 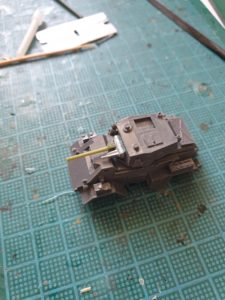 Also in another attempt to be different, I really felt that I “needed” Humber IV armoured cars, and Humber scout cars in my Force. As the Brigade did have Humber Scout cars as communication vehicles between the Scout Stuart tanks and the Squadron HQs. I mean don’t we all “need” these…… In game the Humber scout car and Dingo scout car would almost the same, stat wise, and the same for the Humber IV and the Daimler. So I converted
up some Humber IVs by using the Mid War Humber kit and cutting off the 15mm Besa MG, and adding a bit of plastic and the spare 2pdr gun barrels from the MW Valentine kit, and viola! A Humber IV armoured car! Add a Humber Scout Car, and you have a Humber Armoured Car Patrol, for 2 pts. 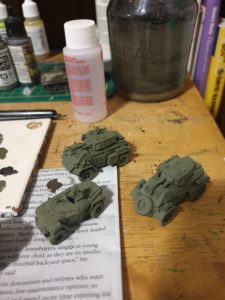 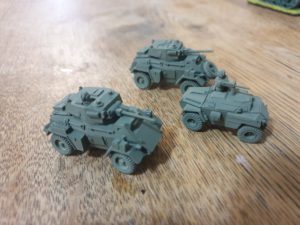 So let’s have a look at a 100 point list using this force…. I will say that the HQ is not strictly legal, but I’m sure in friendly games with reasonable opponent, if you explain what you are trying to do, most will let you re-create an historical force like this. Especially if you have gone to the effort of researching and modelling everything, just don’t expect to be able to take something like this to a tournament.

So from the list above, I have plenty of points in my Formation, with some versatile 75mm Shermans and also some Fireflies to take out any really tough armoured targets. Some of the lovely new plastic Stuarts to spearhead and harass light armour, and some Crusader AA tanks, to just hoon around and look cool! I am really looking forward to the new plastic Crusader AA Troop, I think it will be a blast to make and also to use on the field. I really do like self propelled AA for some reason……

We have the Motor Platoon to either quickly hold or take an objective, and two units of my new favourite Humber Scout cars to either block off/limit an opponents spearhead, and generally just harass enemy light units, and make infantry think twice about getting out of their foxholes and advancing.

I also have the Sextons, which with their 25 pdrs can be a reasonable anti tank unit in a pinch, but also give me mobile artillery and smoke options, and the cheaper cost compared to the Priest, allowed me an extra Armoured Car Troop. 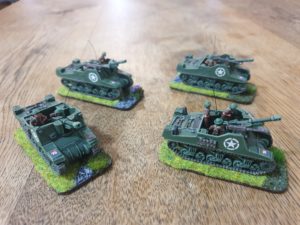 Also another of my favourites is the Typhoons! I am also really looking forward to the new plastic kits that Battlefront will be bringing out for their planes. 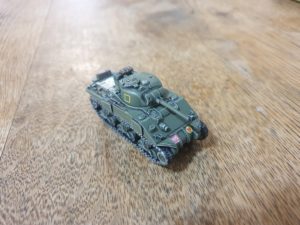 I have painted up a test Sherman, to see how the custom decals went, and also how I like the paint scheme I “borrowed” from Chris and his Big 4 of Late War British- Pretty happy with it …. now to paint the extra 20 or so models…

I hope to have an update for you soon with some more units painted and also some info on the other units the 8th Armoured Brigade would have had in support! 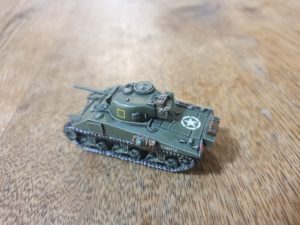