Up until now, my Late War British forces have all been based on the 7th Armoured Division, but I’ve been thinking that might have to change. I love the Churchill tank almost as much as the Cromwell (they’re just so boxy!), and have had a passion for them since building the old Airfix kit as a kid (although I didn’t enjoy the twenty or more parts for each track assembly!).

I started thinking about how I could keep the task relatively small, and came to the conclusion that, with a judicious rejigging of my existing stuff, I could do it fairly easily. I already have a motor company that could be used for the basis of a rifle company, and some support that can be transferred over. That means all I really need to do is get some Churchills painted up and I’m pretty much there. The force will have a battle-worn rifle company supported by a half-squadron of Churchill tanks, a troop of Crocodile flame-tanks, and a troop of M10s for anti-tank support. 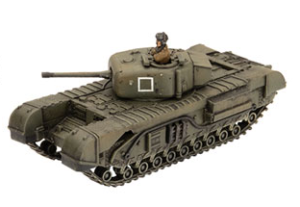 My rifle company will be just the bare bones, an HQ and three weak rifle platoons (all that are left after several weeks of hard fighting). I can do this by adding three more rifle teams to my motor platoons. Sure, they’ll have an extra Bren gun, but I figure they kept it when they had to disband the third section, so that’s fine. Three platoons will give me plenty of flexibility as I can hold two objectives and still have a platoon free to manoeuvre.

Having played with even weaker motor platoons, I’m not worried about the low team count as they should always have plenty of fire support to shoot them on to the objective, and if they are charging, they’ll cut the enemy down to size before they can counterattack. 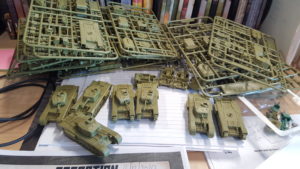 The Churchill tank brigades found that supporting an infantry battalion with squadron (a company-strength organization) of tanks was a bit clumsy, and soon changed to a half-squadron organisation to allow them to provide support wherever they were needed. My half-squadron will have an HQ of a Churchill (95mm) close-support tank for an ad-hoc artillery capability, with a spare uparmoured late-model Churchill (75mm) available for bigger games. The first troop will have another uparmoured 75mm, a basic 75mm, and a 6 pdr-armed Churchill, while the second one will just have two 75mm and one 6 pdr. The 6 pdr guns give me a bit better anti-tank capability against heavy tanks, while the 75mm guns give me a good solid 3+ firepower against most targets and are just as good against medium tanks.

The Crocodile flame-thrower tanks give me an excuse to make some of this interesting variant with its fuel trailer, and should make sure that my infantry assaults are successful. I’ll make a full troop of three of these, although I can only fit two in a 100-point force.

The last component will be my existing M10 (17 pdr) self-propelled guns. The Churchill regiments lacked the Firefly (17 pdr) tanks of the other armoured regiments, so often had M10 self-propelled anti-tank guns attached. They should come in handy if my opponents elect to bring lots of heavy tanks! I’d like to make some of the new plastic kits to replace my old metal and resin ones, but I’ll keep the ones I have for now.

All-in-all, it should be a fairly solid attacking force. I can’t really defend as I have too much armour, and I think I’ll be a bit slow-moving for mobile battles, so a solid Attack battleplan it will be. I don’t have any reconnaissance or artillery, but aggressive use of direct fire and a quick advance should mean that I really won’t miss it too much.

Hmm, time to pick up a couple of boxes of the new Churchills…