After the successful Normandy D-Day landings, and the hard fighting at
Caen and lower Normandy to hold tha Allies in check, the Germans were taking massive losses. Just from the D-Day landings on the 6th June until the 18th June – the German 7 th Army had lost 97,000 men, including 5 Generals. On the 28th of June the 7 th Army Commander General Dollmann died of a heart attack.

The pressure on the German forces was enormous, and they were slowly being forced back through the Normandy bocage, until they finally broke with the Allied Breakout in Operation Cobra in late July. Finally with the German forces retreating towards the Falaise Gap (from Sept to Aug) to try to withdraw safely into Germany, both the 9th Panzer Divison and the 116th Panzer Division played roles in trying to slow down the Allies and allow the other German forces to retreat.

9. Panzer
The 9th Panzer Division had been fighting the Russians on the Eastern Front up until April 1944, and had been sent to France to rebuild in May 44, like many other Divisions that had been mauled on the Eastern Front were doing. It took replacements of 31 Panzer IIIs, 74 Panzer IVs, 20 Assault guns and 15 Panthers and 200 other vehicles.By the time the Allies invaded in D-Day with had a strength of around 150 tanks and 12,800 men, but they had not had time enough to sufficiently train up to their previous standard, but still in better conditon than other Divisions. They were not really deployed in strength until after the breakout of Cobra, to try to halt the Allied advance, and as it was committed in only bits and peices as units arrived at their start points, they never really gathered enough strength to stop the Allies. Instead they should have been committed in one cohesive counter attack.They did escape the rout of Falaise, but had lost most of its vehicles. 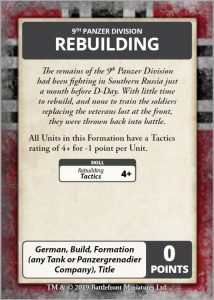 In the D-Day German Command Card pack, you can take a Formation that represents this division. To represent their lack of time to rebuild and give the new recruits sufficient training, they have the Rebuilding rule, which gives them a reduced Skill value of 4+ on any Tactics roll. So all units in your Tank or Panzergrenadier Company Formation must take this, for -1 point per unit.

While this may seem like a bad thing, depending on what you take, this
may not be so detrimental and the extra points you get can get you some extra units. I have made up a Panzergrenadier Company below to show how this can be used. So using the 9th Panzer Division Command Card, I have managed to get
an extra 8 points, which I used to get two extra scout troops, or give both of
my Panzergrenadier Platoons Panzerfausts and Panzershrecks, depending how you look at it. Also in a lot of the cases the units I gained the points from, don’t use a tactics movement order very often(eg. Gun teams would only use it for digging in) so there is really no huge penalty for them having the Rebuilding rule. Also I have managed to use units that would represent fairly well a historical force of the 9th Panzer Division, as it would have fought at the time.

116. Panzer
The 116th Panzer Division, also known as the Windhund or ‘Greyhound’
Division was made from the remnants of two different divisons in March 44 in Western Germany. The 16 th Panzergrenadier Division ( that had been mauled on the Eastern Front near Stalingrad) and the 179th Reserve Panzer Division, a second line formation that had been on occupation duty in France since 1943, were combined to form the ‘Greyhound’ Division. They were still training in northern France after the D-Day landing, and were not committed to fighting until the 28th July, and saw heavy fighting against the US 2 nd Armoured Division around the 29th and 30th July. They were then used in a defensive role from then on, in trying to slow the Allied advance and allow the retreat through Falaise. It was given the task with the 2nd SS Panzer Division of holding the Pocket open to allow the other forces to withdraw. Finally they did manage to retreat through the Gap, but had only 600 infantry and 12 tanks left. The D-Day: German Command Card that represents the 116th Windhund
Division, has not only the Rebuilding rule, but also Rearguard. Rearguard
means they lose the Third Reich rule that German forces usually have, and
instead have a Last Stand of 5+. To make up for this you -2 points from every unit in the Formation. This will make your units very brittle as they start to take casualties, so it would be a good idea to take larger units to make up for this, if you can. I feel to get the best out of this card, it should be taken with a Panzergrenadier Company, which can afford to take losses. Taking it with a Tank Company does not provide much benefit, and it takes away the traits German armour usually needs to succeed. 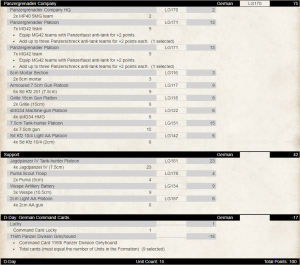 So by using the 116th Command Card I saved 18 points, and I have tried
to maximise every unit in the formation. This force can pump out a huge
amount of firepower vs infantry, and has Pak 40s and Jagdpanzers for taking out Allied armour. The light AA platoon can also be useful for denying a flank against light armour and infantry, as well as giving the Jabos second thoughts. 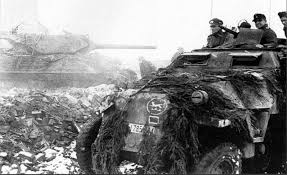 I think this would be a fun list to play, just make sure you move your HQ
around to where he may be needed for last stand rolls. 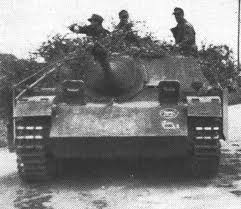