One of the many neat bits of kit you can find in D-Day: German is the Puma and its variants. To give you a bit of background on this unique beast before you bring it to the table we’ve unleashed another great historical article form the Flames Of War archive.

“The best patrols I had were those with clean guns. Even worthwhile targets were only reported and not engaged; that is the business of others. A troop leader with a tendency to bang away is useless for reconnaissance purposes since he is soon located by the enemy and chased like a rabbit. A report giving the location of an enemy tank leaguer is of infinitely more value than five shot-up lorries.”

The 234 series of armoured cars was one of the most advanced concepts in wheeled fighting vehicle designs to appear during the war. It had improvements in armour, speed and range. In its original 1940 concept the 234 series was to operate in hot climates. The Czech firm Tatra produced its air-cooled V-12 diesel engine that had an out put of 220hp. The Bussing organization made the hull, which was made of monocoque construction. Daimler-Benz and Schichau were jointly responsible for the turret.

The Puma also addressed the most common complaint among armoured car crewmen; the lack of firepower when forced to engage the enemy. It included the same 50mm KwK L/60 gun carried in the Panzer III Ausf J and L tanks in a cramped enclosed turret with all around traverse. The gun did feature a muzzle break and the vehicle carried 55 rounds for the main gun. The weight of the 50mm gun and turret did result in the loss of some speed for the Puma, but this proved to be insignificant in the vehicles combat performance. 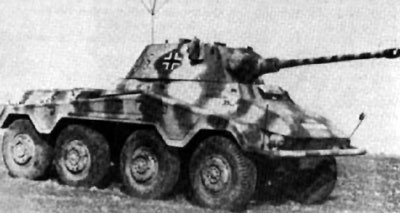 By the time of the Normandy campaign the basic organization of the armoured recon battalion had changed from its original 1939 organization.

In practice this organization was only theoretical. The Pumas were to make up the Panzerspähkompanie of all Panzer divisions, but by the summer of 1944 there were not enough Pumas to fill the organisational needs of Germany’s Panzer divisions. The combat techniques of the Puma were to see but not be seen and engage the enemy only when necessary. The radio was its most important weapon for its primary mission. Most of the time the Pumas were organized into three car groups for intelligence gathering missions on enemy movements and locations. Of all the missions the Puma crew were assigned infiltration was the most difficult. Oberst a.D. Fabian von Bonin von Ostau explains: “The initial penetration into unknown enemy territory was difficult. For this purpose our own local attacks were taken advantage of before the enemy could recover his balance. When one had achieved some penetration, the advance became easier.”

German crews learned important techniques to improve stealth such as easing the vehicles in to gear and running in low gear so they made very little noise. This was opposed to American crewmen who were known for ‘gunning’ their engines and thus giving away their positions to a skilled observer. The Puma were used to find the enemy, screen the flanks, and the companies were only used together in certain situations such as to screen the division during a withdrawal. According to Heinz Guderian they conducted “the ground reconnaissance for the panzer divisions they were assigned to. Only in open terrain, when being followed or to protect a withdrawal is the company used together.” The Puma performed well in its traditional roll and even showed strength on the attack.

The Pumas first saw combat in Normandy with the Panzer Lehr division’s drive into the invasion zone on 8 June. A few days later on the night of 13 June Pumas of 2nd Panzer Division engaged elements of the US 26th infantry near Caumont which had inconclusive results. 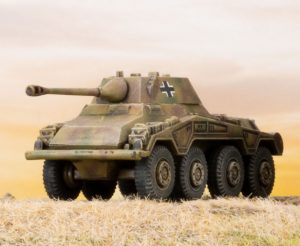 The Panzer division’s greatest enemy in Normandy proved to be the Allied fighter-bombers and the Pumas struggled with the foe as well. The stealth and infiltration techniques practiced by the Aufklärungs companies whose emphasis was on seeking cover during the day did help a high percentage of Pumas to survive the heavy damage the Panzer division took during Normandy. Of the original 26 Pumas from the Panzer Lehr division that started the campaign 8 survived Falaise Gap. In that same time only 20 tanks survived out of the starting strength of 109.