with Chad (Battlefront US) 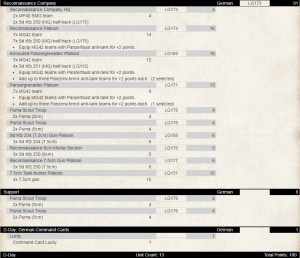 My favorite list from V3 was the Panzerspahkompany from Grey Wolf, so when D-Day: Germans hit my desk and I saw the Reconnaissance Company in the Forces list I rushed to page 59 and looked at what I knew I would be building. 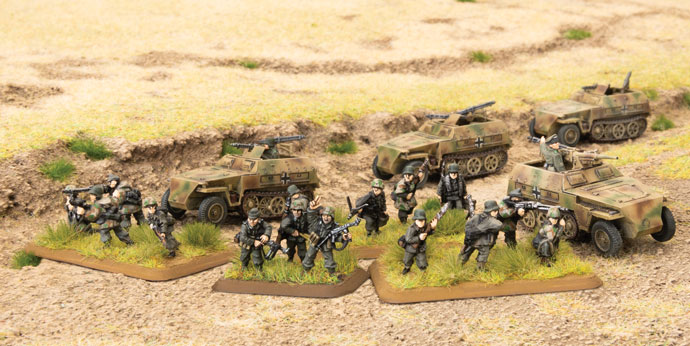 Being a Recon force for the Panzer divisions, mobility is a key element to this force, so I started with 2 platoons of Pumas with the 5cm and added a SD Kfz 234/3 (7.5 cm) Gun platoon for better Firepower, and HEAT bonus. Here is where the TANKS line of products also benefit a Flames Player as you can flesh out the extra vehicles needed with TANKS Pumas (TANKS27)…

Filling the Core requirements, I choose one Reconnaissance Platoon, and a full Armored PanzerGrenadier Platoon to get a couple of Panzerschreks in for assaulting tanks off objectives, or holding off an assaulting tank force. 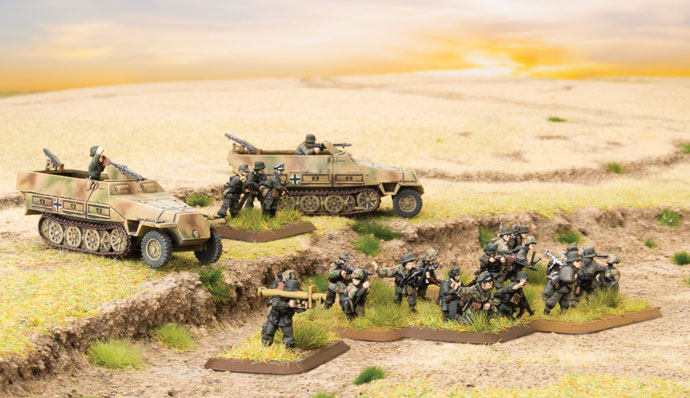 Then I filled out more core slots because this force is fragile, and can’t hold up to large losses. So, a Recon 8cm Mortar, and Armored 7.5 Gun Platoon were added in. Having a template weapon to help pin and a smoke bombardment for screening, yes please. Lastly the 7.5cm Pak 40 Tank Hunters help with board denial, and having higher than AT 9. These will probably hold an objective with the 3rd infantry platoon of Panzergrenadiers on foot.

I was really debating adding in an artillery, as Wespes, or the Command Card that allows swapping my Jagdpanzer IV with a Brummbar. While that is a more balanced option it didn’t feel like a fit with this mostly mobile force. Thus, I beefed up the infantry with Panzerfausts, and additional Panzerschrecks, and added 2 additional 5cm Puma platoons. Most of the force has scout/spearhead which means you can really open up deployment options to put things where you want.

This gives me a mobile force with plenty of AT when flanking shots can be had. The multiple pairs Vet Pumas serves as a shiny distraction (because they won’t survive long) but they tie up enemy fire long enough for the infantry to move up, punch a hole, and hold on long enough to secure the victory.

Not being your typical German force also allows you to paint something different. As such this force will get the less often seen ‘Octopus’ pattern rather than the typical 3 color ‘Ambush’ seen.

I chose 2nd Panzer partially for the Token set, partially because before I cracked the book my thoughts were Panthers, and partially because the Sd Kfz 250s won’t release til early October, I can simulate being refit in France, and not making the front lines until Operation Luttich. Now to get this force assembled, painted and head West to Normandy.