With the release of Oil War we at Battlefront are taking a trip back to the desert. In this book we seek to examine the first days of a major conflict between the two superpowers of the Cold War era spreading out to encompass Western Asia. As part of this enlarging of the conflict as we have envisioned it, we examine four armies, Israel, Iran, Iraq, and Syria.
The book sets down some organisational structures and basic philosophies of use that each of these armies employed based on their long or on-going experiences of fighting in this inhospitable environment. They determine everything from what equipment and tactics they use, to how they paint their military equipment. 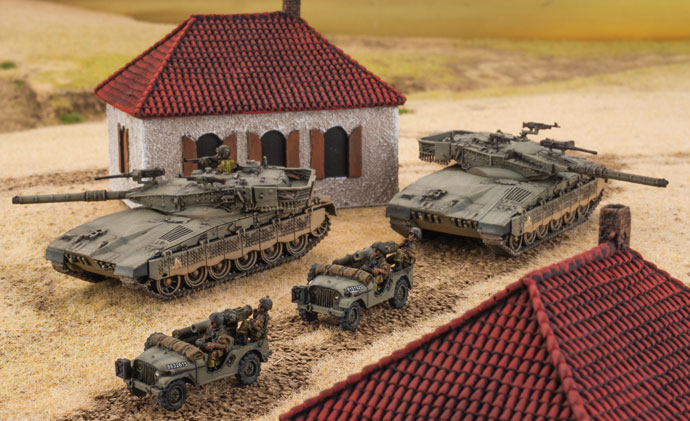 Twentieth century warfare is dominated by ranged combat, as such, the problem has three prongs. Spotting a target, identifying the target, and ensuring the target is within range of the weapon system/s at your disposal.
The battlefield of the 1980s is an interesting cross-section of emerging technologies that seek to make the three tasks above more simple, and older ideas and technologies that are more tried and tested.

Items like Thermal Imagers and Laser Rangefinders do indeed make the problems of spotting, identifying, and ranging potentially more simple, however at the time these pieces of technology were bulky, expensive, and difficult to maintain.

So while parts of an army might have access to some or all, the vast majority of troops still only have the Mk.1 eyeball, and this is where camouflage comes in.

So what is the basic purpose of camouflage?

Some of you already know, but some will not.

The answer is that camouflage, especially with regards to large pieces of equipment (for instance a Main Battle Tank), is used to fool the human brain into thinking that the object being viewed is not there, something else or at a different distance than it is. 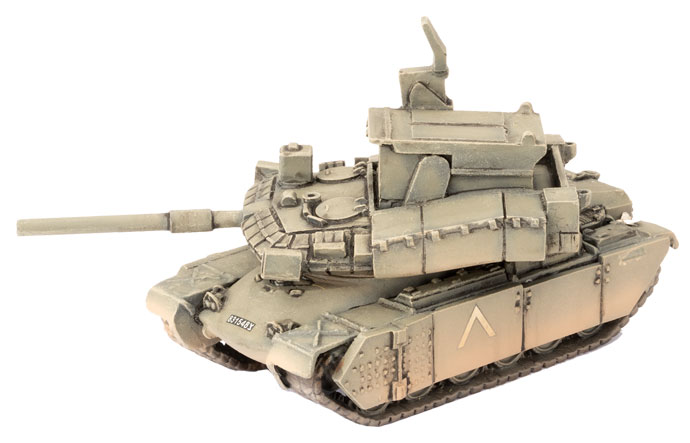 Some environments make this task more simple as the terrain comprises of a large number of obstacles that can be used to obscure the target in part, or in total.

These types of terrain features are not nearly as prevalent in a desert.
The terrain in desert environments is often marked by flat open areas providing little in the way of natural cover and concealment. Therefore the paint job on your Tank is fairly unlikely to fool anyone into thinking that it is a small hill or clump of trees as it might in Europe.

The only way that this is going to work in an arid desert environment is to bury the item in the sand, while this is a workable option for static defences it is not an ideal situation if mobile warfare is the name of the game.

The armies examined in Oil War approach the problem from two directions.
Israel and Iran choose to paint their ground based military equipment in a drab light green grey colour. The reason is that these armies are expecting to fight in varied terrain, from the desolate Negev desert to the more temperate Golan Heights and Southern Lebanon in the case of the IDF.
Therefore they have decided to go with a neutral colour that will not stick out in either type of environment when clean, and with local dust will do a good job of blending in, thus rendering the vehicle more difficult to detect.

This approach does a good job of concealing, therefore making the task of locating the target more of a challenge, however it does not address the problems of target identification and ranging to the same degree.

Iraq and Syria approach the issue by employing camouflage patterns.
These are more terrain specific and more time consuming to apply, but do break up the shape of the piece of equipment more effectively, therefore making accurate target identification and ranging more difficult, at the expense of being able to be used in multiple environments without being changed.

Other armies briefly mentioned in the book generally approach the problem in much the same way.

So for instance, the US forces for the most part were deploying for Exercise BRIGHTSTAR in Egypt, therefore would for the most part be using the Grey Desert version of MERDC, which consists of a sand coloured base, overpainted with field drab, earth yellow and black.

Whereas the Soviet forces are depicted as using their ubiquitous drab green.
However, this does not Have to be the case. Team Yankee takes place in an alternate reality, so you could paint your Soviet models in the green and beige camouflage pattern used by them during their military involvement in Afghanistan during the 1980s, equally US forces could be using the all over light sand colour as seen during the 1991 Gulf War, as could your Iraqi forces.

If you do choose to paint your forces in camouflage, it is a good idea to see if an existing template exists. If so, use that if historical accuracy is your jam.

This also generally means that the hard work of figuring out colour placement and shape, in order to best break up the shape of the piece of equipment, has already been done.

However, in the case of camouflage schemes that have been applied without a template (for instance Iraq or Syria), a good way to approach the situation, is to either find historical photographs to help give you a general look and feel, applying basic camouflage principles (for instance ensuring that no surface is entirely one colour) or a combination of both. In this way you will be able to ensure a more lifelike appearance to your miniatures.