Shortly after I joined the Battlefront team back in 2009, fellow Graphic Designer Casey was finishing off his Das Reich T-34s. I thought they were really interesting and I put it on a mental list of armies I would like to build one day. With the release of Ghost Panzers, and the command cards, now is the time.

As with most of my projects, the first step is research. Between quizzing colleagues, scanning books, and of course, Google, I collected all the images and info I could to see what conversions I’d need to do. J.C Von Winterbach’s article was also a good source…

I’m lucky to have access to spare sprues, but lots of the conversions can be done with spare parts you may already have if you’ve built other German tanks. For example, the Panzer III kit comes with both open and closed cupolas, so you’ll have spares of those. You may have also built some Panzer IIIs without the turret stowage bin, or Panthers without the side skirts, so you’ll have those to use for captured T-34s.

Next I made my V4 Flames Of War list using Ghost Panzers and the command cards. 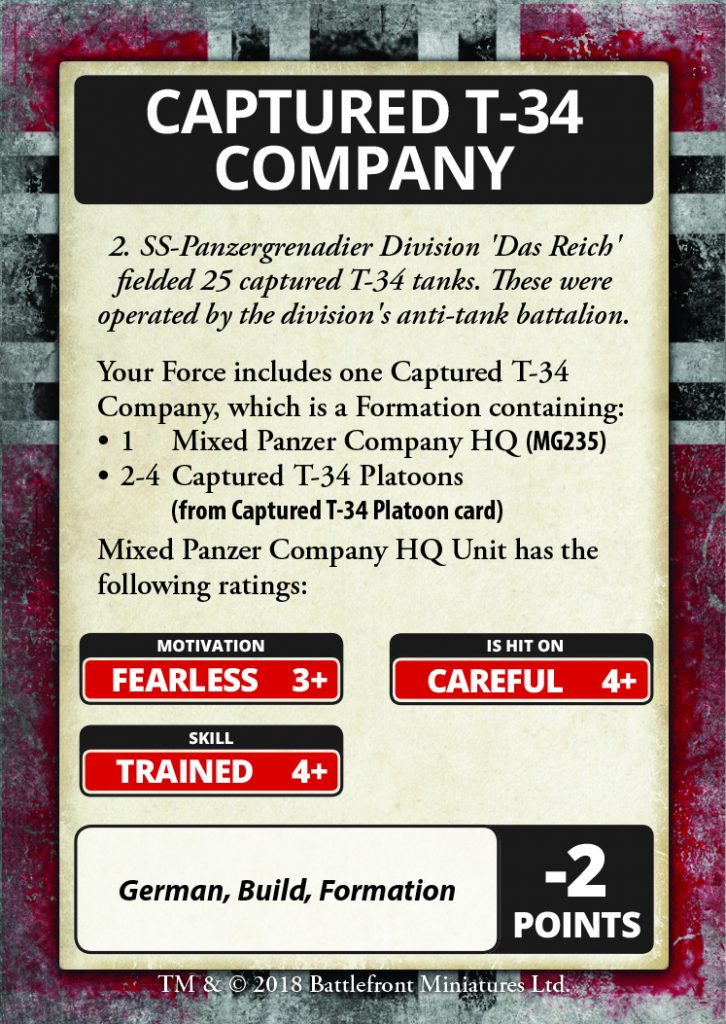 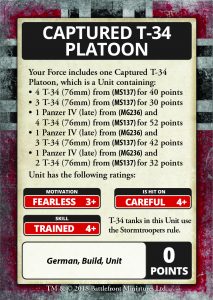 Stowage Bins
From looking at photos it seemed quite common for the Germans to add extra stowage bins in various places on the T-34s.

The rear turret stowage bins from the Panzer IIIs fits quite easily onto the back of the T-34 turrets.

To create the angled bins on the sides, I used a section of Panther side skirt, glued it at an angle, and the filled the side with sculpting putty.

The Germans often upgraded their T-34s with Cupolas from Panzer IIIs. Simply remove the locator pin from the bottom of the cupola and glue in place.

Extra Armour
Less common than some of the other modifications, but too cool to not include, was extra armour around the turret and side skirts.

The side skirts from the Panther kit glue nicely to the sides of the T-34 hull. You’ll just need to remove one section to make them the correct length.

For the turret armour I chose to use the late Panzer IV kit, but in the photos it looks to be custom made.
Aerials and Notek Lights

These were carefully sliced off the Panzer III kit and applied to each T-34. For the Notek lights I used some thin plasticard rod to create the stalk.

The Panzer III and IV kits come with spare cans which are great for any German AFV. I made holding brackets by cutting plasticard into strips about 1mm wide using a sharp blade and a steel rule. I then cut them down to the appropriate length and bent the ends with tweezers, before glueing them on with plastic glue.

When using captured equipment there’s always the increased risk of friendly fire, especially from aircraft, so crews often used flags for easy identification.
I made my flags by cutting tin foil into rectangles, and then pressing them onto the tanks. I used superglue to fix them. The good thing about using tin foil is that it hold its shape and doesn’t spring back like paper can.

The finishing touch was to add some metal stowage from the special order range to make it look like the Germans had really made these tanks their own, and of course some German tank commanders.

With the core of the force built all that’s missing is my HQ tank and supporting Tiger which I’ll work on later.
Hopefully this has inspired you to work on some captured T-34s of your own. Remember you don’t have to use all of the conversion ideas here. You can get a convincing captured look with just paint and decals. Here’s an example using just German crosses, and also one of Casey’s with 3 colour camo.