All four of the mid-war Eastern Front books were designed together. There was a lot of crossover between units in both books, so we wanted to make that cross support possible between books. For instance, in the German case, we wanted to make sure that you can take your Grenadier infantry forces from Iron Cross and back them up with Ferdinand and Brummbär heavy tanks from Ghost Panzers, just like what happened in Model’s 9th Army attack on the northern front of the operation. Of course the reverse is also true. You can field a Ghost Panzer formation with Iron Cross support, such as an Armoured Panzergrenadier Formation with your early panzers and StuGs to represent the half-track mounted troops involved in the 1942 summer offensive.

Let’s take my Grenadier company from Iron Cross as an example. Here’s the 100pt Grenadier Company I’ve been using: 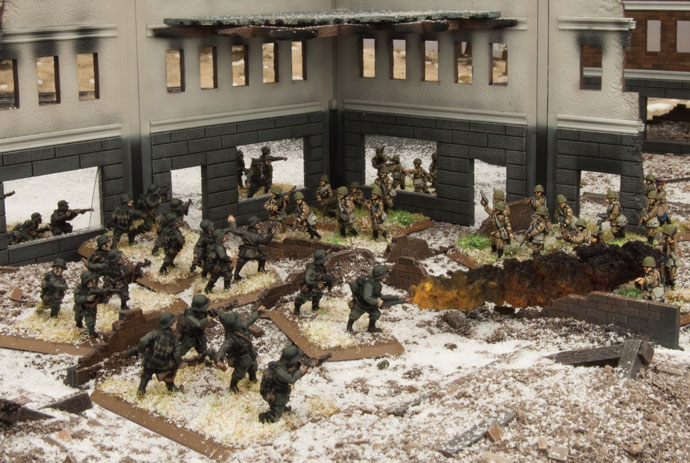 I originally modelled this force as an assault unit involved in the 1942 summer blitzkrieg attacks. It’s got some defensive power, but has an offensive footing with flame-throwers, submachine-guns, and Stukas.

I’m excited about the upcoming release of the Ferdinand, so I’m going to convert this force into a Citadel-themed one so that I can include them. However, I also want to retain as much of the tactical flexibility from Iron Cross as possible, such as artillery. I can achieve this by using my Iron Cross Formations with Ghost Panzer support units. I have to choose which book to draw support from, I can’t do both, so I need to drop my StuG assault guns because these early versions are not available as a Ghost Panzer support unit. On the other hand, my artillery and Stukas are both available in Ghost Panzers, which means I can bring them across.

Dropping the StuGs earns me back 27 points which goes a long way towards getting me a pair of Ferdinands. However, I still need to find another 7 points, which I can get from reducing my Grenadier platoons to 7 teams each and taking out an HMG somewhere. So in the end, my 99pt Citadel Grenadiers will look like this:

So with just a few small modifications to my army I can field my tried and true Grenadier force in Operation Citadel battles using a pair of mighty Ferdinands.