With several new artillery weapons being released I thought I would look at all the options available to me that I might have previously not even looked at plus the new stuff.  To my surprise when I tallied up the number of units able to deliver an artillery or salvo template, it was at least twice to three times what I imagined!  If you consider what is available in several formations, support and command cards, the total number of different indirect weapon systems totals nineteen!  That is right, nineteen!  Here is the list of them:

Starting out with the formation weapons we look first at the mortars.  These tend to be the cheapest artillery assets and can be taken by several infantry and recon formations (with the armoured mortars in the tank formations).  As well as being cheaper, they also count towards keeping the formation from breaking.

First up is the 60mm mortar which is either intrinsic to the Infantry Platoon or an option for the dedicated mortar platoons.  It has a range of 32” AT1 FP4+.  In the infantry or recon platoons where they appear, it’s a great little option to field multiple templates which can support assaults or to pin your enemy – with one weapon in the battery. Next is the humble 81mm mortar which has a range of 40” AT1 and FP4+.  It can also fire a smoke bombardment and useful to defend objectives if required.  In the Battle-Weary Mortar Platoon, you can take two for 2pts, four for 4pts or six for 7pts (no brainer to take six for rerolling misses). Alternatively, you can three 60mm mortars instead for 2pts.  In the Bastogne Parachute 81mm Mortar Platoon you can either two for 4pts or four for 8pts.  The Bastogne Glider 81mm Mortar Platoon you can take either three for 5pts or six for 10pts.

The armoured versions of this mortar are mounted in the M3 Half Tracks in Tank and Armoured Rifle formations.  Three in a unit and are 3pts in Veteran Tank Formations or 2pts other Formations.  The advantage they have are that they are armoured and can keep up with tanks and easier to escape counterbattery fire. 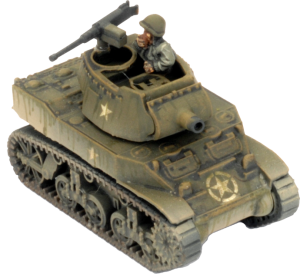 The Paras get their own 75mm pack howitzer that has a range of 64” AT FP4+ and smoke bombardment.  Direct fire capability of 20” AT6 FP3+.  You can take two for 6pts or four for 12pts.  Both the Paras and Glider Infantry have this in their formation.

Next up is the 105mm Light Howitzer that has a range of 56” AT3 FP3+ and smoke bombardment.  Direct fire is a useful 20” AT7 FP2+.  In the Bastogne Glider 105mm Artillery Battery, you can take three for 11pts or six for 22pts.  The Battle Weary 105mm Cannon Platoon is two for 4pts, four for 9pts or six for 13pts.  If taking the Gliders, I would take three as part of my formation, if rifle company then take the six for rerolling misses for the points for the formation.

The last formation unit to cover off is the M4 Sherman (Calliope) Rocket Launcher.  These are found in various tank formations and provides an in-formation rocket launcher.  Range of 48” firing a salvo with AT2 FP5+.  With the 5+ fire power, you will be looking to pin units rather than removing them but useful over a large are and for counterbattery fire.  Take three for 8pts, four for 11pts, five for 13pts.  You get three of these in the new starter box or you can buy the add on launchers as packs of three separately to put on your Shermans.  There is also a command card that allows you to put these on early model Shermans instead of the new M4A3 series.

Moving onto the support options now we look at the guns first starting with the workhorse of the artillery – 105mm howitzers.  Again, you have the choice of the towed version or self-propelled (Priest).  Range is 72” with AT3 and FP3+ with a smoke bombardment.  Direct fire out to 24” AT9 FP2+ with Brutal and Smoke.  Towed is two for 5pts and four for 10pts.  Self-propelled is three for 8pts and six for 16pts.

The new kid on the block for this release is the T27 Xylophone Rocket Launcher.  This is your counterbattery rocket launcher battery.  Able to lay down a devastating salvo barrage and then move to take up alternative positions being mounted on trucks.  Stats are 48” range and AT2 FP5+.  You will want to keep these out of sight and use observers for them.  Two for 3pts and four for 7pts.

The final support option is the P-47 Thunderbolt Fighter Flight.  You can fly anywhere on the board and drop bombs on your opponent and with a template with AT3 and FP2+ against infantry and gun teams or fire rockets with AT5 FP4+ for taking on tanks if you need to.  The AT5 can even threaten heavy tanks such as the Tiger and IS-2s top armour.  A flight of two costs 9pts.  Even though you only have two planes, you are not penalised with having to reroll hits. 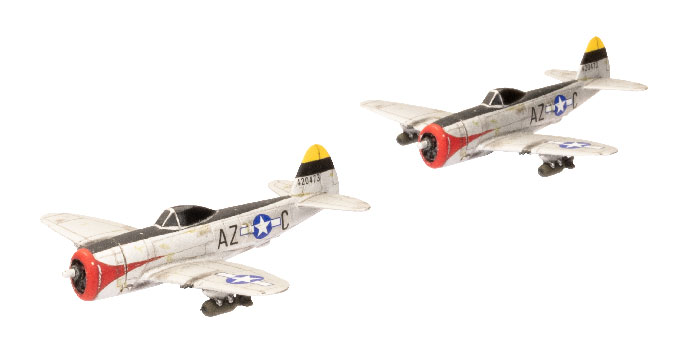 In this release there are also four command card upgrades if you want to take something a bit different for your artillery.  First up is the 10.5cm Provisional Field Artillery card.  This card allows you to replace a 105mm Field Artillery Battery with captured German 10.5cm howitzers keeping the “Time on Target” rule and all other stats.  They are Confident Aggressive Veteran and as large guns assault on 5+.  Two guns are 5pts or four guns are 10pts.

Second is the 8.8 Provisional Field Artillery card which represents the captured 8.8cm AA guns to replace 105mm howitzers.  They have a range of 88” with AT2 FP4+ and useful direct fire stats of 40” range AT12 FP3+.  It has gun shield and slow firing rules.  No tactical move but terrain dash of 2” cross country and road dash of 4” with a cross check of 6.  You won’t be moving them very far without transports!  Two for 5pts or four for 10pts.

Third card is again for replacing 105mm howitzers and represent captured Pak 43 AT guns.  Same stats as the 8.8cm AA guns except they are AT13 instead of AT12 – everything else is the same.

The last command card option is the 4.2-inch Chemical Mortars.  You can take this unit if you have the option of fielding a Battle-Weary Mortar Platoon in your formation.  It has a range of 48 with AT2 FP3+.   Its four for 6pts and allows you to take another cheap mortar option.

A quick mention about “Time on Target” rule.  Several artillery units have this rule.  What it allows is that if a unit ranges in on the first attempt, all infantry and gun teams hit by the bombardment must reroll successful saves.  Basically, a free repeat bombardment on your first attempt.  The units that have this rule are:

The last thing I want to cover off is using an observer.  You have a choice of a M4 Sherman (Late) OP for 3pts or L4 Grasshopper OP for 2pt.  The M4 Sherman (Late) OP is armoured and can be used as a tank firing AT10 and MG’s as well.  The L4 Grasshopper is a plane and can be anywhere on the board to spot – that is very useful on terrain heavy tables.  Now you can only take an observer if you take one of the following artillery support units:

If you take one of the command cards options that replaces one of the above, eg the Provisional Artillery Batteries, that also applies.  Once you have an observer in your force, it can spot for any artillery unit including any formation units except for the P-47 Thunderbolt Fighter Flight which must self-observe.  Another note is that a lot of American recon and infantry units have the Observer attribute so they can also be an observer, so depending on your force composition, you may not even need to take a specialist.

In summary, the Americans get a lot of artillery options to choose from with this release.  Choose the best unit that suits your requirements and cost to fit into your force and enjoy list building!