I play what some might call ‘a lot’ of different games. I won’t bother listing them, or putting a number out there. Not only just because I’m incapable of doing either off the top of my head, but because it’s simple enough to describe it as ‘likely way too darn many’. With that said, Flames of War has been my favourite ever since I discovered it more than a decade ago. While I enjoy the look of the game, and the mechanics of the game itself, I’m pretty confident that the thing that keeps me coming back is the history. That is to say, while I’ve definitely got time for super heroes, mutants, gribbly space monsters, knights, wizards, goblins, and the rest, nothing interests me more than modelling and gaming through the amazing stories that revolve around the second world war. While my love of this game and the hobby has lead me to collect a rather wide assortment of forces, my absolute favorite has always been my 101st Airborne Rifle Company. When it comes to histories, few are as well-known or as widely told as that of the 101st. This is likely a function of the efforts of Mr. Stephen Ambrose, the author of ‘Band of Brothers’. As a general rule, despite my owning the series on disc, if and when I come across ‘Band of Brothers’ on the television, that’s pretty much the end of the day. I’ll gather my hobby supplies, the tv tray, and a project to work on and happily spend the day puttering about listening to the story and building a model or two. This army was a standard for me in the past, and I’m very excited to see it come back to the game with the release of the American Bulge book. I intend to take a broad overview look at the Para list in the Bulge book, what has changed between previous V4 airborne options, and the old V3 Nuts book. We’ll also take a stab at the core of a list, and discuss modelling options. 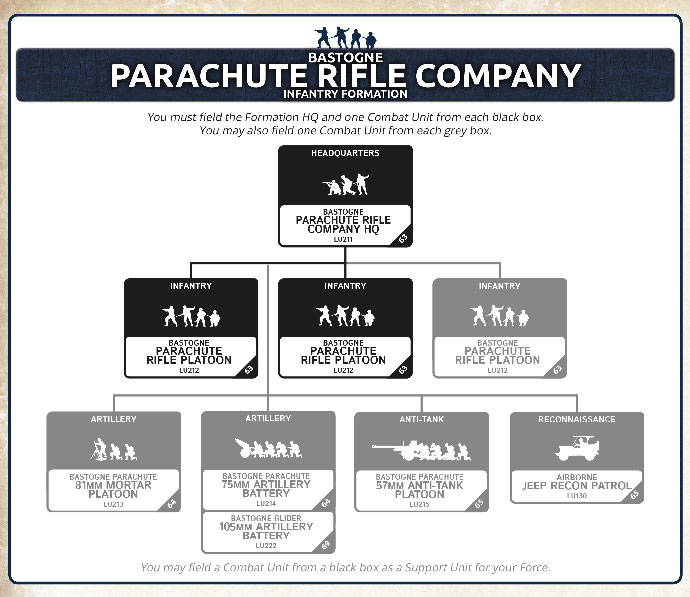 The Bastogne Parachute Rifle Company is possibly the most elite infantry force presently available in Flames of War, but what does that mean in game terms? These guys are rated as Careful Fearless Veterans, with a 2+ last stand. They bring a mortar and a bazooka as standard, and have options to add a second bazooka, and up to a pair of M1919 LMG’s. While this certainly means that a platoon of U.S. Paratroopers is better equipped, prepared, and able to get most jobs done than their counterparts from other forces, it also means those are ratings and tools that you’ll be paying points for. Like most elite forces, you’ll not have as many stands as you might like, making each decision and roll of the dice that much more important. How many points are we talking about?  18 Points for a fully kitted out platoon, and 12 for the minimum. While that’s only a single point increase over the previous American Paratrooper entry in the D-Day American book, it’s a fairly hefty price tag. Let’s take a look at what you get for the price. 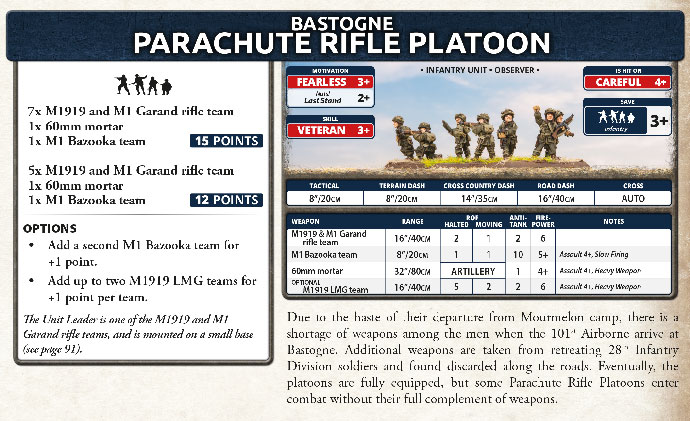 When comparing the newer Bulge option to it’s predecessor from the D-Day book we’ve only got a handful of differences to consider:

NUTS
The ‘Nuts’ rule puts just how stubborn and tenacious these paratroopers are meant to be on display, and it’s nice to know that you’re only losing a platoon in bad spirits on the roll of a 1. Unfortunately, the value of a rule that protects a platoon from failing it’s Last Stand roll is a direct function of the value of the platoon in question. If we’re rolling Last Stand, then at most, that platoon only has 2 stands left. Now admittedly, this could be because we’re a might out of position with some teams, but chances are this platoon is on it’s last legs. It could be the case that passing this Last Stand buys you another turn in some clutch situation in a game, but the point remains, in the vast majority of situations ‘Nuts’ is likely too little too late. Further, it’s potentially made a little redundant with the addition of a command card. In short, it’s definitely a bonus, but not one I’m personally excited about paying for in what is already an expensive list.

105MM Artillery Battery
While this is a difference between the Bulge and D-Day versions of the formation, it likely won’t make much of a difference for most players. Unless you’re specifically looking to keep everything organic to your formation for historical reasons, the Glider option isn’t giving us much. The full 6 gun battery is likely far too expensive for our formation, and the 3 gun option costs more than a 4 gun Field Artillery Battery taken as support. Both likely pale in comparison to the 8.8cm Provisional Field Artillery made available via command cards.

57mm Anti-Tank Platoon
Where we previously had only a 4 and 2 gun option, we’ve now got a 4, 3, and 2 option. The 4 gun option has us paying a 1 point tax for our ‘Nuts!’ rule relative to the D-Day offering. The 2 gun option is priced identically to its predecessor. I didn’t use an Anti-Tank platoon with my V3 Paratrooper list from Nuts, as the Rifle platoons could have as many as 4 bazookas each. However, with that limited to 2 stands per platoon now, and the changes to hit allocation, these will likely be much more important. I’ve got a set waiting to be built in fact. The addition of ‘Nuts!’ on this platoon is potentially a big deal, as having that last gun stick around could be very important.

Bulge Support Options
Now this is where things change up for our Paratroopers, and why I intend to pick up the Bulge book first thing. Combined arms is the best way to play this game in my personal opinion. If you’re playing a formation of paratroopers, you’ll likely be looking for something to pull some teeth out of armoured targets at range, and you’d be hard-pressed to find a better option than the new US Armor options, including the Easy 8, and Jumbo in this book. This is also a super easy way to add some history to your list. Nothing says ‘Bastogne’ better than a company of beleaguered paratroopers dug in like ticks, holding on against all odds, and the timely arrival of the 4th Armored.

We’ve got all sorts of options to consider here when it comes to throwing a little more punch, and historical flavour into our paratrooper list.

So, with all of that said, my initial thoughts are that we likely won’t be seeing much of the Bastogne Parachute Rifle Company in the competitive tournament scene. Yes, these are the best infantry out there, but they are still infantry, and so long as they’re relegated to simply holding ground, they’ll likely lose out to other similarly effective but cheaper formation options like some of the Battle Weary entries in the Bulge book. Thankfully, my interest in the hobby predominantly revolves around the modelling, an appreciation for the history, and the social aspect of gaming with a club. I’m very excited about breaking my Bastogne themed Paratroopers back out, and seeing just how much ground we can take and hold. We’ve already established that it’d be a might silly to pay this sort of premium for a static infantry formation to just sit on objectives. So I’m hoping to put together a sort of all comers list, and play a might aggressively to get the most value out of these Fearless Vets. I’m going to have tons of fun doing it too, trusting my dice rolls to keep those 3+’s coming to keep these fellas on the board. My first run at this list at 110 points looks something like this. 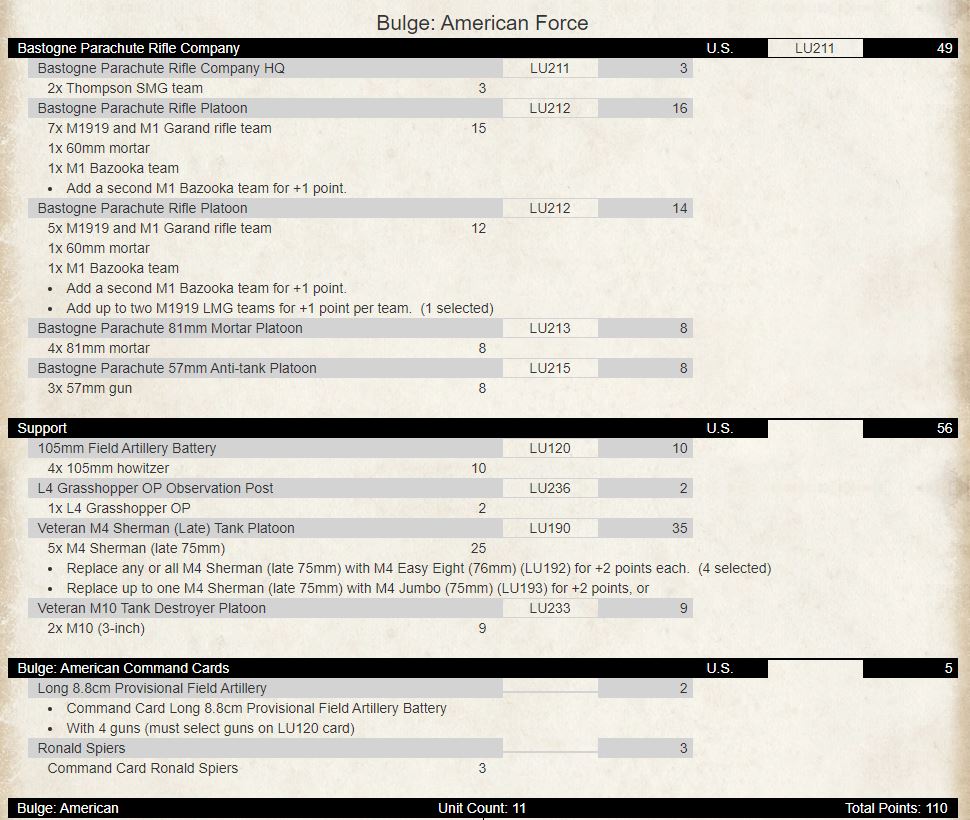 I’ll likely end up dropping either the AOP or the Speirs command card to bump the 88’s up to the Long variant. This list is built to 110 points to match the Late War points values for 2022. The two armour platoons come out to 44 points, making them ideal reserve options. We’ve got a solid formation of 6 units. The hope is to be able to identify and take advantage of games in which I’ve got a position of authority early to claim a larger portion of the board with some aggressive play, and some judicious use of my artillery. In games in which I don’t have such an advantage, we’ll dig in, and attempt to counter punch.

Modelling
My favourite thing about my paratrooper force, is the look of my paratrooper force. We’ve got a fair bit to play with options wise here. Supplies, including winter gear, were in short order as American forces were rushed in to stem the German offensive. I’ve chosen to model this by basing my Paratroopers in a winter theme on Battlefront’s rural base set, and by mixing winter geared riflemen, and regular paratrooper models. My opinion is likely biased, but I believe this makes for a very interesting, and striking looking force.

I’m excited about playing this force again, and if you’ve an interest in this particular piece of history, I’ll bet you do to.