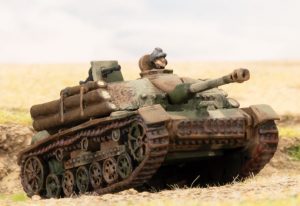 With the launch of the Bagration: Axis Allies release, I thought I would look at how a new player, or someone on a budget, can get a Finnish force on the table that would be semi-competitive or at least hold its own with the focus on the Sturmi Assault Gun Formation.  For the new player, it opens the door to playing Flames of War without needing to buy, assemble or paint too much and get into playing the game quicker.

There is no starter box for the Finns, so we need to build it up based on standard boxes.  We will need two Stug boxes as the core of the force.

OK – let us have a look at the formation and see how what we need for our force: 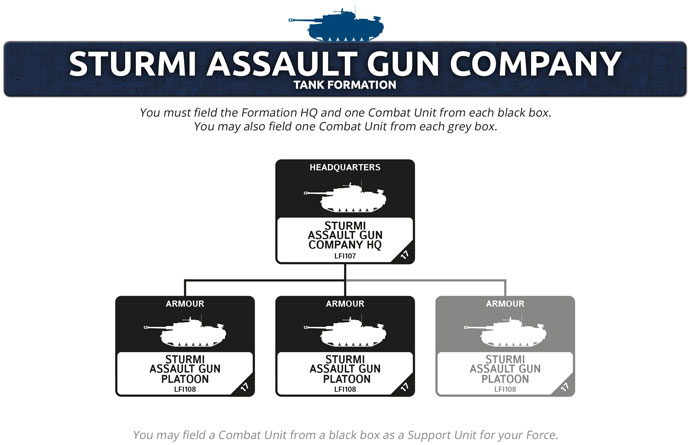 That is, it – nothing else in the formation.  You can take seven to eleven Stugs.  We will need some support for them and that will include some infantry artillery etc.  We can also look at allied German units such as Tigers.  What attracted me to this formation is the rule of cool.  You can get add on Armour packs for the plastic Stug sprue to turn it into a Sturmi and give them a distinctive look.  Looking at the stats for the Sturmi, you can see they are Fearless Careful Veteran with the ability to assault on 4+, counterattack on 4+ and remounting on 2+!  OK let us have a look at a couple of lists based on 105pts: 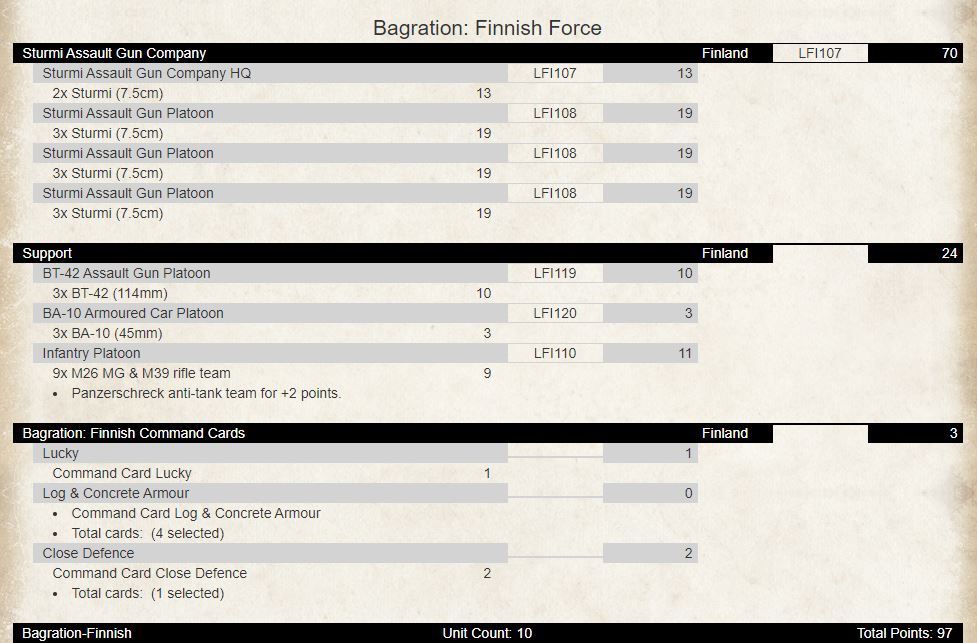 A maxed-out formation with some infantry support and some more flavour with the captured soviet equipment in the support slots.   The armoured cars provide spearhead and can protect the flank against light armour and enemy armoured cars.  The BT-42s provide a template and are armoured and mobile so can move if there is counterbattery fire.  The Log and Concrete Armour Command Card provides some protection against FP5+/6 weapons if it fails its armour save.  Roll a 5+ to stop the shot cold.

To buy this army you need only to purchase the following for $311:

Next, we look at providing some high end AT14 which we can only get from allied German tank units such as the Tiger, Panther and Panzer IV/70.

OK so we now have some AT14 in the list and still have infantry and artillery and our core is still maxed out.  To buy this army you need only to purchase the following for $300:

Now we could shake it up a bit and drop the infantry, change the artillery, and replace the Tigers to get more bang for our buck of taking three Panzer IV/70s and keep the theme of assault guns.  How would this look: To buy this army you need only to purchase the following for $293:

The Finns have a great tank formation to take as a core force with a plethora of allied German support or formations.  If you are a German player, consider taking a platoon or formation of Sturmi as allied support – give you an extra boost with the best Stug in the game.

Having German Allies provides future proofed support options for the Finns as the release timeline progresses.  With Kingtigers, Jagdpanthers and Jagdtigers still to come, you will be able to provide AT17 support for your Finnish force!

If you were considering starting a Finnish force or just a formation, I hope this gives you some food for thought.