With the launch of the WWIII: West German, I thought I would look at how a new player or someone on a budget could get a competitive force on the table with new equipment such as the Leopard 2A5, Marder 2, Wiesel, and JagdpanzerKanone.  For a new player, it opens the door to playing WWIII without needing to buy, assemble or paint too much and get into playing the game quicker. So, if we look at what we get in the starter set, that might help us decide what formations to run.

The starter set contains the following: 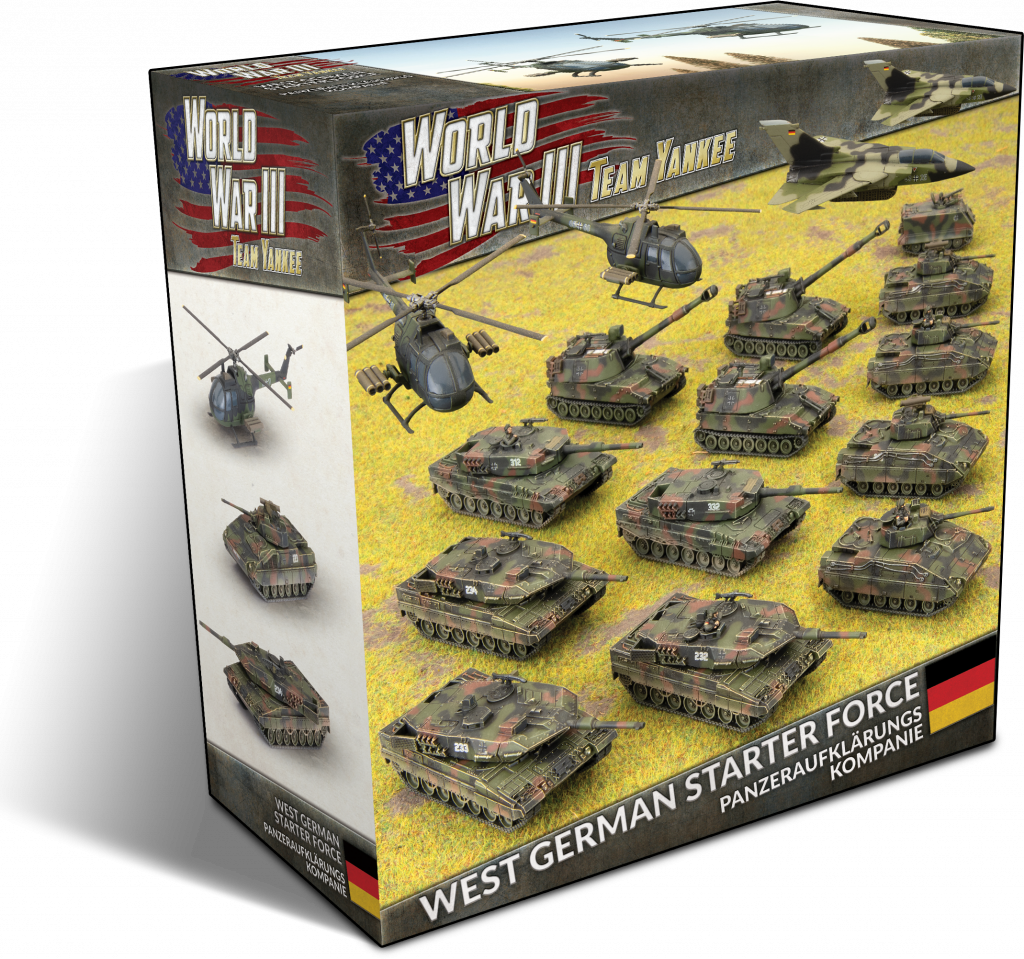 Because the rulebook is included in the box you’re already saving some money. One very cool thing about this starter box – is it includes an OP.  Now if we look at what formations are in the WWIII: West German book we should be able to figure out how to use what comes in this starter force. The best formations straight out of the box are the Leopard 2 Panzer Aufklarungs Kompanie, Leopard 2A5 Panzer Kompanie, and the Marder 2 Panzergrenadier Kompanie.

We are going to look at the Leopard 2 Panzer Aufklarungs Kompanie formation first:

Straight out of the box we can use all the Leopards and Marders as part of this formation and apply the rest of the box as support.  Looking at 105pts, this is what we could build using this starter force and an extra box:

We have used everything in the box and added a box of two Tornados.  Now this formation has five units for the break – and all small units at that. Bearing in mind that whilst small, they can be used with great skill and frustrate opponents. The Marder 2s have been upgraded to 50mm for 1pt this means the unit has AT13 instead of AT11, which is worth it.  Note, that the sprue contains both barrels but only one turret, so you could magnetize the barrels to interchange them or just glue in the one you prefer.

To buy this army you need only to purchase the following for $170:

We can change up this formation by adding a few extra models and not using everything in the starter force to give you some more options and make the formation a bit more resilient.  An example force could look like this:

Now this formation has only five units to break before it has to roll formation morale – and all small units at that. Keep in mind that whilst small, they have a high skill cap and are very capable of frustrating opponents. With a three-tank unit of Leopard 2A5s and a unit of six Gepards, you now have two units that should be more robust and output a lot more firepower.  Note, to achieve this, we had to downgrade the Marder 2s to a 35mm gun.

To buy this army you need only to purchase the following for $301:

You could also drop two Gepards and add in an infantry platoon – either in formation Fuchs Panzer-Aufklarungs Zug for 4pts (and upgrade one Marder 2 Spah Trupp to 50mm for 1pt) or take an Fallschirmjäger Zug for 5pts.  Whilst the Fuchs infantry is in-formation, it is small with four stands and the Fallschirmjäger has six stands which would hang around longer but being support, does not count towards the formation break.

The next formation we can look at is the Leopard 2A5 Panzer Kompanie.  This formation is made up of the following units:

From our starter box we can go two ways to filling out the formation, depending on your preference – Leopard 2s or Marder 2 Infantry in the second compulsory unit.  the good news is that the M109s are now part of the formation and you can choose the short or long barrel option.  An example force with Leopard 2s:

As you can see, using everything except the PAHs and 2 Marder 2s.  The formation break is 5 units and with the M109s in formation we can still use a troop of Marder 2 Spah as support.

To buy this army you need only to purchase the following for $251:

If we took the Marder 2 infantry instead of Leopard 2s in the formation, this is how it could look:

We are using everything except for two Leopard 2s and one Marder 2.  Adding the usual Gepard Flakpanzer Batterie and additional PAHs and Tornados.

To buy this army you need only to purchase the following for $272:

Looking at the Marder 2 Panzergrenadier Kompanie now, this formation is made up of the following units:

Straight out of the box we can use most of the kit except for the Leopard 2s (unless we add them as Formation Support black box choice):

We use everything in the box except for the two Leopard 2s.  It’s versatile and provides six units for the formation break.  M109A3Gs are part of the formation.  I have added Jaguars to provide some long-range AT23 goodness.

To buy this army you need only to purchase the following for $279:

If you wanted a second infantry platoon in formation, then remove the PAHs and Jaguars and add a second Marder 2 Panzergrenadier Zug and an M113 Panzermorser Batterie:

This now gives you seven units for the formation break and gives the option to attack and defend and now has two templates.

To buy this army you need only to purchase the following for $330:

You could swap out the M113 Panzermorser Batterie and replace it with a Formation Support Marder 2 Spah Trupp thus maximizing your Marder 2 purchase. You could use the starter box to expand on the formations above, however, I am interested in the new formations the book has to offer and I wanted to see how the starter box is applicable to them as well.  I believe this is a great starting point to add the Black Box Formation Support.  For example, the new Fallschirmjager Kompanie with the Wiesels!  This formation is comprised of:

It has no inherent tank, reconnaissance, or artillery support, but if we add the starter force it gives you all three.  An example force could look like this:

You want to take all three infantry platoons and max out on Wiesel’s for the formation break of six units.  Add Leopard 2A5s and Marder 2s as formation support with the artillery, AA, and the Tornados will round out the force to give it some balance.  If you want one or two of your platoons to have the option of Huey’s to provide some mobility on the battlefield, then you could drop some of the Roland’s to achieve it.

To buy this army you need only to purchase the following for $376:

The same approach can be taken to apply to the other new formations including the Gebirsjager Kompanie and the Heimatschutzbrigade Jager Kompanie.  I have existing formations already but I wanted to add some new models to them with the starter force in mind.

As you can see, the starter set is very useful as starting block to build your army. It provides lots of different options based on what sort of list you want to run, whether you are on a budget, or if you want to flesh out the last part of your list.  I will be getting one of these boxes to start my West German journey (yes yet another army) and I will be looking to create a Marder 2 Panzergrenadier Formation as my first stop!