For those who have read any of my previous articles, you will know that I have an affinity for reconnaissance formations.  I had written the article for the  Waffen-SS Half-Track SS Scout Company and the D-Day: German variant.  To round it out I thought I would look at the Bagration; German variant of the list, examine the differences, and see what new support options we can take now with this formation. 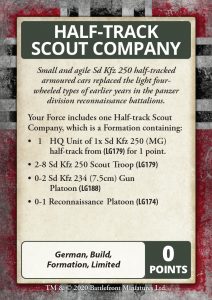 This is identical to the D-Day variant in terms of the number of units.  The Waffen-SS variant is different, in that it has only one Sd Kfz 234 (7.5cm) Gun Platoon. Looking at the makeup of this formation, we can take three to twelve platoons making it a strong formation if you wish, with built infantry and useful AT9 FP 3+ guns to support your half-tracks.  Being Heer, they are also rated as “Careful” meaning hit on 4+, best armour you can get!  Add in your scout platoon’s scout ability, which means they will be hit on 6s at close range if you are concealed and did not shoot whilst still moving into position!  Now the scout troops have three vehicles in the platoon, lightly armed with a 2cm gun and MGs but useful to get a strong formation on the table, allowing us to look at taking some of the cool new toys in this release.

After exploring the core formation below, we will look at options for 105pt, 80pt, and 55pt lists.

I do not normally max out all the platoons – I feel that taking 4-6 Scout Troops, 1-2 Gun Platoons and the Reconnaissance Platoon is enough to keep the formation from breaking thus freeing up more points on the new kit.  Looking below we spend 35pts on getting this core formation solid. 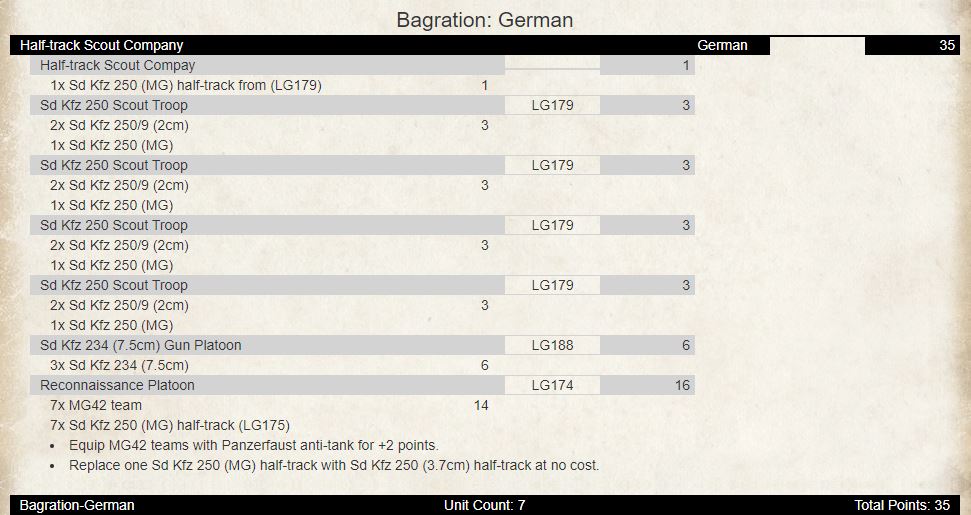 This is a core 35pts for the 105pt and 80pt lists. Looking at the 105pt list first, we now need to look at what support options could be taken.  With the ability to choose from Bagration: German, D-Day: Waffen-SS, or D-Day: German black box units, you can mix and match what you want to suit your playstyle.  Support options need to be taken from the Bagration: German chart.  For this article, I will be looking at taking some of the new equipment for this release.

So, let us look at what we need to consider from a support perspective for this list.  They should be supported by tanks, high-end AT, artillery, and what we need to cater for around reserves.  With 70pts left to play with, I want to build a mobile reserve unit that can come in and shoot at an opponent at maximum range and have the armour to withstand any return fire.  This means either the Panzer IV/70 or Elephant.  I think for this list we should take the Elephant.  FA16 with AT17 gun with 48” range fits the bill.  Three of these costs 43 pts.  Can also assault if required on 4s.  You can put these in reserve by themselves.  I want to take some Flak 88s with Pak Front for 18pts to provide some heavy AT capability across the table if my Elephants are in reserve.  Some Nebelwerfers for 9pts to provide some suppression indirect fire.  A sample list could look like this: 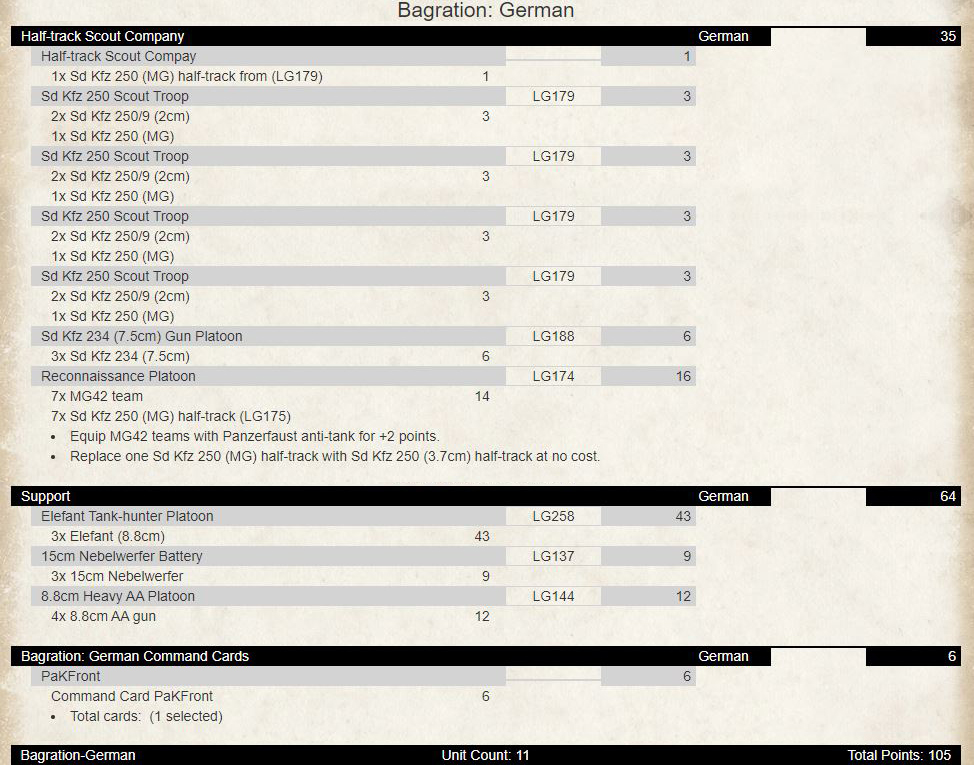 I like this type of force and suits my play style.  Lots of small units running around with four AT14 guns in nests spread across the table supported by infantry that can either attack or defend with tank hunters, that can come in from reserve or dominate the table and nebs to keep infantry pinned down in their foxholes.  Another option would be to change out the Elephants with four Panzer IV/70 Tanks – AT14 and FA9 and change out the nebs for the new Panzerwerfer 42 Armoured Rocket Launchers.  This is how it could look: 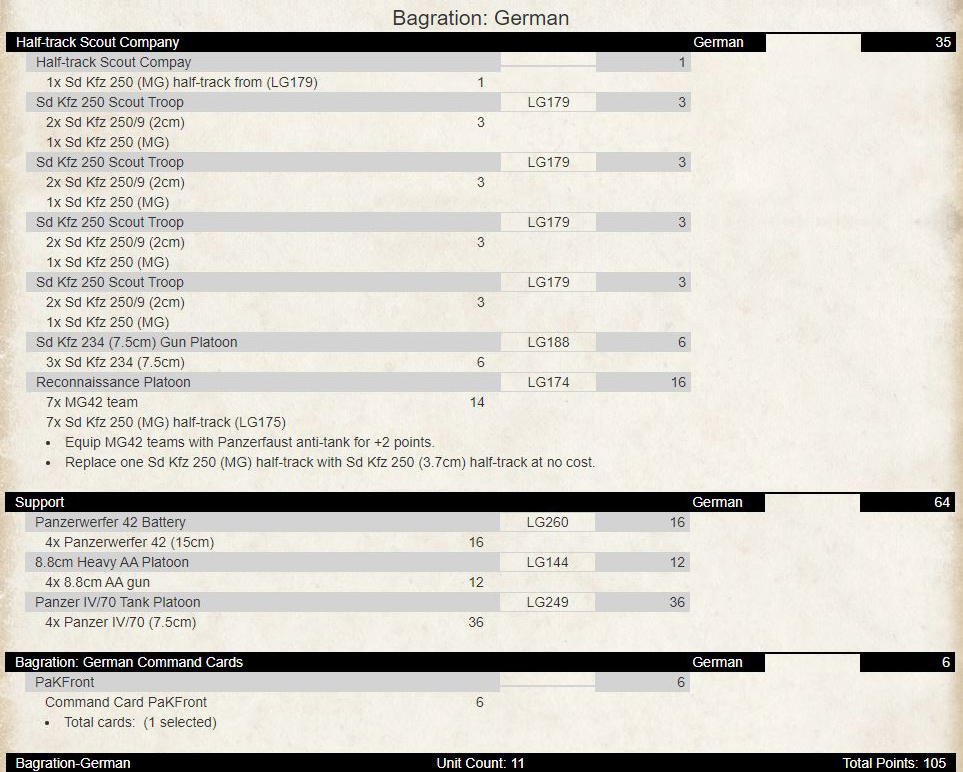 For an 80pt list we would change it out a bit by replacing the Elephants (list 1) with three Panzer IV/70s, making artillery nebs (list 2), dropping a scout troop, and removing the gun platoon: 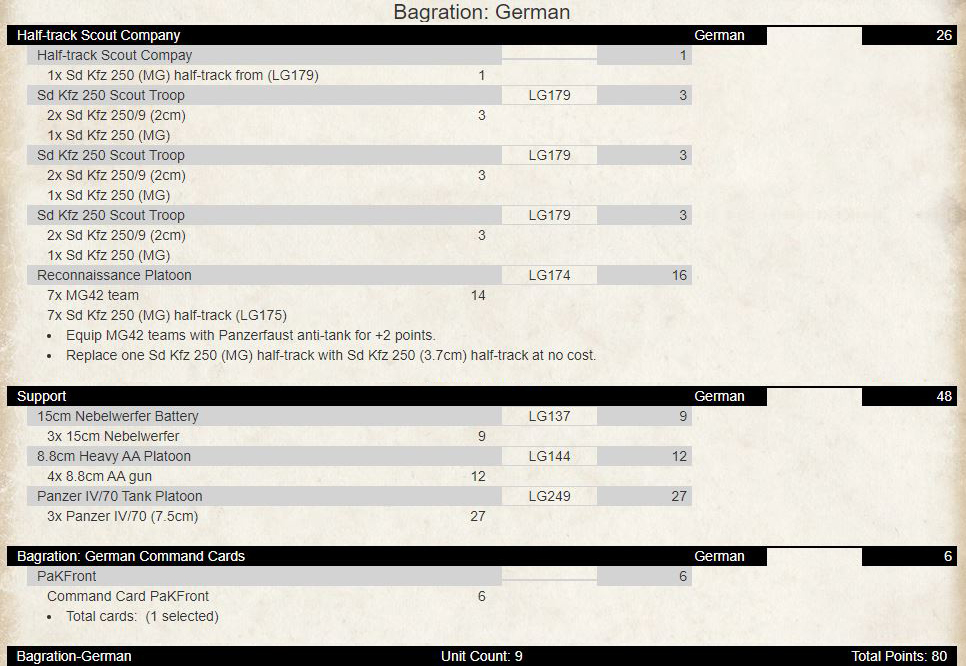 You could take replace the Pak Front command card and reinstate the gun platoon to increase the formation to six units.

For a 55pt game, this is where recon unit lists shine – more flexibility with smaller points than other formations.  Still want to take tanks, infantry, artillery: 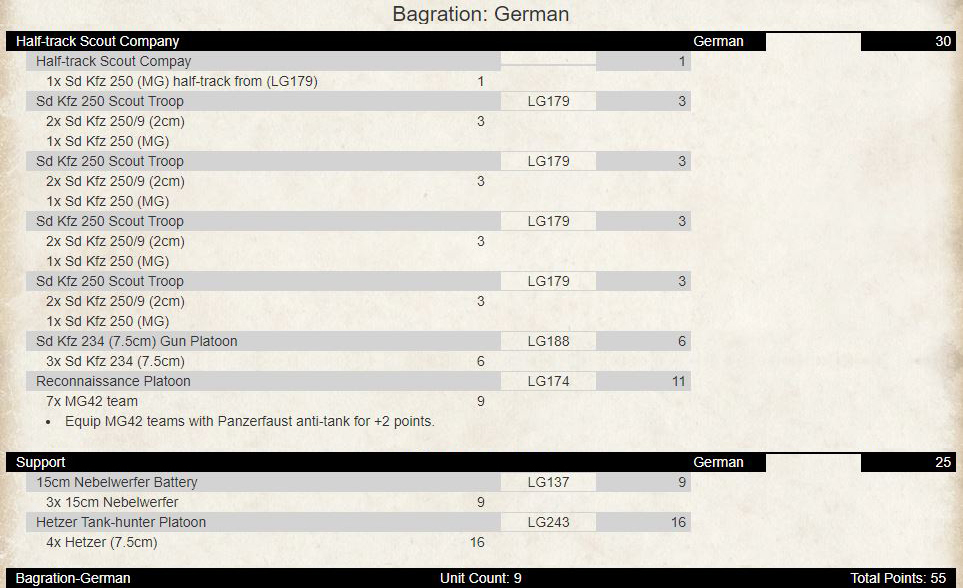 Downgrade the Panzer IV/70s to Hetzers and you still have nebs (you could change these out to Wespes) and still a strong formation that can take on your opponent with a combined arms approach.

This command card formation with the new equipment can provide some interesting new options.  I hope this has given you some food for thought.  Happy list building!