Anyone that has talked Flames of War with me for longer than 10 minutes has been regaled with various stories of horses thundering down on the enemy. Cossacks were my first army in 2004, and you never forget your first army. Cossack players are a small, fanatically loyal group to the army type. Anyone can play a tank, mechanized or straight-leg infantry army in any nation they choose. There’s only one Cossack Cavalry army.

So, when Enemy at the Gates arrived, I grabbed a copy of the book and cards and immediately went about re-creating my favorite army. The stat lines have changed a bit, but we’ll see how they play out when I get them on the field. Here’s how I went about it:

The Cossacks are basically mounted infantry, so start with either a standard or hero rifle formation, the you need to choose the proper card: either Cossack or Hero Cossack Regiment, which gives you the build information for your formation.

I chose the Hero Cossacks although I was truly tempted to be able to make a massed cavalry charge with 29 bases using the standard unit. I want to make an army that will be fun and unique to play and compete against.
Now down to nuts and bolts:

So 40 points for all my Formation units, time for the support!

OK, that’s the troops, rolling in at 87 points. A little of everything and a minimum of motor-ized/armored units as I have historically played a heavily horse-mounted army. Not only is it a change to most players forces, but it’s ecologically friendly as well.

Seriously though, I now have 13 points left over to play with, and these might explain why I chose this build. Time for the command cards.
Beginning of the game, time to throw off the opponent. Reposition one of their Ranged In markers with Maskirova, and one of mine with Recon by Combat. I plan on doing a lot of assaulting, both mounted and dismounted. This might come in handy. Yes, I’m hoping for a bailed Tiger within range (Captured Tank). Lastly, because I think it would be fun. The armor finally catches up to my glorious horses…maybe (Fresh From The Factory).

So that’s it, my first attempt at reviving my beloved horsemen in V4. I’m sure I will tweak this army as time goes on and games are played. In the meantime, I might not win but it will be a memorable fight. 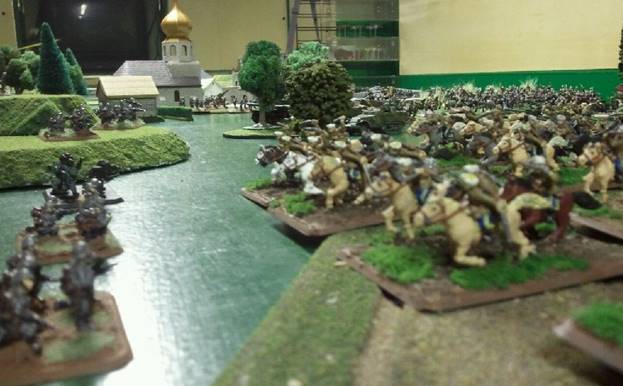