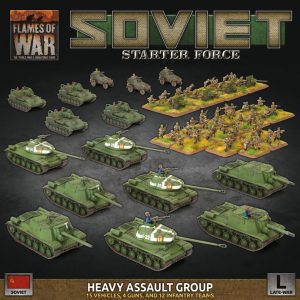 With the launch of the Bagration: Soviet release, I thought I would look at both new starter boxes to see what sort of force you can put on the table.  This article covers the Heavy Assault Group starter box.  This box is ideal for someone either starting out or for the veteran player who needs to add some additional firepower to their existing force.  For the new player, it opens the door to playing Flames Of War without needing to buy, assemble or paint too much and get into playing the game quicker.

So, if we look at what we get in the excellent value starter set (Heavy Assault Group), that will help decide what Formation(s) to run.  The starter set contains the following: 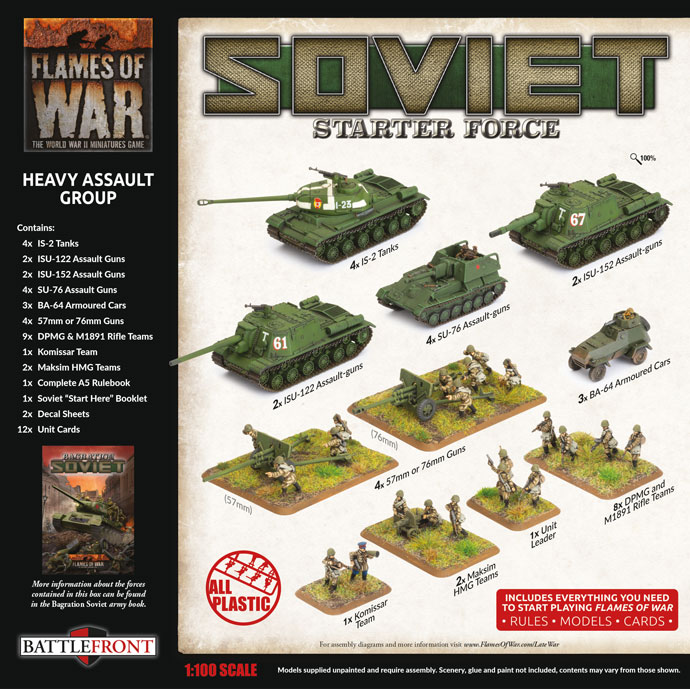 The bonus here is that the rulebook is included in the box – so the new player makes a saving right away.  Now if we look at what Formations are in the Bagration: Soviet book, we can see what we can maximize from what we get in the starter box.  The best Formation to maximize this straight out of the box is the Heavy SP Regiment.  Let us look at what units comprise this Formation:

Looking at the Formation and what we get in the starter box, we can use all the Heavy Assault Guns in the Formation plus one IS-2.  To maximize our investment, we can add an IS-2 or IS-85 Guards Heavy Tank Company in Formation support along with a SU-76 Light Artillery Battery and a Hero Shock Rifle Company. We can also add the following support options; 57mm or 76mm Gun Battery and an Armoured Car Platoon.  This means we can use everything in the box for our list!  So how does this look from a list building perspective: 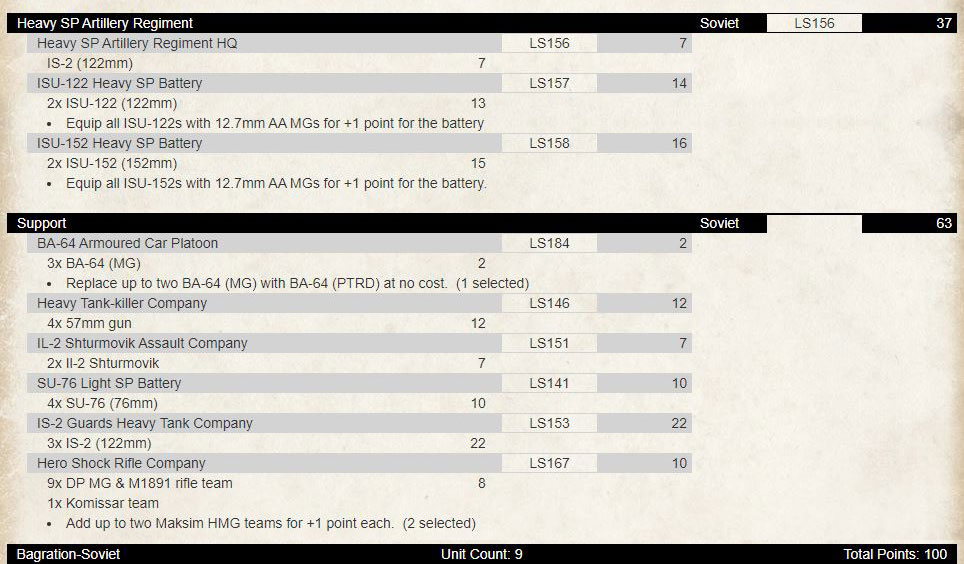 This is a fragile build with only three units in the Formation, but the ISU’s have FA9 SA8 TA2 and the IS-2s are even better with FA10!  So, if handled with care, they will still be deadly.  The other benefit with this list is that it has three artillery templates.  That is right – three!  The ISUs pull double duty, they can bombard and have high AT.  The IS-2 is a beast with AT-14 but nearly impervious in assaults.  You can assault with the IS-2s and infantry after pinning the enemy down with your three templates.  There are Fearless Careful 57mm AT11 guns for defending your objective or rolling up the guns to help the assault.  Shturmoviks (Flying tanks) to provide ability to either take on enemy heavy armour with rockets AT5 against TA2 such as Tigers and Elephants or drop a fourth template on some hapless infantry and gun teams.  Armoured Cars to provide spearhead in those missions where it can be used to get your army into a better attack position. 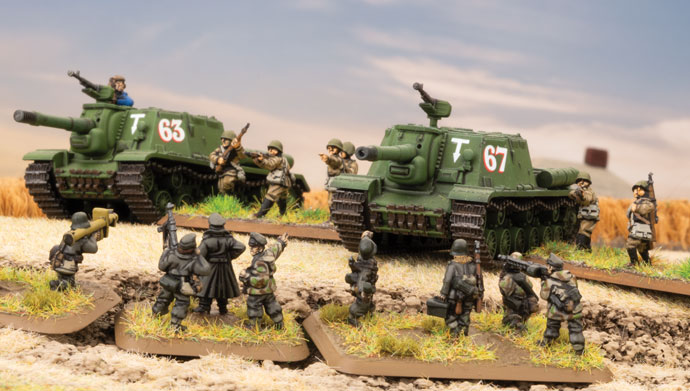 To buy this army you need to only purchase the following for $155:

Now if we look at expanding this starter set with another couple of boxes, we can fortify the above Formation and look at the Guards Heavy Tank Formations.

So, adding a box of five ISUs will allow us to have a stronger Formation with four or five units and we can use the infantry in the box to become a Hero SMG Company to become part of the Formation.  This is how it could look with two batteries of four ISU:

Or with three batteries instead: 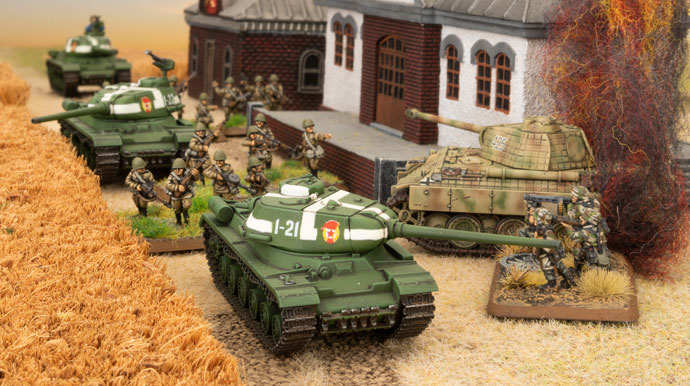 Running a mix of IS-2 and IS-85 gives you flexibility around ROF and AT.  We can also change out the ISU-152 battery with the SU-76s and the 57mm Tank-Killer Battery for the same points which are part of the starter box.  Armoured Cars to spearhead your assault tanks into position.  This will cost:

There is also the IS-85 Guards Heavy Tank Regiment which is made up of:

IS-85 has ROF 2 with AT-12 so you will need the ISU-122s for the AT14.  This is still a hard-hitting force – needs a bit of finesse to run it.  You can always change out the Hero SMG Company for Shturmoviks if you want that extra AT hitting power.

There are so many more options you could run with this box – get the book or hop online to forces website to see what you can out together for under $200 that suits your playstyle.

Even if you run other tank or infantry Formations, adding this box provides you a range of support options to go with them – great value for $100!