I have eagerly been waiting for the launch of Bagration: Soviet for some time as one of my favourite organisations is the Soviet Medium SP Artillery Regiment.  I played this formation in V3 with some considerable success and my opponents tended to underestimate how well it played.  With V4 there have been some changes to the how this medium assault gun plays out in the game.

The biggest change for all three assault gun variants (SU-85, SU-85M, SU-100) is that they are now Fearless Veteran Careful.  This is one of the few careful units in the Soviet army.  Now they are harder to hit on 4+.  Veteran skill means you have a better chance of pulling off tactics such as Blitz or Shoot and Scoot.  Fearless makes it easier to remount when bailed out and for last stand checks.  The other change for SU-85M and SU-100 is they lose FA9 down to FA7.  FA7 is still better than FA5 in the SU-85 but with being careful now means they should have a better chance to take less hits anyway.  The SU-85 and SU-85M have a 4+ cross check and the SU-100 has a 5+ cross check – so watch out trying to ambush from the woods!  Fortunately, there is a new command card called “Unditching Logs” that for 1pt allows you to reroll failed cross checks for that unit until the end of the turn.  This will help improve your chances of moving in or out of woods.  Now if we look at firepower now, the SU-85 and SU-85M have ROF 2 AT12 with a range of 28” and the SU-100 have ROF 1 AT15 with a range of 32” but also the slow firing rule.

Let us have a look at the formation:

As you can see, we can have mixed assault gun batteries in the same formation along with an intrinsic infantry unit as well to help balance the formation and make it more robust.  The HQ is a single T-34 but it is also Fearless Veteran Careful – very useful to have.

So, in my mind there are two ways to build this list – have a mixed regiment of SU-85M and SU-100 or just either SU-85 or SU-85M and get you high end AT from other units such as IS-2, ISU-122, 100mm AT guns or using the “Decoy Tank Company” command card.  The decisions will normally come down to what points you will be playing and your playstyle.  For the purpose of this article, we will use the standard 100pts list.

First, we will look at the mixed battery option:

The formation comes in at 71 pts leaving us 29 pts to add some support options to bolster your force.  I like to run a balanced force so I would want to add some artillery options – ideally two if I can plus some recon.  Equipping your infantry with the “RPG-6 Anti-tank grenades” command card gives them some intrinsic AT capability – especially for assaults where the Hero SMG company assaults on 2+!

So far, the formation has high end AT with the SU-100 battery and decent ROF2 AT12 for everything else.  I like to have five in the SU-85M battery if possible as it gives me 10 stationary AT12 shots.

We have a range of artillery options for the Soviets.  We can take a SU-76 light SP battery in formation support plus we have the options from support to take up to SIX units of artillery ranging from 76mm, 122mm, 152mm batteries and the mighty Katyusha! Not only that, but we also now get an option to take an observer as well.  One other multi-purpose unit we could also consider is the Flying Tank, the IL-2 Shturmovik which has a AT5 against top armour template to take care of  everything, from infantry and guns to the heavy tanks such as the Tiger and Elephant. 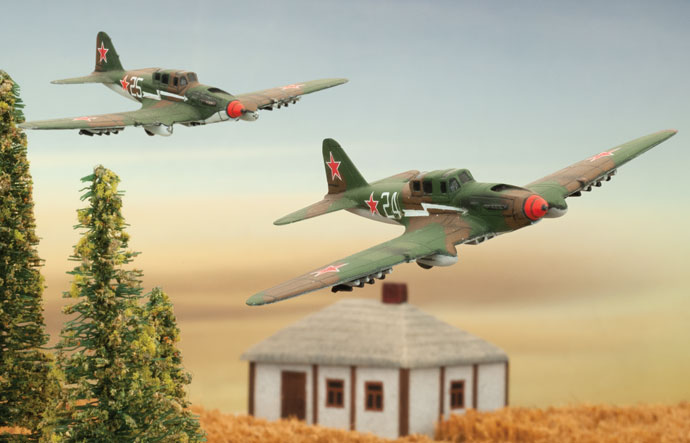 With recon we have three options available to us. Armoured Reconnaissance Platoon or Reconnaissance Infantry Platoon as formation support from the Reconnaissance Company formation, BA-64 Armoured Car platoon from support, and “Decoy Tank Company” command card.

So, lets add a couple units of artillery, air support and some recon to round out the force: 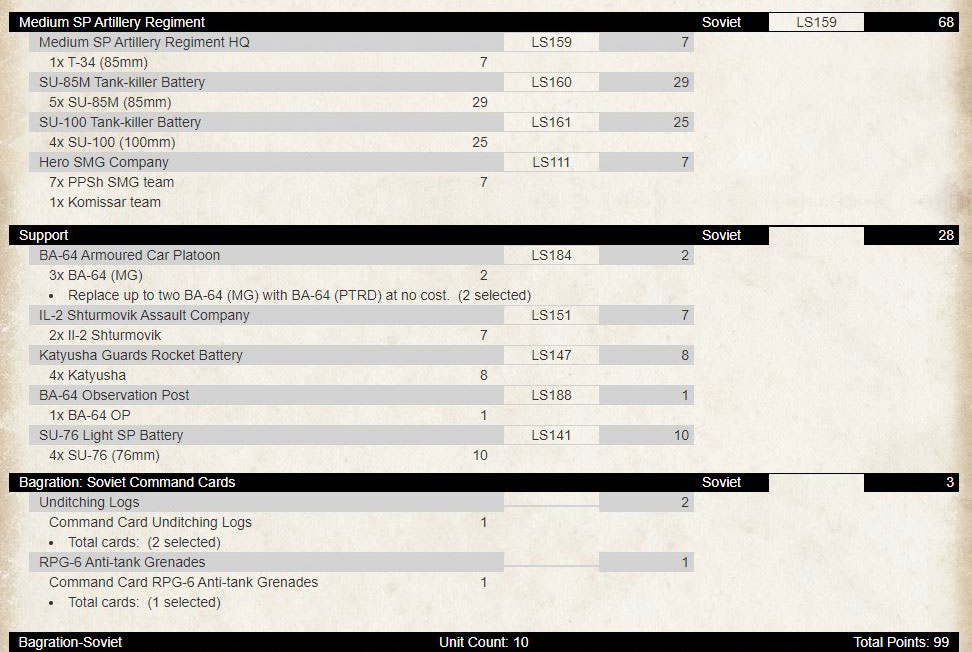 Adding in these options gives you the ability to have 3 templates plus a secondary AT option with the Shturmoviks, an OP to range in everything and recon to spearhead you in those missions that allow it to get into a great attack position.

Now our second option is to look at taking just SU-85Ms and getting our support options to provide the high-end AT, artillery and recon.  The “Decoy Tank Company” command card provides us with the ability to have some captured German tanks with spearhead.  This company replaces the BA-64 slot in support or in the Reconnaissance Company.  A maximum of three tanks and you can select from a single Tiger and up to three of Panther, StuG and Panzer IV in whatever mix you like, and adds some flavour to your force and a change from soviet green! 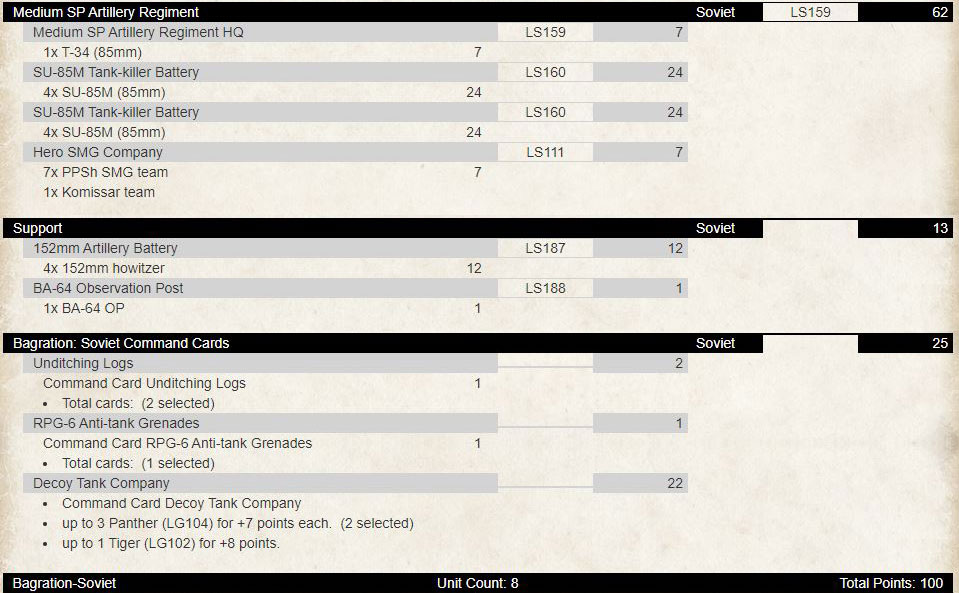 So, you get Spearhead with the Decoy Tank Company and pulls doubles duty as your high end AT along with some heavy artillery to defend an objective with AT12 and FP 2+ in bombardment to dig out enemy guns and infantry teams.  With 35pts left over in support you could also swap out the heavy artillery, decoy tank company with 3 x IS-2s for 22 pts, 122mm artillery battery for 8pts, observer BA-64 for 1pt and BA-64 armoured car platoon with 7 for 4 pts.  Another option is to use the 100mm Tank Killer Company for your high-end AT.  Fearless Veteran Careful with AT15 for 11 pts.  This opens the options to take two artillery batteries for 16 pts (you choose your combo), Shturmoviks for 7 pts and an observer.  Lots of mixing and matching support options with this formation.

I have 10 SU-85Ms and 5 SU-100s that are ready to be dusted off the shelf now that Bagration: Soviet has been launched that I plan to terrorise my opponents with.  Happy list building!
~John