I have finally finished my Big Four Of Late War T-34 company. Its only taken a year but it was worth it, and just in time as Soviet T-34s get a massive upgrade in Bagration: Soviet!

Under Fortress Europe Soviet players were limited in the number of T-34 (85mm) tanks that they could take, however now there are no limits and the cost to upgrade them got cheaper. Let’s compare the Hero T-34 lists to see how much bang for buck you get. 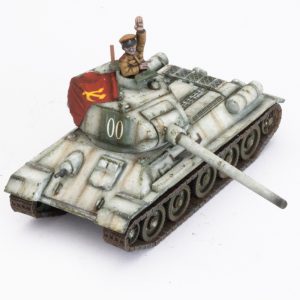 I’m still happy that I painted up all of the 76mm turrets though, as it means that the army can still be used in Mid-war.

To pad out the Hero T-34 (85mm) list I’m going to add most of the in Formation support options from the list, and add an extra ZSU M17 platoon, BA-64 armoured cars, and a platoon of IS-2s to give me some high anti-tanks and a strong assault platoon.

Most of these extras are already painted, although I’ve just started the IS-2s and I’m still waiting to get my hands on some ZSUs…