For some time, Tiger and Panther tanks were the top predators on the World War II Eastern Front. Designed to readdress the technological gulf between the medium panzers (III and IV) and the T-34 and KV-1, the “Big Cats” made up for Germany’s shortcomings and then quickly surpassed them. Where Tigers and Panthers went, kill ratios for tanks skyrocketed with the Third Reich’s innovations in armoured technology coming out on top. Or at least that was the case until late 1943 when the IS (Iosef Stalin) series of armoured vehicles started to appear on the battlefields of the Eastern Front. Capitalizing on lessons learned in tank automotives, armour design and firepower, the IS turned the tables on Hitler’s prized tanks. The battlefield hunters quickly found out that they could become the hunted!

In Flames Of War the IS series of tanks, featured in the new book Bagration: Soviet, provides the Soviet player with some serious tools to fight back against the Tiger and Panther tanks that dominate the game table (and it also works quite flexibly in support of infantry too). Do not let this fool you though, while the IS tanks can outfight the German predators, they are not the same. The IS vehicles require a different approach on the games table, which we will discuss here. 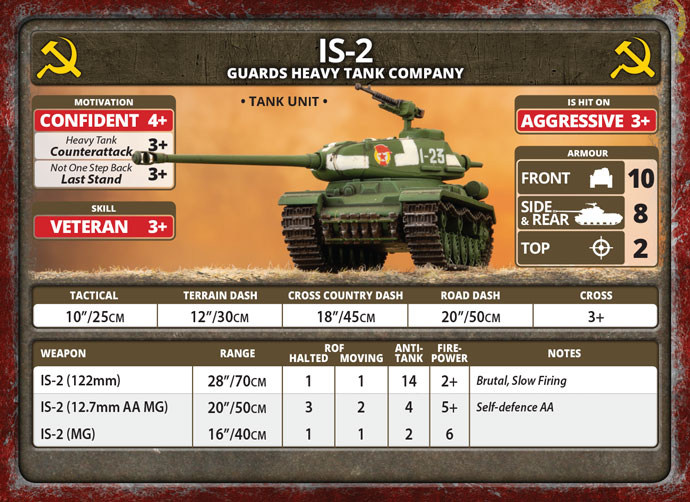 The IS-2 is a real monster! Front Armour 10, Side Armour 8 and Top Armour 2 makes it one of the most heavily armoured vehicles in the game. If opponents shoot it out at long range, the IS2 will be immune to medium tanks like the Panzer IV. It will also stand a pretty good chance of shrugging off 7.5 cm and 8.8cm shots from Panthers and Tigers.  When you consider it will be Front Armour 11 (for range) and the German “cats” have AT 14, IS tanks will be bouncing their shots 50% of the time. Other than the later marks of Churchill, no other allied tanks in the game have similar armour to even stand a chance against these big German guns!  The IS-2 also has a Last Stand of 3+ and Veteran Skill so it can make Blitz moves or Shoot and Scoot fairly reliably. In a straight comparison with a Tiger, the IS-2 is hit on a 3+ instead of a 4+, but it also has Front Armour 10 while the Tiger has a value of 9! 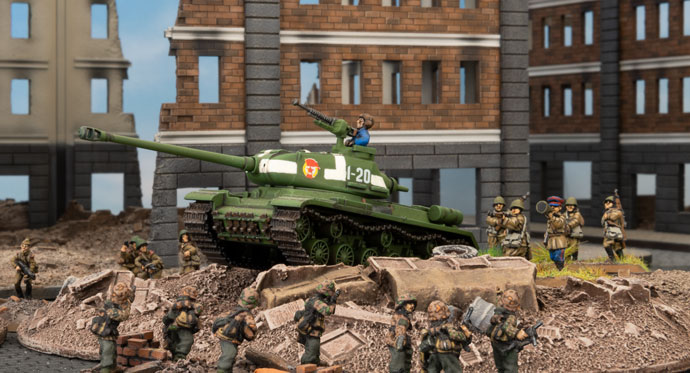 Despite these stats though, the big difference with the IS-2 is the gun. Compared to the Tiger and Panther the IS-2’s 122mm canon range is only 28” while the German tanks both have a range of 40” and they all have the same AT rating of 14. Additionally, the 122mm is rate of fire 1 and is Slow Firing. Because of this the IS-2 is not the mobile long-range anti-armour sniper that the German tanks are. Sitting back and taking pot shots is not really an option for the Russian heavies! But when you hit your target this is when the IS-2 shines.  A penetrating hit from the 122mm canon out classes even the German 88! The AT is a fearsome 14, and more importantly the IS-2 has an amazing Firepower of 2+. If you can Hit with the IS-2 you are going to break something. Moreover, it also has the Brutal rule so the 122mm has quite a lot of flexibility which the German guns do not have. If you want to take on dug in infantry instead of tanks it should be no issue. The rerolls for saves caused by Brutal guns combined with the Firepower of 2+ will outperform the Tiger and Panther all day long (who lack the Brutal Rule and are only Firepower 3+). 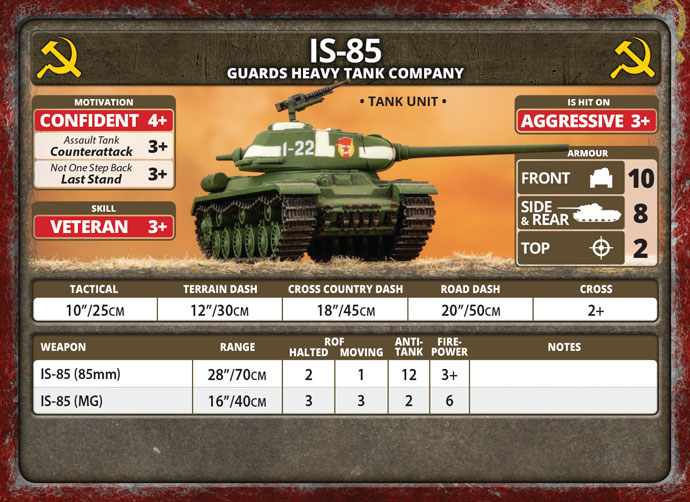 Though the IS-2 is impressive, its predecessor the IS-85 also bears some separate consideration. The IS-85 was used as an interim design mounting the plentiful 85mm gun used on T-34s and SU-85 Self Propelled Guns. This was necessary as a stop gap measure while the 122mm canon was produced in enough numbers to catch up to the Russian heavy tank program which had already turned out hulls for the IS-2. Rather than having the tank sit idle, the lighter gun was used to get the tanks on the battlefield. Because of this, The IS-85 is in all ways the same as the IS-2 except, unsurprisingly, for its’ gun’s performance (and it costs 1 point more). The 85 mm canon is range 28” with a Rate of Fire of 2, AT 12 and Firepower 3+. This means that when it comes to performance it splits the difference between the 122mm and the 88cm or 7.5cm guns of the German “Cats”. The Anti-Tank value of 12 is not as high but is respectable and it shoots twice when stationary (or Blitzing). Also, unlike the IS-2, it does not take the slow firing penalty. So, if you think that the lower chances of hitting with the 122mm canon, in exchange for the impressive 2+ Firepower, are too big of a risk for you to take, then the IS-85 might suit you. Or better yet, you can use both IS series tanks in combination! Putting it Into Practice:

To create a 100-point army list that gets the most out of your IS series tanks you should start with (unsurprisingly) the IS-2 Heavy Tank Regiment from the book Bagration: Soviet. I would suggest the following composition as an example 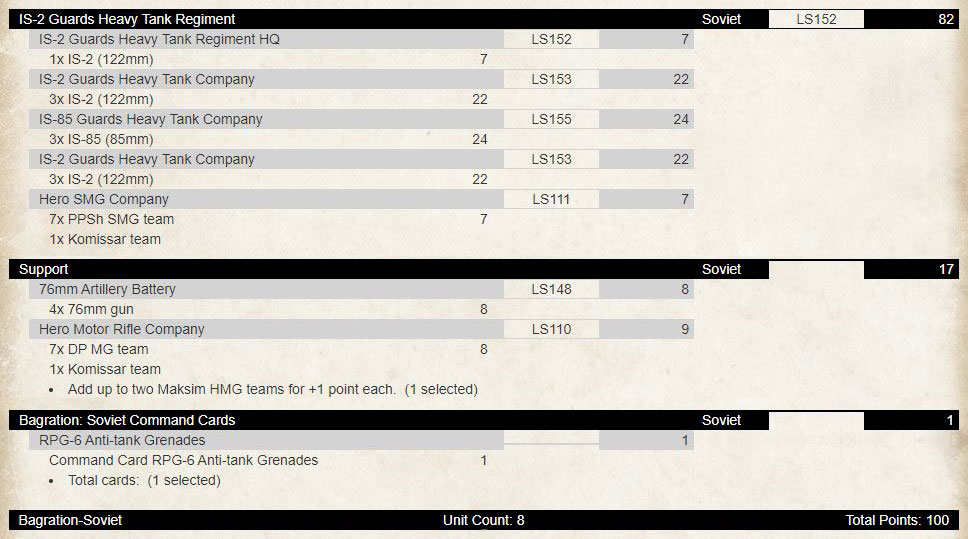 On the table you will want to rely on your (likely) superior numbers of heavy tanks and their Front Armour of 10 to get in close to any Tigers, Panthers or other tanks to take them out. Fortunately, you can do this fairly easily. The IS-2 is only around 7 points where the Tiger costs 13 points (for the SS version) so quantity should be on your side. The key here is to be aggressive with the IS-2s moving quickly relying on cover, speed and good armour to put the pressure on the opponent’s line! The IS-85 Company can advance to moderate ranges then take pot shots with their 85mm guns at the enemy to provide covering fire while the IS-2s dash into position to attack (then Blitz in subsequent turns to bring the enemy into the sights of their 122mm canons). The Hero SMG Company can increase the numbers in your formation offsetting its break point while staying close to the advancing tanks to ward off infantry, or commit a timely assault on anti-tank guns or bailed out tanks. Lastly, the Hero Rifle Company and the 76mm Artillery can provide a base of fire to back up your advancing units and guard objectives. For reserves you can leave the 2 IS-2 Companies off the board and dash them forward when they arrive, or they can surprise opponents that have pushed forward into your deployment area by moving onto the board and quickly lining up an assault.

Put Your Tanks on The Table

As we have seen in this article, the IS series of tanks from the new Bagration: Soviet book should be more than a match for any Panther or Tiger Tank that you may face on the Flames Of War battlefield. But to be victorious you will need to keep in mind the details peculiar to these tanks and play both aggressively and smart. Front Armour 10 and the powerful 122mm (or 85mm) gun in the hands of a good player makes an effective combination that any German player is soon going to learn to fear. So, grab your heavy tanks, paint on the red star and unleash the unstoppable might of Mother Russia on the Hitlerite Invaders!