With the launch of D-Day: Waffen-SS release, I can finally look at using a massed Panzer IV force as I have 22 of them! They are Fearless, Trained, Aggressive in the Waffen-SS formations, so should be able to pack them in a 100pt list! We will also explore 80pt list versions (in New Zealand we have Flamescon later this year which is 80pts LW). I also want to see what a balanced list looks like vs a massed Panzer IV company.

Looking at the Panzer IV platoons, we get three tanks for 13pts, four tanks for 18pts or five tanks for 22pts. Let us look at the 100pt lists first and what you could do to squeeze them down to 80pts if you needed to whilst keeping as many Panzer IVs as possible.

Starting off with the balanced options first we want to look at making sure we have some high-end AT, formation strength, Infantry and artillery. This list combines those options as shown here: 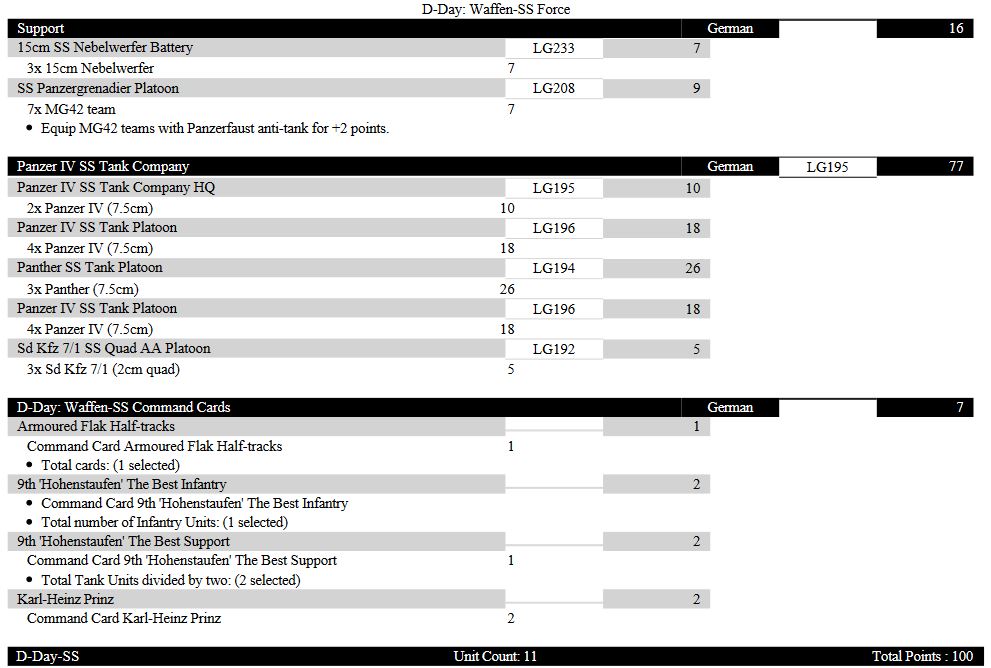 Five platoons for the Formation break. Ten Panzer IVs and a Warrior to lead the company. Karl-Heinz Prinz allows you to re-roll a failed Reserve roll and you will have at least two tank units in reserve so this can help expedite getting them on the table quicker where you are playing in missions with reserves.

Panthers with AT14 for heavy duty AT work. SPAA to protect your tanks against planes and great for anti-infantry work. Command cards used to upgrade them to armoured and now Careful to help them stay in the game longer. Infantry, upgraded to Careful as well to keep them in the game longer to hold an objective or support an attack. All of this rolled up together makes relatively balanced list depending on your play style.

Now to play an 80pt game and keep the Panzer IVs, we need to make a few changes including changing out the Panthers to 8.8cm guns: 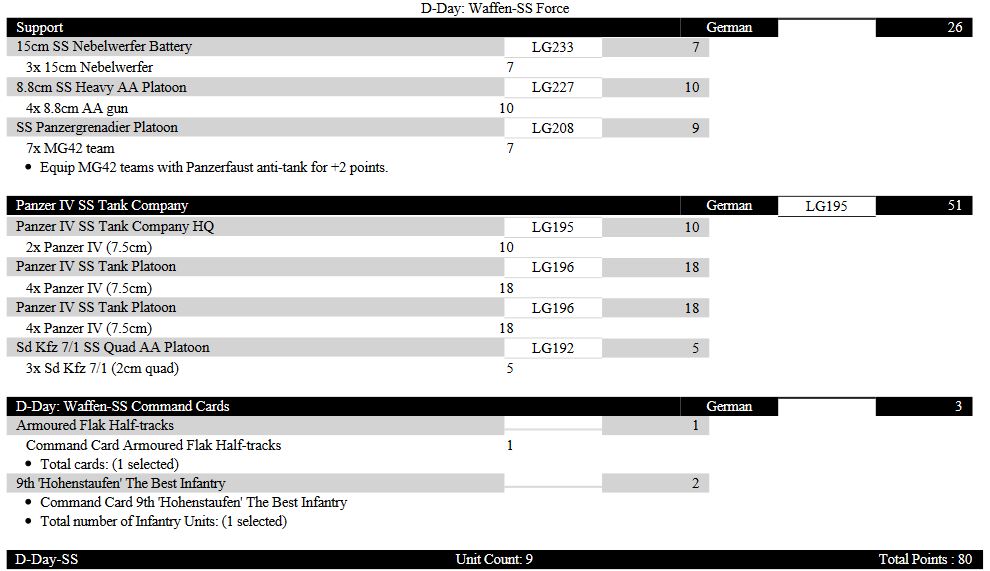 So, we still have a balanced list. I kept the Infantry as Careful, but you can change that out to add a Panzerschreck instead or include the Formation warrior or upgrade the Quad AA Platoon to Careful – your personal choice.

Looking at the attacking force option now, we want to make sure we have some high-end AT, Formation strength, artillery and recon for Spearhead. This list combines those options as shown here:

Fourteen Panzer IVs! Panthers with AT14 for heavy duty AT work. Nebelwerfers with an OP to deal with infantry and gun teams before the Panzer IVs get their assaults in and armoured cars to Spearhead to get the rest of the force into an attacking position!

Now to play an 80pt game and keep the Panzer IVs, we need to make a few changes including changing out the Panthers to 8.8cm guns and losing the artillery: 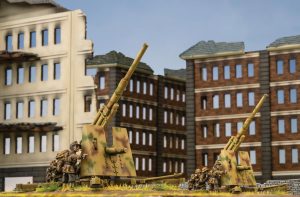 So, we keep the Panzer IVs – Formation is four units strong and still fourteen Panzer IVs! Armoured cars to Spearhead, and 8.8cm guns upgraded to Careful to take care of heavy tanks. We can still make some changes here depending on your preferences. If we remove the armoured cars and downgrade the 8.8cm guns, we can purchase the “PAK Front” command card for 6pts. This gives us the ability to spread them out across our deployment area. Being nests means that your opponent needs to re-roll firepower tests to take them out and you can control or deny areas of the board if you deploy them wisely and you can focus your Panzer IV attack where you want to.

I hope this has given you some food for thought and if you like massed Panzer IVs like I do; we can run them again now in V4. Happy list building!