I love building recon Formations and with the release of D-Day: Waffen-SS, I was excited to see one of my favorite iconic vehicles – the Puma – in its own Formation.  So, let us explore how we could build a semi-competitive list with the formation.

We end up with a relatively strong formation with a minimum of three units and a maximum of nine units!  So, if we take five of the Puma SS Scout Troops and take the infantry platoon, we should end up with a unit count of seven – difficult to break especially if we take some Command Card upgrades.  The core scout troops have only two vehicles in each troop, so they are going to be a bit brittle and need some careful handling!  They have a 5cm gun though, so is AT9 and a big threat to light and medium armor.

Now bear in mind that everything in the Formation will be Fearless, Trained, Aggressive.  Fearless means they are more likely to stick around however they are easier to be hit on 3+ so you want to optimize the Scout attribute with the armored cars as much as you can so they are hit on 5s or 6s. This comes in at 36pts and has seven units in the Formation and five units capable of spearhead.  Giving the infantry the “Best Infantry” Command Card upgrade, they are now Fearless, Veteran, Careful.  This unit is now harder to hit, can Blitz and Stormtrooper on 3+ and being Fearless make them dangerous in assaults.

With the core Formation done, we now need to look at what support options could be taken.  With the ability to choose from either D-Day: Waffen-SS or D-Day: German black box units, you can mix and match what you want to suit your playstyle – especially when choosing between either Fearless and Confident and/or Aggressive and Careful.  Support options need to be taken from the D-Day: Waffen-SS chart.

So, let us look at what we need to consider from a support perspective for this list.  They should be supported by tanks, high end AT, artillery and what we need to cater for around reserves.  Most games are 100pts, but several tournaments are smaller in points – some one-day games have even gone to 50-60pt games to get four or five quicker fast paced games.  This is where the Puma Company lists shine – more flexibility with smaller points than other Formations.  Looking at a standard 100pt game we have 64 points left to play with.

I like to look at combining a high-end AT unit as close to 40pts as possible to have one unit in reserve – in those missions where you need them.  The Panther SS Tank Platoon is 44pts for five.  High-end AT, can assault if needed, moves easily through difficult terrain and range of the gun is 40”.   With five in the platoon, you have additional hitting power and survivability – even on 3+.

Artillery next and I am looking at the Hummel SS Artillery Battery of three for 9pts.  Fast at digging out infantry and gun teams with 2+ FP.

We should add an observer for 1pt – take your pick here of the Panzer III OP or Sd Kfz 250 OP.

We need to keep our opponent honest if our Panthers are in delayed reserve, so let us take an 8.8cm SS Heavy AA Platoon for 10pts.  You can control and deny areas of the board with these and with multiple spearhead units in certain missions expand your kill zones.  They also double as AA deterrent for planes with 3+ FP. 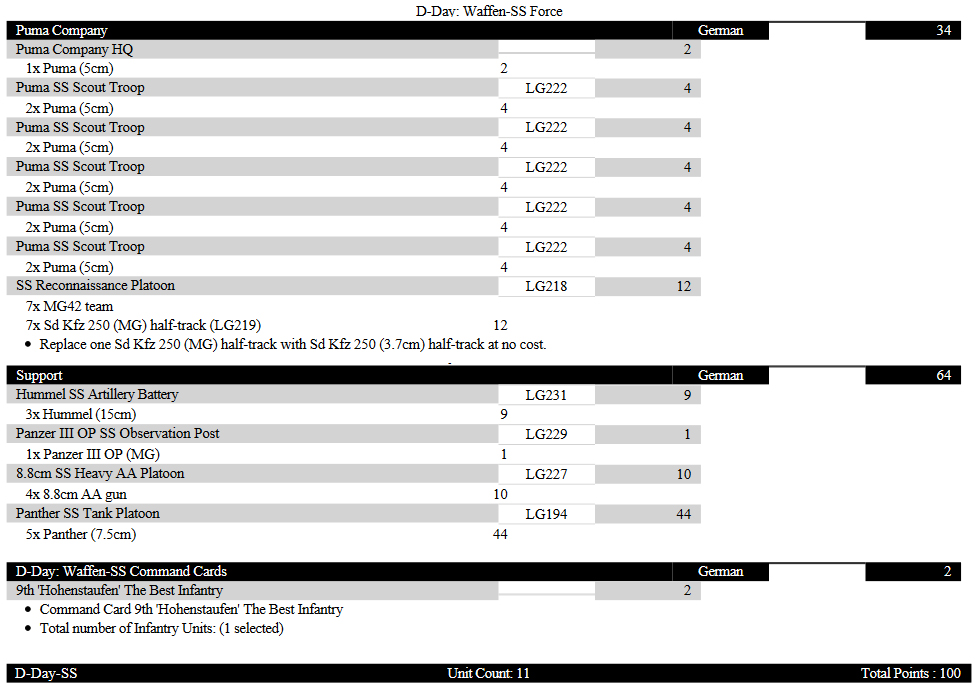 If you want to upgrade your 8.8cm SS Heavy AA Platoon to be Veteran Careful, then remove one Puma SS Scout Troop to pay the four points for the upgrade.

For a smaller sided game or tournament, you can change out some of the Formation units, remove some of the Command Card upgrades, change the Panthers for Panzer IVs or Stugs.

Here is an example list for a 70pt game: 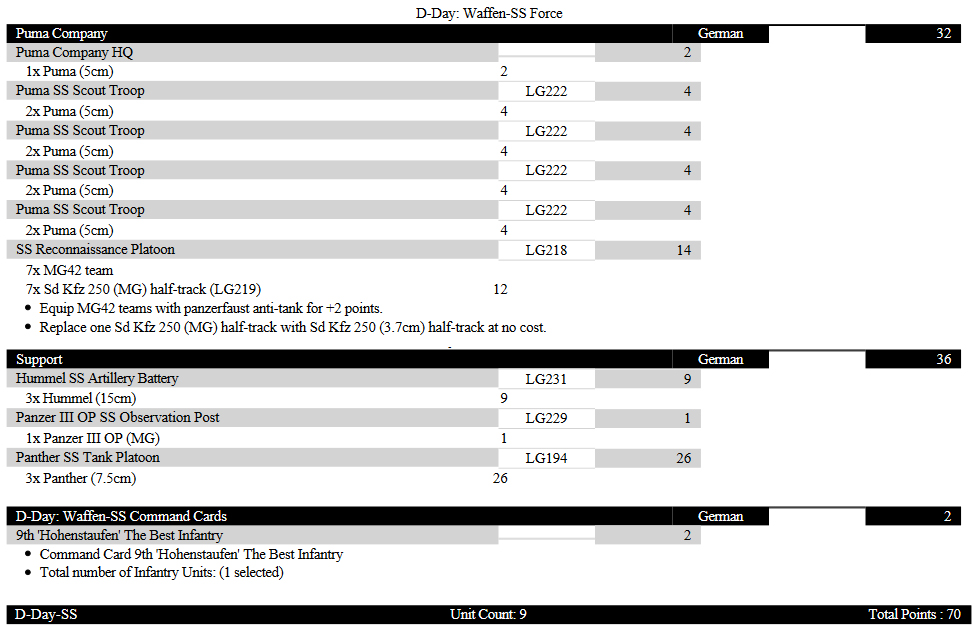 This Command Card Formation can provide some interesting options and can take on the British and American recon formations with similar numbers.  I hope this has given you some food for thought.  Happy list building!