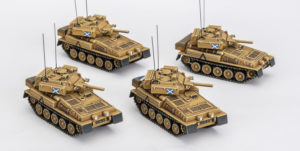 When work started on WWIII British and we were seeing early prototypes of the Challenger model, it didn’t take much convincing to decide to do a new British force.

The idea of doing a desert force appealed to me as I’ve already been painting a lot of green with black camo on my WW2 Americans, so I chose to theme the army for the Gulf War, or Operation Granby.

I came up with these forces trying to maximise Challengers, while also getting some cool new Warriors in there, and useful recon.

A few of us in the office are planning to do some fun “big boy” games at 150 points, and that will allow me to field a more complete company of Challengers, while only having to paint three extra tanks and some aircraft.

(The British were using Panavia Tornados in the Gulf, so I’ll use those models with Harrier stats) 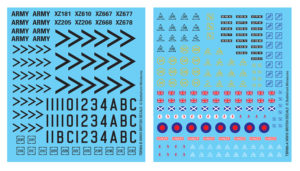 I worked together with Casey on updating the British decals, and I was keen to get the markings for Gulf War forces in there. We’ve got the Chevrons and large numbers, as well as the little Desert Rat symbols. I also found a few pictures of tanks with Scottish flags, and that is what I’ve chosen to use on my force.

The Scorpions were the first platoon I decided to work on while we awaited the arrival of the new plastics. They’re a great little kit and are a good way to test a new scheme quickly since they’re so small. 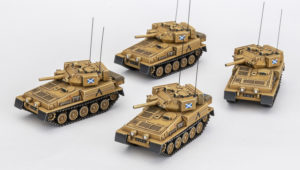 Painting for these was pretty straight forward, and I’ve kept them clean. I can go back an add pigments/dusting later but I’ll wait and see how the Challengers turn out first.

The yellow base colour has possibly turned out a bit darker and more saturated than the real thing, but I think it’s in the ball park.

I put a large Scottish flag on the back of the platoon commander, which I will probably implement on the Challengers too. 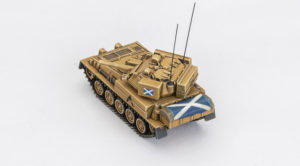 I’m looking forward to getting the new toys as much as you all are I’m sure, and this army will be a joy to paint.