DDPM 4 Colour
Desert Disruptive Pattern Material (DDPM) comes in three flavours. The first version was introduced in 1985. This version simply replaced the four colours of the temperate/tropical DPM with browns and tans. At the time this variant was introduced there was no real requirement for the UK’s MoD to acquire very many uniforms in this colourway. It was therefore sold directly or through licensing agreements to various nations in the Middle East, including (but not restricted to) Iraq and Saudi Arabia. ‘Dense’ DDPM
The second variant was heavily used by the UK forces during operation Granby (the first Gulf War). The primary reason for this version coming into being was the realisation that British troops might be mistaken for enemy troops if deployed to the Gulf wearing the four colour Desert DPM.
A three coloured type was trialled, however it was deemed to be too close to the four colour type, so a two coloured version was rapidly developed.
This version is often described as ‘dense’ pattern as three of the four standard DPM colours were replaced with a medium brown over a tan base, causing the darker shapes to cover a large amount of the light colour.
While this was a quick expedient to get into production, an important factor as the troop build up during ‘Desert Shield’ gathered pace (therefore a pressing need for an appropriate uniform existed), it was considered too dark to be properly effective in the sun soaked sands of the Middle East.
Ironically enough a variant of this colourway was chosen for the later ‘Soldier 95 and Soldier 2000’ type desert camouflage uniforms. 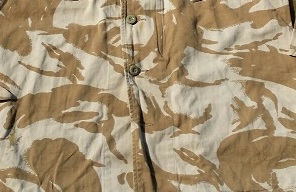 ‘Sparse’ DDPM
Toward to end of the first Gulf War the British stared to deploy a variant considered to be more effective in the theatre of operations. This version referred to as ‘sparse’ DDPM is quite similar to the type described above, however the pattern essentially does away with replacing the shapes of the two minor colours in temperate DPM with dark brown in favour of those shapes being the same light tan as the base colour of the uniform. This has the effect of creating a more sparse type of camouflage pattern. This variant was fairly short lived, existing only between late 1991 and the introduction of the ‘Soldier 95’ uniforms (both temperate and desert) during 1995/96. For the figure below I chose to go for the most common variant, ‘dense DDPM’. For the purposes of our fictional conflict any of the versions would be appropriate, with the four colour type being the least anachronistic for 1985, but also far more complicated to replicate in the 15mm scale. However in a case of art imitating life I don’t consider it to be particularly far fetched for one (or both) of the two colour types to be quickly developed for exactly the same reasons that they were in the real world. Step 1:
The figure is uncoated with black Vallejo Surface Primer to give the follow on paint something to ‘bite’ into. 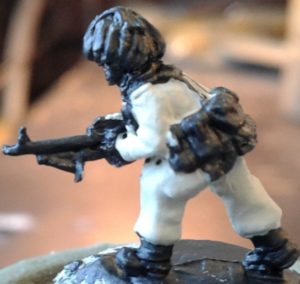 Step 2: Next I paint the uniform base colour of Vallejo Model Color 70.884 (Stone Grey). Step 3:
Then I paint Vallejo Model Color 70.821 (German Camo Beige WWII) as the main colour for the Hessian strips on the Helmet. Step 4:
Following the main color of the Helmet strips I paint a random selection of the hessian strips with Vallejo Model Color 70.843 (Cork Brown). Step 6:
With the desert tans in place I next colour the ’58 Pattern Web Gear and Scrim netting scarf with Vallejo Model Color 70.920 (German Uniform). I start with Vallejo Model Color 70.875 Beige Brown as the base colour for the flesh. Step 8:
I paint the plastic furniture of the weapon with Vallejo Model Color 70.862 (Black Grey). Step 9:
I move onto metallics, starting with Vallejo Model Color 70.863 (Gunmetal Grey) on the metal parts of the figure’s L7 GPMG.

Step 10:
I complete the initial block painting of the figure using Vallejo Model Color 70.801 (Brass) for the belt of rounds hanging off the left side of the GPMG. 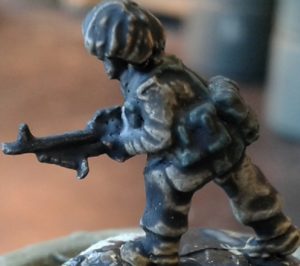 Step 11:
With the block painting done, I then cover the figure with an all over coat of Vallejo Game Color 73.201 (Black Wash). Step 15: I complete the skin by painting the highest parts of the flesh (for instance Hose, Cheek bones etc) with a highlight of Vallejo Model Color 70.955 (Flat Flesh).

Step 16:
Before finishing the metallic colours, I go back over the GPMG’s plastic furniture with Vallejo Model Color 70.826 (Black Grey). Step 17:
The metallics are then re-defined using Vallejo Model Color 70.863 (Gunmetal Grey) for the metal parts of the weapon and 70.801 (Brass) for the ammunition belt.

And the finished product after a coat of matte varnish: