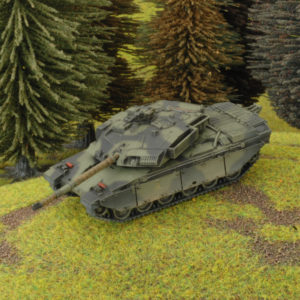 My current British army is based around a Chieftain squadron with a full 14 uparmoured Stillbrew Chieftains, some Swingfire missiles, a couple of Scorpions, a platoon of infantry and a little support. It’s a good little force, and I’m quite happy with its performance. However, my Chieftains have been usurped as the biggest tanks on the battlefield! The Challenger is even bigger!

I know it’s a weird reason to want a new tank, but really any reason will do, and I do want them. At present I’m not looking to totally replace my Chieftains, but I’m quite excited about the idea of adding a troop of three Challengers to my force. 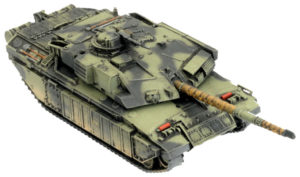 The Challenger is essentially an uparmoured and re-engined Chieftain, so the interesting question is what will I do with them once I have them? The interesting differences are increased frontal armour and increased dash speed. While even my uparmoured Chieftains are still unfortunately vulnerable to Soviet 125mm and NATO 120mm guns, the Challenger shrugs them off with ease. That makes it ideal for holding a flank or occupying an exposed position securing the centre of my line. They still need to worry about being flanked or hit with massive missiles like the A10’s Maverick, but those problems can be mitigated, and meanwhile they can sit there using their big guns at long range without having to worry much about return fire.

Since the kit comes with two variants, I have a choice between the basic model and the version uparmoured with the ROMOR kit as seen in Operation Desert Storm (for those who are curious like me, ROMOR stands for Royal Ordnance Military Operational Requirement, rather prosaic really). I’m really torn here. I like the ROMOR kit because it’s such an ugly bodge –- a big box of extra armour to protect the really thin nose that doctrine said would never be exposed because they’d always be fighting hull down, but at the same time I’m also drawn to the (relatively) clean lines of the basic model. In the end, I think the decision for me comes down to the basic model already having an armour rating of 20 which is enough in most situations, so I’ll save the extra two points a tank. At nearly twice the price of my Chieftains, the Challengers are going to be interesting to squeeze in to the force. I’m inclined to swap out one Chieftain troop for a Challenger troop from Formation Support, and either play games with a few more points or cut back elsewhere in the force. With Challengers in my force, another exciting new kit, the Warrior armoured personnel carrier, starts to attract my attention. The Warrior would be a straight one-for one swap for my FV432 armoured personnel carriers. The Warrior is faster, better armoured, and most importantly, has the same 30mm gun as the Scimitar light tank. The upgrade doubles the cost of the platoon, reducing my tank strength by a Chieftain, but having the infantry more able to look after themselves with the Warriors to deal with light enemy armour and their Milan missiles for medium armour, it might be worth it. I think I’d have to try them out to see how the extra capability works for me, but that won’t stop me from adding a platoon to my force.

Hmmm, my painting list is starting to grow, especially with the Chieftain Marksman AA tank coming out as well. It’s a Chieftain hull with a honking big AA turret on top, and with my bigger is better theme, I can’t resist it! I’m not sure whether my force needs the Marksman (although now that i think about it, I recall getting slaughtered by Soviet helicopters), but three AA tanks for the cost of a Chieftain sounds good – I’m definitely going to have to play bigger points games, otherwise I won’t have enough Chieftains to actually kill the enemy! I do think I’ll manage to resist the last two new plastic kits, the Fox armoured car and the MLRS rocket launcher. I’m tempted to get them to make into objectives, but they don’t really fit in the theme of my force. I already have a pair of Scorpions for reconnaissance, so the Fox, although cute, isn’t really needed, despite being a touch cheaper for four. The MLRS is pretty awesome for shutting down infantry with its big Salvo template and each launcher counting as two weapons, but I prefer to focus a little more, so my tanks don’t actually have any artillery support — although thinking about it, two MLRS for the price of another Chieftain might actually be a good idea…