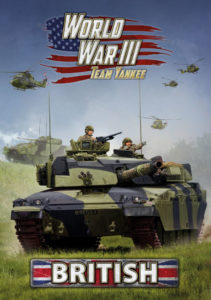 Inside our new British book for World War III: Team Yankee you will find a lot that is familiar for those with the original British book, Iron Maiden. However, we have added a whole lot more including new equipment like Challenger tanks and Warrior infantry fighting vehicles, their units and formations, as well as new support and new background. The first Formation you will encounter is the Challenger Armoured Squadron. This allows to field 2 to 4 Challenger Armoured Troops, with either a Swingfire or Warrior anti-tank unit, a Warrior or FV432 Mechanised Platoon, an Abbot Field Battery, and a Scorpion Recce Troop.

The Challenger was introduced in 1983, and was being introduced to the British Armoured Regiments stationed in West Germany, first with the 1st Armoured Division. It was fundamentally a super-Chieftain, with an improved engine and transmission, improved armour incorporating Chobham composite armour plates, and the TOGS thermal imaging system. 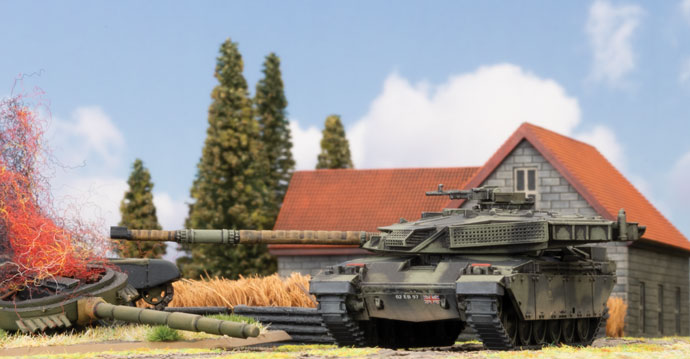 We have also included the option for ROMOR armour, which consisted of explosive reactive armour added to the front hull armour, and Chobham composite skirts in place of the bazooka skirts. This is an armoured package that was developed to apply to the Challenger in times of war to give the tank further protection.

The Challenger still has the powerful 120mm L11 gun like the Chieftain, with its long range and excellent armour penetration.

The mechanised infantry are armed with up to 4 GPMG teams and 3 Carl Gustav anti-tank teams, a 2” Mortar team, and 4 Warriors. Each GPMG and Carl Gustav team is additionally armed with 66mm (LAW) anti-tank weapon. This makes the Mechanised Platoon as good sized unit with plenty of firepower. 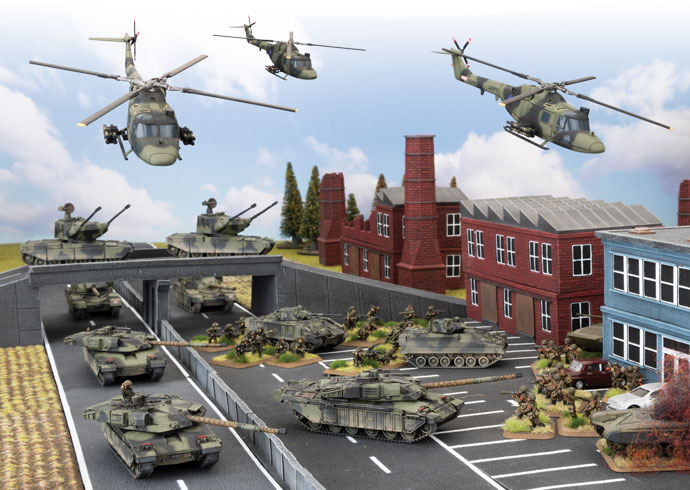 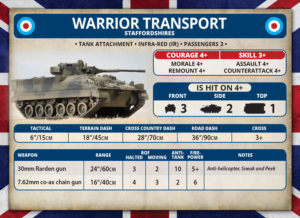 Chieftain Armoured Squadron
The Chieftain Armoured Squadron has a similar organisation to the Challenger squadron, but only has the Swingfire as its anti-tank option. Despite its age the Chieftain is still a formidable tank, and with its Stillbrew armour upgrade is well-protected from many Soviet weapons. The Swingfire Guided Weapons Troop provides the squadron additional anti-tank firepower with its long range and high anti-tank rating.

Like their Warrior mounted comrades they have their own mortar support with the 81mm mortar carrying FV432 APC. These provide them with immediate artillery support.

The FV432 Milan Section adds more Milan missile teams to provide additional anti-tank firepower. The Milan is a very effective medium range anti-tank guided missile with a range up to 36”/90cm and an HEAT anti-tank of 21.

Medium Recce Squadron
The Medium Recce Squadrons use various Combat Vehicle Reconnaissance (Tracked) or CVR(T) vehicles, including the Scimitar, Scorpion, Striker, and Spartan APC. These light vehicles are idea for probing the enemy’s positions. You can use the Spearhead ability of the Scorpion and Scimitar to infiltrate your main attacking force forward. With the 30mm Rarden of the Scimitar or the 76mm gun of the Scorpion they have enough firepower, or smoke in the case of the Scorpion, to extract themselves for any sticky situation they encounter.

Infantry is provided to the squadron by the Spartan Support Troop which mounts 4 GPMG teams with 66mm anti-tank weapons in 4 Spartan CRV(T) based APCs. 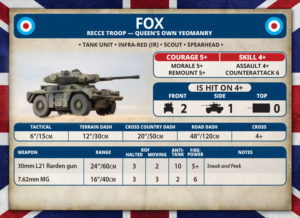 Wheeled recce Squadron
The new Fox armoured car is a reconnaissance vehicle based on many of the design principals as the CRV(T), but obviously wheeled rather than tracked.
The Wheeled Recce Squadron has 2 to 5 Fox Recce Troops and a Spartan Support Troop.

The fox is lightly armoured, but is armed with the excellent 30mm Rarden gun. Support Units
The British have a good selection of support units that include artillery, anti-aircraft weapons, and aircraft.

The new MLRS Medium Rocket Battery provides a powerful salvo rocket weapon. To represent the saturation that this devastating weapon system can lay down on its target area each MLRS counts as two weapons when firing a bombardment. They can also fire Minelets to seed a minefield on the tabletop.

To guide these and other British artillery systems on to their targets you can take a FV432 FOO. This specialist observer improves your chances of Ranging In.

Another new Unit is the Chieftain Marksman AA Battery. This was an anti-aircraft turret developed by the British company Marconi as an export weapon that could be fitted a variety of main battle tanks. We have the British adopting the Marksman to fit to the Chieftain. The Marksman turret is armed with a pair of 35mm guns, the same weapons as the West German Gepard. It also as a similar radar system for tracking aircraft targets. To destroy tanks from the air the British also employ the TOW Lynx HELARM Flight. The Lynx HELARM is armed with the American TOW anti-tank guided missile with an HEAT anti-tank rating of 21. The Lynx HELARM uses the Hunter-killer rule that allows it to use terrain for concealment and remain Gone to Ground unless it shoots.

The final support unit is the Harrier Close Air Support Flight. The Harrier can take off from very short runways, allowing them to operate from car parks and highways. This translates into them turning up on a 3+ rather than a 4+ when your role for Strike Aircraft as they can be stationed closer to the front line. They are armed with cluster bombs, giving them a Salvo template for their bombardment, and a 30mm Aden gun.

Changes
A major change from Iron Maiden is that you can now take a Combat Unit from a Black Box as a Support Unit for your Force. Of course this is only if you haven’t already got one of these units in your Force already in one of your Formations (see page 79 of World War III: Team Yankee)

Added to all those great models we have also replaced the metal and resin M109 SP Howitzer and Harrier with plastic kits. 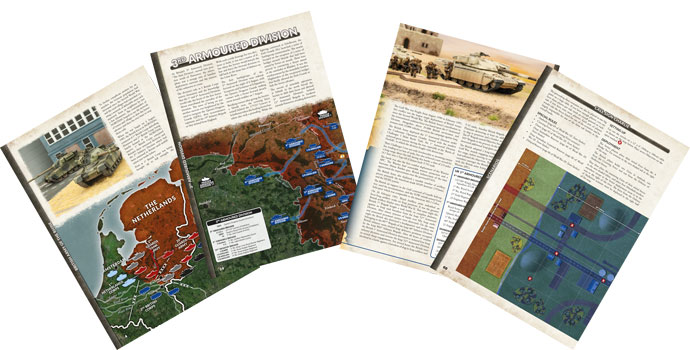 Other Content
The book is packed full of additional background for World War III, the development of the Challenger, and a brief history of the British in the 1990 to 1991 Gulf War.

We have expanded our history of World War III to include the exploits of the 1st Armoured Division during the opening weeks of the campaign as the fight to hold the advance of the Soviet 35th Guards Motor Rifle and 7th Guards Armoured Divisions.

We also include three British World War III scenarios and a multi-player mega-game scenario to end the scenarios played as a campaign.

There is plenty inside World War III: British to interest existing players and those new to the British and the world of World War III: Team Yankee. Enjoy!