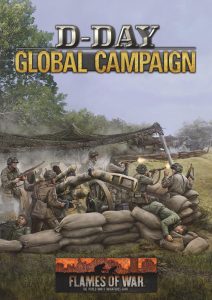 This week we take a closer look at the D-Day: Global Campaign Battlefront and the crew over at OnTableTop are running later this year. We have done several campaigns with OnTableTop in the past for Team Yankee and those who played in those will recognize this campaign- even though there are a few key differences. The campaign itself will have players fighting their way through the battles of Normandy taking over Routes and securing Areas that will earn their side a bonus when fighting in that route during the next week.

The online part of the campaign will link gaming communities from across the world together to fight over a global map. Along with recording your games and adding your side’s victories you can also write up your battle reports and share them with the online community, earning cool achievements and giving your side even more of an edge. 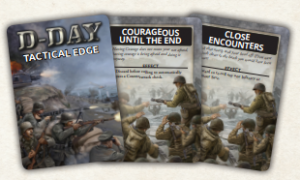 Did I say edge? Well, here is a non-obvious segue way into talking about Tactical Edge cards! Those who are participating in the Hobby League you will earn Tactical Edge cards to use during this campaign. These cards give you a one use boost for any game you play during the campaign, giving you an “edge” in your games. If you didn’t take part in the Hobby League then you don’t have to worry about these cards, unless your opponent has, then be afraid! Be very afraid!

Just kidding, the cards are cool and have cool effects, but none of them are game-breaking on their own, so if you don’t have them and your opponent does it’s not the end of the world.

Well that’s it for our first look at the Global Campaign, later on we will go even more in depth on what’s in the campaign kits and we will go over how the campaign will work. For now why not join in the global discussion over on our Facebook forums and let us know what side you will be representing in the global campaign.