Last year we ran two tremendously fun Firestorm Campaigns for Team Yankee. This year we have one planned for Flames Of War players. Welcome to Firestorm: Stalingrad!

Firestorm: Stalingrad recreates the fighting in and around the city of Stalingrad where the Germans and Soviets fight over every factory, building, and city block, whilst outside the city the Soviet attackers drive
to encircle the city, forever cutting off the German Army. 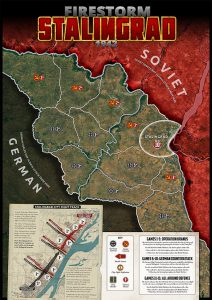 The Campaign pack will be available shortly and is designed (much like the previous Team Yankee versions) to be played over the course of a day as a single event, or over a series of nights or club days.

The campaign consists of a series of Flames Of War games in which players attempt to capture areas from the enemy or recover those lost in earlier games.

Each time a player attacks they place a marker on the map, once all the markers have been used the campaign is over and the side with the most victory points wins. 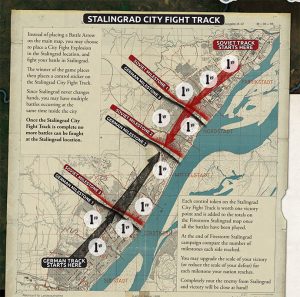 Unlike previous campaigns the winner is not solely determined by taking sectors, or areas. This time players will need to be mindful of what is happening inside Stalingrad itself!

By capturing the city, a defeated side may be able to swing the final result, potentially turning a defeat into victory!

There is no point breaking the German 6th Army if the remaining troops inside the city have turned it into Fortress Stalingrad, dug in and prepared to hold off any attacking Soviet force…

Stay tuned for more information on the Flames Of War website about how your club or store can get a copy of Firestorm: Stalingrad, or…