Returning to the Eastern Front is a pretty exciting time for the team at Battlefront and in my case, it is a chance to revisit the book that made me fall in love with this theatre, Stalingrad.

Back in 2005 the Battlefront team produced Stalingrad and it was filled with fantastic miniatures and some amazing custom-built terrain. Up till this point I’d never really had much interest in the Eastern Front, having been more interested in Normandy to Berlin in the west, but this was the book that changed everything. This was the book that made the human wave of Soviet infantry look like fun…

Fast forward 13 years and we get to return to Stalingrad (and the rest of the Eastern Front) with Iron Cross and Enemy at the Gates. For me this means a chance to put a wall of humanity on the table and have them charge headlong into the guns of my opponent. Watching your troops get mercilessly gunned down might sound a little heart-breaking but the payback comes when your troops hit the thin red (or is that German Grey) line of enemies. Much like a tsunami there is no stopping the Soviet horde.

Needless to say, the army I’ll be dusting off starts with a Rifle Battalion HQ and two Companies of infantry. I’ve picked the ‘small’ 20 team versions to leave me some points to add a Penal Company of another 20 teams to the core of the army. These cowards will form the ‘forlorn hope’ of my army and take this opportunity to redeem themselves at the forefront of my army. My opponents can choose to gun them down knowing that they won’t pick up a Victory Point for doing so, or can ignore them at their peril.

With the wall of humanity taken care of it is time to add some support elements to my force. Since I don’t have any Flamethrower teams to pin down the enemy I’ve chosen to add two units of mortars and a unit of machine-guns. The reason for this is fairly simple, I feel like they are good bang for buck coming in at 11 points for the three units. I can also position one unit of each flank where they can dig in once they get to a good firing point as they will probably need to self-observe their fire.

So putting this aside I decided to stick with some more gun teams, adding in a battery of 76mm guns for artillery and improvised anti-tank work, along with a Heavy Tank-killer Company of 57mm guns. The 57mm guns are seriously nasty, having a range of 28”, Rate of Fire 2, and Anti-tank 11. These will have no problems slicing through enemy Panzers. Best of all they are rated as Careful and are hit on a 4+, with a 3+ save. Assuming they are concealed and Gone to Ground this means they should survive the inevitable alpha strike as enemy Panzers make a rush at them.

With a whole 7 points left I’ve added a Scout Platoon. They are purely there for their Scout and Spearhead rules. If you have every tried to fit 40+ infantry teams and support weapons on one flank in a game you will know how important it is to try and expand your deployment options.
My plan is simple, attack, attack some more, then rally what is left and attack some more. 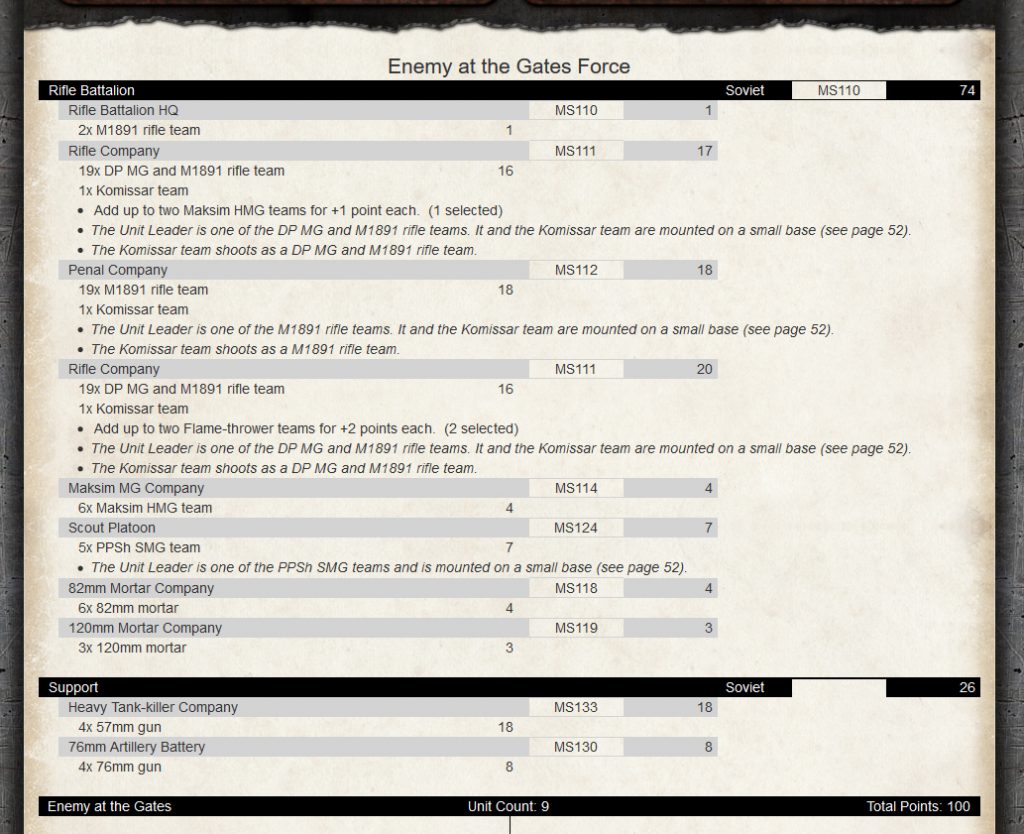