I’m currently starting a new force from D-Day: German, the Fallschirmjäger StuG Assault Gun Company. Instead of having it themed for Normandy, I’m using it to represent Fallschirmjäger & StuGs in the Italian Campaign.

First I primed the figures with a black rattle can. Then to speed things up I airbrushed the figures Khaki. This gave me a light base colour to work over rather than trying to paint beige / tan over the black primer. It also meant I could drybrush on the German Camo Beige for the smocks to create initial shading. Then I simply block painted all the items, trying to be as neat as possible.

This step is simple as I just cover the entire figure with Black Wash. This darkens everything quite a lot, but I like the way it defines all the elements. It also makes it easy to re highlight with the same base colours without having to find lighter shades.

As mentioned above, I generally go back with the base colours and highlight the raised surfaces of everything. Then I sometimes do a second highlight with a different colour on some items.

See below for all the colours I used, but feel free to experiment with your own: 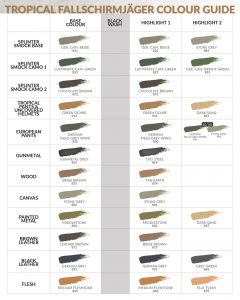 A simple way to achieve a worn leather look on straps and bags is to gently dab the edges with a lighter colour. It’s like an edge highlight but the dabbing action gives it a more irregular, worn look.

Now that I’ve figured out my colour choices, I’ve got a lot more figures to paint, and also all the StuGs! I think the platoon will look quite interesting with it’s mix of yellow and field grey pants, and the yellow un covered helmets.

Speaking of uncovered helmets, one last tip: Sponge on some German grey to show the yellow paint chipping off.