In 1975, the AH-64 Apache helicopter was born.  It made it’s first flight as a prototype that year and by 1976, a full development contract was started. It was created as a replacement for the AH-1 Cobra and was built to be extremely tough in combat.  It came equipped with night vision and other technology that helped support ground troops. 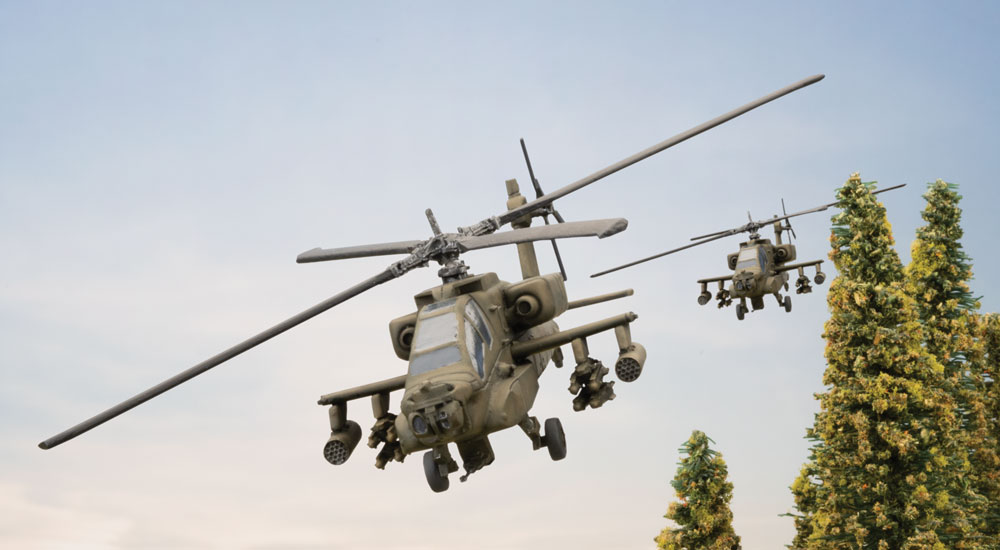 While it is heavily armed, it remains highly maneuverable in combat.  Over the years, it has proven itself to be the backbone of the U.S. Army’s all-weather ground support team.  It has continued to see advancements as time has passed to make it easier to maintain as well as more difficult to take down when the times get tough.

The technology used to weaponize this beautiful bird of prey makes this a must have when building your new American army for World War III: Team Yankee.  With its 30mm M230 chain gun and 1200 rounds of ammunition, the chopper was already a force to be reckoned with even before adding 8 Hellfire missiles and 38 Hydra 70 rockets.  You can tell your opponents to pack it up before they even start once you bring this bad boy into play along side the brand-new Bradley troops.

With unlimited movement and dashing ability in game, you can be sure that your enemies won’t know when or where your attack is going to come from.  The Hellfire missiles are laser guided and the chain gun is perfect for taking out armored targets, whilst the rockets and chain gun are excellent for dealing with softer units. 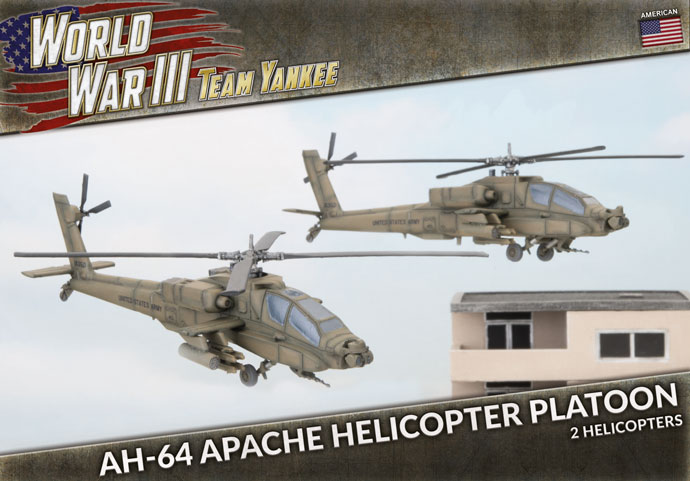 Be sure to get your hands on the new Apache platoons when they hit shelves to ensure your opponents are left in the fetal position crying out for their mama by the end of the game!  Catch you on the battlefield my friends.

And if you still don’t think that the AH-64 Apache is the coolest thing to hit World War III, then you clearly need to go and watch the Nicolas Cage movie, Fire Birds! It’s Top Gun but with more Apache and less volleyball.

Join Chris as he gets excited about the contents of the new WWIII: American Starter Army Deal.

With so many great models in the new WWIII: American book it can be easy to loose track of which one is which, so check out this video to help identify what models you might need to buy.

We asked for you questions on World War III: Team Yankee and specifically the new American book. You managed to ask some fairly curly questions so Alex sat down with Wayne to answer them…

Welcome back to World War III, the war continues…

Over the next 12 hours we will be sharing a pile of content from the Battlefront Miniatures team, along with some great articles and videos from some of our regular contributors.

You can expect to see:

Now to get things started, you can head over to the Flames Of War Digital App, or the Forces website and start thinking about how you are going to update your existing army, or begin a new one whilst you check the rest of the content coming soon…

You can find out more about the  Flames Of War Digital App here…
Begin army building here with WWIII: Team Yankee Forces…