With the launch of Bagration: Soviet a lot of the upcoming focus in Flames Of War will be centred on the Festerplatz– the fortified cities that Hitler had set up while the German forces were in retreat from late 1943 until the Allies finally entered the German heartland.  These cities were converted with bunkers, fortifications, minefields and dozens of other cunning defensive measures.  The intent was for the Russian advance to be stalled against these cities so the Red Army could be pinned down and counter attacked by Axis forces.  In truth the Festerplatz strategy did not work well.  Frequently the cities were surrounded, lines of supply were cut and the inhabitants had to fight in prolonged sieges with no hope for victory.  This history, though grim, makes a great topic for us to use the Flames Of War City Fighting ruleset.  So, if fighting house to house in desperate close quarters among the ruins of a great metropolis sounds like a fun challenge (In 15mm scale, not real life) read on!

The City Fighting rules for Flames Of War were introduced for Mid-War in Enemy at The Gates.

You can check out the rules in Mikes article here…

If you have not used these rules I encourage you to check them out.  The City Fighting rules are a small addition in terms of pages of instructions, but add a tremendous new level of tactics and weapon effects to the game.  In my regular games group, we enjoy these rules so much we switched to the City Fighting City Building rules for every game that has buildings in it (which is all of them)! 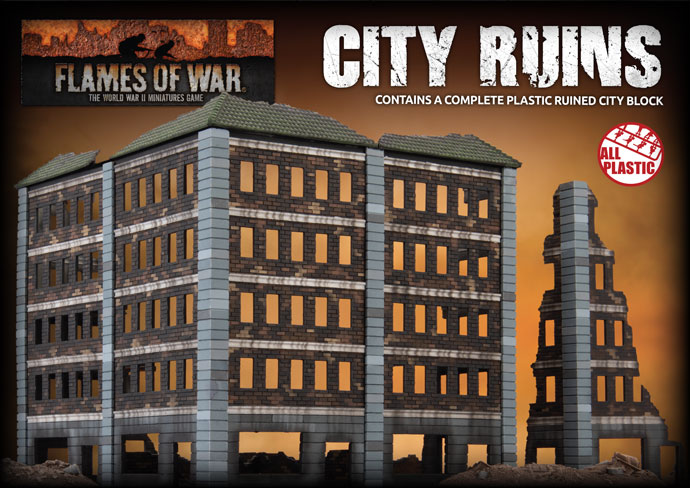 I hear you say “this sounds good but I don’t have any city ruins or buildings in my terrain collection.”  Don’t worry…there are a large assortment of options made for Flames Of War and the new City Ruins boxed set has just been released.  It has enough terrain in it for an entire city block (I will be getting back to this in future articles)! This amazing set, which is great value, will let you get playing in the concrete hell of urban warfare fast. 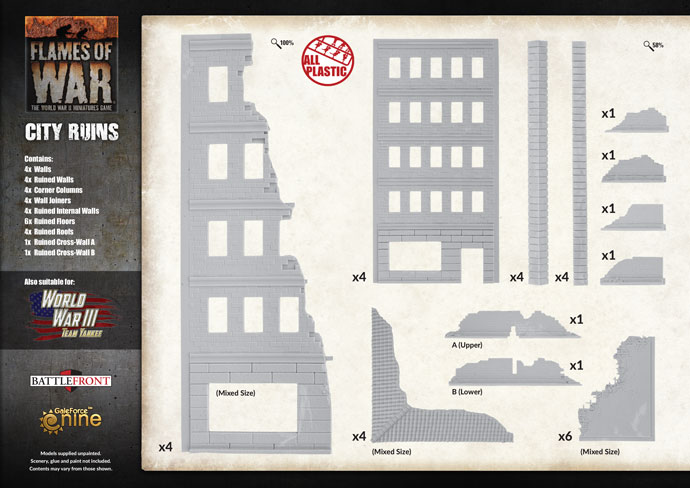 So how does City Fighting work and what is different?  Let’s take a look.

Fighting in the Streets

First of all, cities have streets and in a war zone the streets are cluttered with rubble and made of concrete and brick.  This means City Fighting is often done entirely in difficult terrain and troops cannot dig in.   This presents a host of new and interesting tactical options where cover is not as easy to come by in the open.

Buildings in urban areas can be huge, which requires some different rules.  Within a City Fight building you can have several “rooms” which also extend upwards encompassing any floors overhead.  When battling in these buildings you need to move and fight room to room and it is possible to have several units from both sides fighting to occupy a building!  Because of the nature of the close and cluttered conditions inside a building, bulletproof cover and concealment abounds and assaulting teams can claim bulletproof cover when they charge!  I think it is needless to say assault-oriented troops become crucial in urban battles.  If you enjoy the decisive brutality of the assault step in Flames Of War, then the City Fighting rules are sure to become a favourite for you!

Artillery is always very important in your plan to achieve victory and it remains the same in City Fighting but with some minor differences.  Because buildings are enclosed spaces, rather than attacking everything under a template, the target is selected by room (and also adjacent rooms for Salvo weapons).  The most drastic effect on artillery however is the likelihood that you will want to use a lot of direct fire from your big guns because of how the Brutal rule works with city buildings (see below).

As World War II ground on it became quite common for commanders on all sides to bring in the big guns and howitzers to simply demolish buildings with the enemy inside them!  In Flames Of War City Fighting this means that when anything with the Brutal rule causes a hit you add a further 1d6 to the number!  A brutal weapon when it hits could actually cause damage up to 7 times!  If you find your Brumbars, AVRE Churchills, Sherman 105s and 122mm canons sitting out of games don’t worry…they are about to become very important!

The devastating effects of flame throwers probably don’t need much explanation.  In the close spaces of the city where cover is everywhere, rerolling saves and auto firepower becomes so effective that you will want a healthy dose of flame throwers in every army. I know I always take the Demolitions Experts command card on my American Rifle platoons (which replaces 1 rifle stand with a flame thrower) and if you have any Churchill Crocodiles you will want to bring them along!

Though the City Fighting rules can easily be added to any game of Flames Of War, some scenarios, usually played on a smaller board size, are available for urban warfare.  This tend to be a very aggressive fast paced type of game which might be a nice change from the long-range slug fests that can sometimes play out.  Also, because tanks are limited in their maneuverability in cities, building army lists for City Fighting can become quite different from regular games.  More often than not you will want to rely on infantry with tank-based support for your games rather than the other way around! If you are planning any campaigns with linked scenarios I would suggest throwing the odd City Fighting scenario into it to shake things up.

It’s All About the Visuals

I think a great deal of the appeal of wargaming in the Flames Of War setting comes from the highly artistic nature of the game.  There is just something about recreating the real world in 15mm that not only leads to a good game but also makes it a visual work of art!  City Fighting seems to heighten this experience.  Not everyone knows how big a Tiger tank is in real life, but everyone will have a sense of how big a house or storefront is.  This makes City Fighting games seem that much more impressive and involving.  If you don’t believe me create your own city terrain board and see what happens! 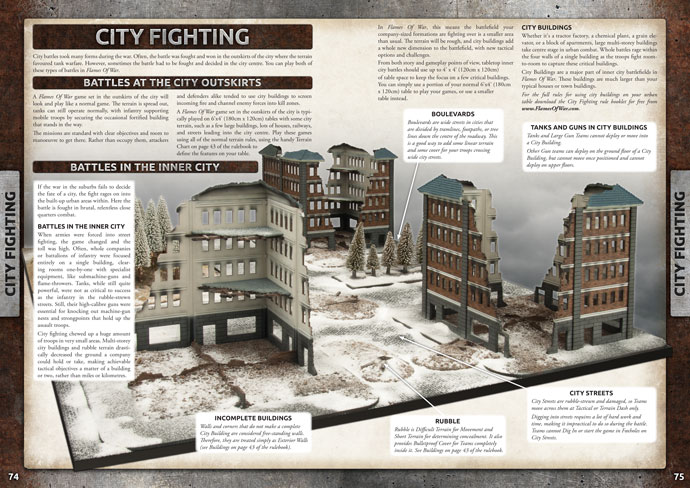 This article is just an overview of how the City Fighting rules function.  The process of doing battle in a congested city centre is a very complex topic with a lot of topics for discussion.  From tactics for your Flames Of War armies, to showcasing the fantastic terrain options available for your games, we have much more to cover.  Watch out for more articles coming soon!

Get Ready for Urban Warfare

If you want to add some variety, alternate weapon effects or visuals to your games of Flames Of War I strongly urge you to check out the City Fighting rules.  With Bagration: Soviet and new terrain sets launching soon, these will pair nicely with the historically themed city games you will want to play.  Besides the City Fighting rules give you something fun to do with all of those 122mm, Brutal IS-2 canons we will all be painting!

There is a wealth of content on our YouTube channel, as well as those of some of the great community contributors that can help you build and paint your armies. Some of it may be for previous books, but are still a great resource today. For example…

I am the first to admit that my painting skills rank as mediocre at best. However, the 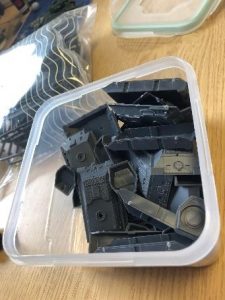 results which I manage to achieve against the battles of children, work and The Wife are more than acceptable for tabletop games. I’m happy with the results and what it looks like, and whilst not ever going to win me any awards, the schemes and methods I use allow me to have a completely painted army to game with, in not a lot of time. Which is key when having so many models to paint with an army such as Soviets!
I might be starting to regret taking so many tanks in my list… There was so much clipping and gluing. 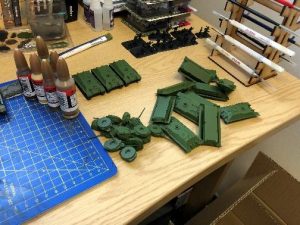 Tanks:
Step 1 after assembling the models and spraying them with a primer, I spray the models again with Tankovy Green for the hulls and turrets. I highly recommend leaving the tracks separate to the hull, as it’s easier to paint the tracks black now and then attach them later rather than risk getting excess paint onto my nicely sprayed, even-tone hulls, when I’m painting all the nooks and crevices. 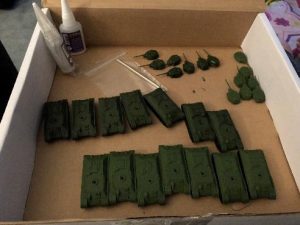 Step 2 I wash the whole tank and road wheels on the tracks with Zhukov Shade, ensuring that none of the wash pools on the tank, but gets into all the details. 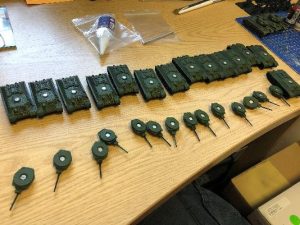 Step 4 is to apply decals anywhere you want them on the tank. Here I have applied them to the turrets. Whilst these are drying I used Boot Brown on the tracks to give them the illusion of being worn and used, over the black base coat.

Step 5 over the Green highlight, as well as the decals to help them blend onto the paintwork, I use Dry Dust as an extreme highlight on the top of the hull and the turret to create an instant bling to the tank.

Step 6 is to paint the exhausts and machine guns Dark Gunmetal. I then drybrush Dark Gunmetal over the tracks, leaving just a little Boot Brown showing through. After the exhausts and MG have dried, I apply a dilute wash of Ordnance shade over them to dull the shine down and create shading on the metal areas.

Step 7 after attaching the tracks to the hull and letting them dry, I complete a final drybrush/a light specking of Battlefield Brown in a random and haphazard pattern around the tracks, road wheels, front and rear of the hull, to simulate road dust and dirt splashes. Step 8 finally, I use a small amount of delicate drybrushing to simulate cordite stains and exhaust stains on the front of the barrel and below the exhausts, with Black from the Quartermaster’s set. This is just an approximation, not exact, but rather to give the impression of.