The country of Russia is vast, and to go with it comes an equally vast army with manpower and a staggering variety of unit types. This gives the Flames Of War player a lot of choice when customizing the infantry in their army to suit their play style, or complement their other unit choices.

Despite this, infantry tends to be overlooked. At first this is understandable because of the amazing selection of tanks and artillery available to the Late War Soviet player, but when you consider that historically the humble ground pounding foot soldier was the backbone of the Red Army, it bears repeating that the Soviet infantry in its many and varied forms, deserves a closer look. With that in mind let’s go over the details about the basic infantry choices in the awesome new Bagration: Soviet book. (Please note that the Engineer-Sapper Company, being very specialized, are explored in their own separate article.)

This is the classic choice for the Soviets. The Rifle Company is characterized by fairly mediocre troops. They have a Skill of 5+ with a 4+ Assault and have a worse save value than most infantry at 4+. They have a 1 die rate of fire for being Halted or Moving and all of the regular options for equipment upgrades (including machine guns, PTRDs and flame throwers). This may not seem very impressive, and on the whole it is a little sub-par for other armies in Flames Of War …then you see the unit size! The Rifle Company comes in units of 15 stands plus a Kommissar, or 22 stands plus a Kommissar and all of these only costs 0.8 points per stand (before Upgrades)! Moreover, as long as the Kommissar is alive, the unit has a motivation of 3+ making them effectively Fearless. So, though this unit is not stellar at any one role, it is not going to be easy to dispatch with a round or two of regular shooting, artillery or assaults. If you are looking for a cheap way to tie up your opponent while you maneuver your more specialized units to seize an objective, the Rifle Company is a good option. Additionally, if you want to play the defensive game you could not have it much better than a 3+ Motivation, 23 stand unit that is dug in and gone to ground. Even with the 4+ save, your opponent is likely to run out of bullets before they can shift the unit off the objective! 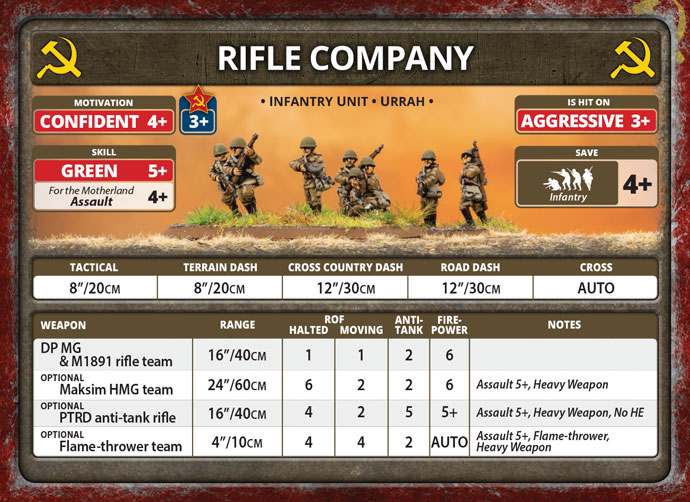 If swamping your opponent beneath a tidal wave of assaulting infantry sounds like fun to you, then the Penal Company is the unit for you. This unit is similar to the Rifle Company in stats, being fairly mediocre, but with an improved assault of 3+ and an amazing motivation of 2+ (while the Kommissar is alive). This specializes the unit for assaults where the 2+ Motivation rating will keep you in the fight (while making Counterattack rolls) and the 3+ rating will let you go toe to toe with most enemies. The Penal Company comes armed with submachine guns, so this unit does not want to be used for defense, and combined with the Redemption rule will be able to make a free move towards their opponents (victims!) before the first round of the game. Lastly, with the Urrah special rule, the Penal Company can charge 6 inches instead of the regular 4 inches of almost every other unit in the game. If you want to get in close to tie up enemy units or overwhelm the defenders on an objective, the Penal Company is what you want. Just remember that due to the Redemption rule they can’t take objectives (but can contest them) and they can never claim bullet proof cover. 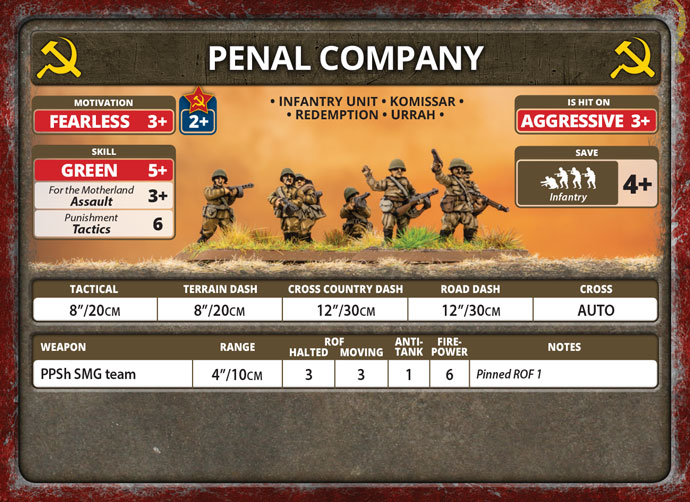 The Hero Shock Rifle Company is a well-rounded infantry choice that splits the difference of quantity with quality. Though not elite compared to other armies, they have very good stats with a motivation of 4+ (3+ with the Kommissar) and Veteran Skill of 3+. They also come in a decent unit size of up to 14 stands and have the whole range of machine guns, PTRDs and flame throwers to choose from for a reasonable point cost of 11 points (before upgrades). This adds up to make the Hero Shock Rifle Company a great choice if you want infantry that is adaptable. They should be solid in both defense and attack. 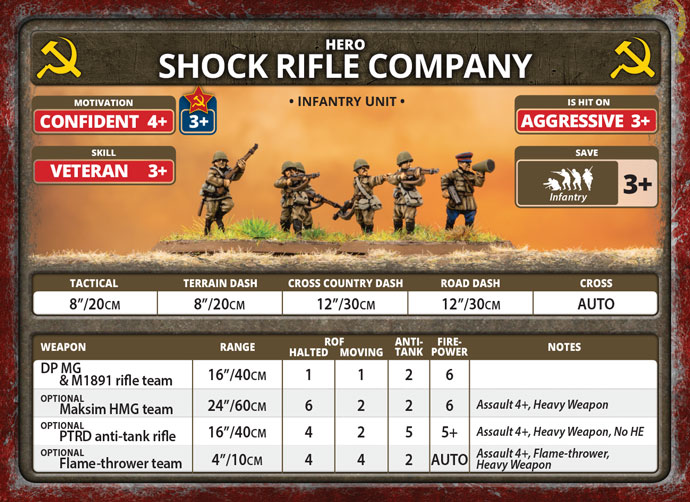 The Storm Group is a choice in the Hero Shock Rifle Battalion Formation, and complements the Hero Shock Rifle Company with a close combat punch. With small unit sizes and a wide range of weapons options, this unit can be tailored to any mission and are more resilient being one of the few Soviet units hit on a 4+ with a 3+ Fearless Motivation. But what really sets them apart is that they have the best assault in the game, hitting on a 2+! Though this unit does not have the numbers to swamp your opponent like a Penal or Rifle Company, they can make surgical attacks and fight in close combat against the most determined opponents. If you want to use a small elite force, the Storm Group is an awesome option. Plus, unlike a lot of the other Soviet infantry choices, the Storm Group can be quite maneuverable on the battlefield as the small numbers of moving troops are much less likely to restrict your avenues of attack and block friendly lines of sight. 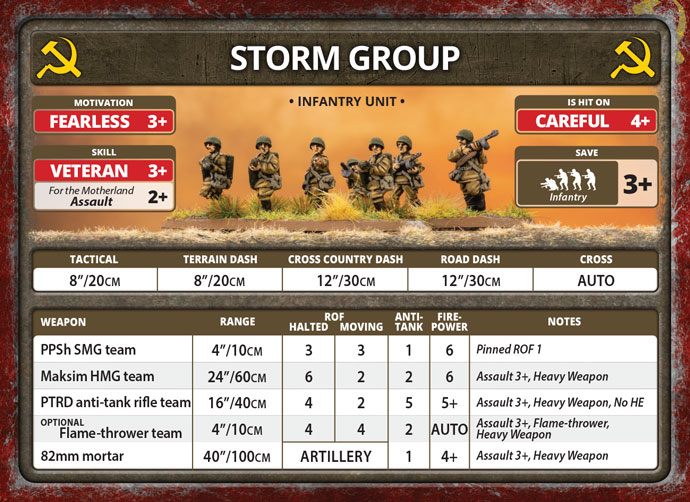 The SMG Company comes in 2 versions Hero and “Regular”. Effectively both versions fill the same role. Both have submachine guns (lots of them) and the option to add flame throwers. The difference is the “Regular” SMG Company uses large numbers (of up to 23 Stands) to make up for their mediocre stats. (They have an Assault of 3+ otherwise they are same as the Rifle Company.) While the Hero SMG Company stresses quality over quantity with stats on par with the Hero Motor Rifle Company (including the 2+ Assault value and Motivation of 3+ due to the Kommissar in the unit) and a unit size of up to 8 stands. In terms of battlefield roles, both types of SMG company provide decent assault troops. Most Formation options allow you to add an SMG Company whether they are infantry or tank based. This makes SMG Companies handy for increasing your Formation break point when you have smaller numbers of tanks in the same Formation and can stay close to your armour providing support against other tank hunting infantry. They are also really useful for assaulting the odd isolated or bailed out tank to finish it off, allowing you to avoid redirecting your precious higher AT weapons off of more pressing threats. 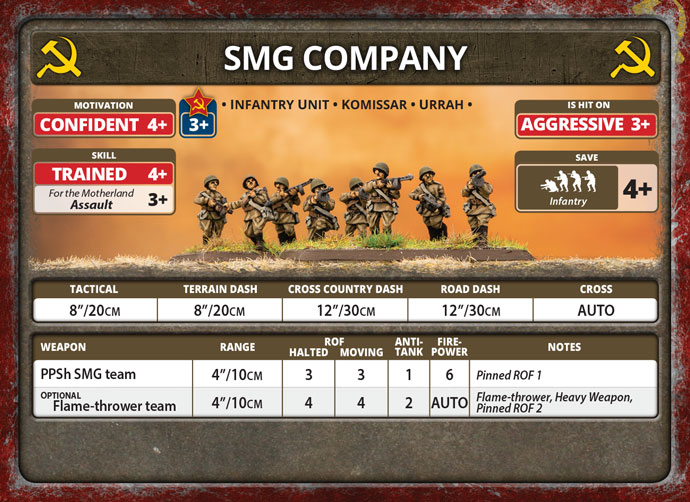 Like the SMG Company, the Motor Rifle Company comes in “Regular” and ‘Hero” varieties. They also compare in that the Hero version is more elite with better stats and a 2+ assault rating compared to the “Regular” version of the Motor Rifle Company. Also like the SMG Companies the Hero version has a smaller number of stands relying on quality over quantity while the “Regular” version definitely goes with the quantity route having a unit size of up to 29 stands! In terms of battlefield roles, the Motor Rifle Company is an excellent ranged fighting option (though the hero 2+ assault makes them more flexible). This is because the unit has 2 dice of shooting either Moving or Halted in addition to being able to take PTRDs and heavy machine guns for upgrades. If you want to throw a mountain of dice in the shooting step, the Motor Rifle Companies are a wonderful option. If you want to be defensive sit a platoon of 29 stands of infantry around your objective and dig them in…. chances are they won’t be pushed off the objective by even the most determined attacker. 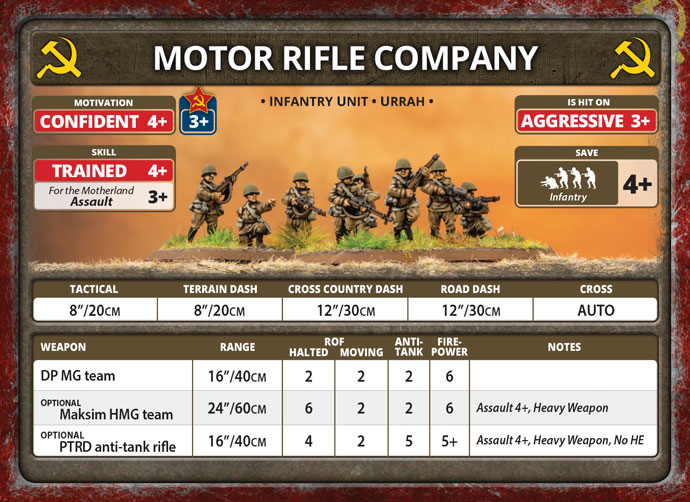 The Reconnaissance Platoon is a very specialized Infantry option. Their stats are the same as hero SMG teams, making them good at assaults, but they can come mounted in a halftrack with accompanying machineguns (. 50cal or regular) and they all have the spearhead rule. (The non-armoured kind also has the Scout rule too.). To make up for these specialized abilities unit sizes are very small with the largest armoured Reconnaissance Platoon coming in at only 6 stands and 3 vehicles total, while the foot slogging version maxing out at only 5 stands! This means these troops though powerful, need to maximize the use of their good stats along with their special rules and transports to attack aggressively and get close enough to do any damage. However, armed with plenty of SMGs, a 2+ Assault and the odd flame thrower this rather specialized unit should be able to hit quite hard and is the ideal choice for creeping up on objectives held by artillery, AT guns or other small units and capturing them with a decisive assault. 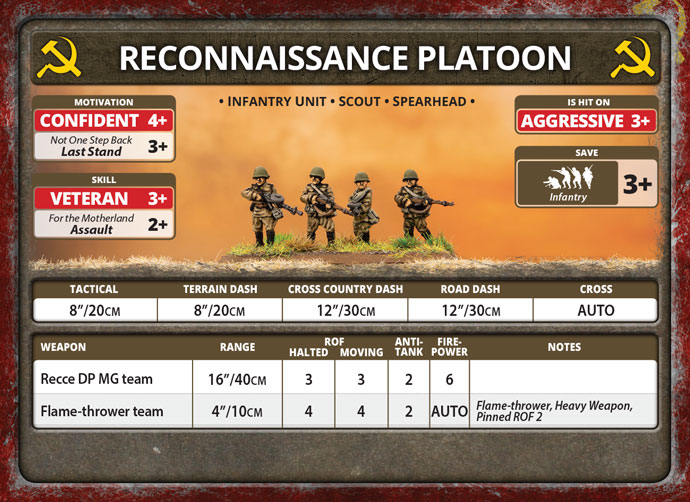 Time to Put Your Infantry on The Game Table

In this brief overview of the staggering number of infantry options in Bagration: Soviet it should be obvious that there is an infantry choice for every tactical challenge you can face. If you want to outnumber your opponents (and enjoy painting troops) then you should consider the Rifle Company, Penal Company or Motor Rifle Companies. On the other hand, if you want an elite or aggressive force, the Reconnaissance Platoon, SMG Companies or Storm Group offers options that can fight in close with almost any enemy. Lastly, if you want a generalist choice that can do some of everything, then you can’t go wrong with the Hero Motor Rifle Company.

Beyond these great options, remember that you can always further refine your choices for your army with Command Cards. By adding these to your force composition you can create an almost limitless variety of refinements from these basic infantry choices. Use your imagination and see what interesting combinations you can create, then go out and show you opponents the true might of the Red Army!