The battle lines have been drawn, the tanks have been fully serviced. It’s time for Firestorm: Kursk.

Firestorm Kursk
Firestorm is back and this time we are fighting around Kursk. Firestorm: Kursk recreates the two-pronged German attack around the town of Kursk in an effort to cut off the Soviet forces in the area. Of all the battles that occurred around Kursk, none quite compare to the battle of Prokhorovka, which ended up being one of the largest tank battles in military history. 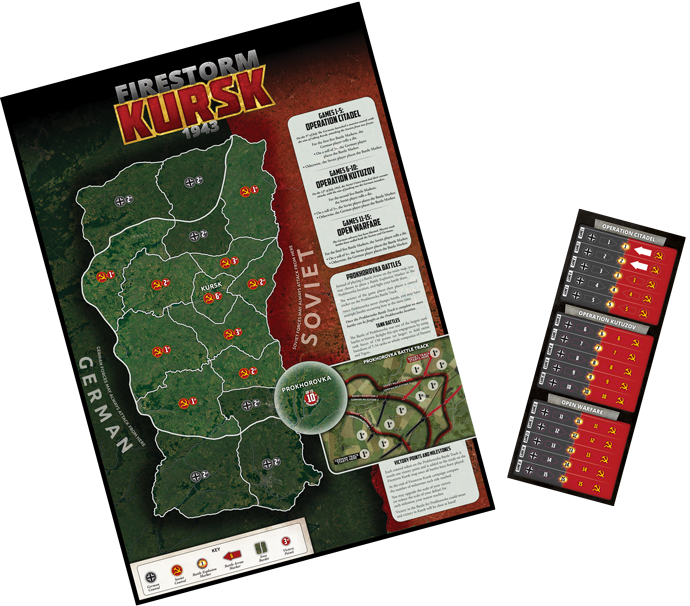 The Campaign
This kit has everything you need to play a full Firestorm: Kursk campaign at your store or club. The campaign will consist of a series of Flames Of War games in which players attempt to capture areas from the enemy or recover those lost in earlier games. Each time a player attacks they place a marker on the map, once all the markers have been used the campaign is over and the side with the most victory points wins.

Battle of Prokhorovka
The 5th Guards Tank Army was one of the most powerful armoured forces fighting in the Battle of Kursk. It was formed in March 1943 from the brand-new 29th Tank Corps and the experienced 5th Guards Mechanised Corps, and gained the 18th Tank Corps as it moved to counterattack positions as the Germans attacked at Kursk. Once in position near Prokhorovka, it added the 2nd Tank Corps, 2nd Guards Tank Corps, and the 9th Airborne Division from the forces that had been delaying the German advance.

On 12 July 1943, this force of over 800 tanks attacked, including more than 500 T-34 tanks, throwing the Germans back in hectic, close-range battles. Phalanxes of tanks charged across the dry steppes, dodging the gullies that slashed the battlefield, crossing through the enemy formations to shoot at point-blank range into the flanks of their tanks. The hills and state farms that the Germans had captured the previous day were littered with burning tanks by nightfall.

Massive Tank Battles
Battle of Prokhorovka being one of the largest tank battles in Military history, makes it the perfect place to play large tank battles. We suggest you play at least 150 point forces with an emphasis on tanks formations. This is the perfect time to pull out every T-34 you have or that large Panther army you been trying to play but was too many points for a standard 100 point game. The 150 points is only a suggestion—got a large Tiger tank company and you want to fight at 200 points? Go for it! The more tanks, the better.

You can also check out Firestorm: Stalingrad here…