Since the launch of V3 and the subsequent army books, I have always been drawn to German armies. This theme continued in V4 with the war in the desert, where I have built a sizeable DAK force.

However, when the UK Sales office decided that we were all to design and build new armies for the Eastern Front books, the way for me was clear – мать Россия! Mother Russia! Going from the German Wehrmacht Army to a Soviet Red Army force, presented some interesting shifts for me; in terms of colour schemes, military doctrines and sheer numbers of models on the table. But mostly importantly (and the crucial swing vote) was the formation organisation charts in Enemy at the Gates army book. 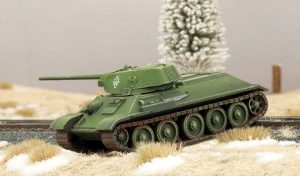 The force which grabbed me as soon as I was able to flick through the book, was the sheer numbers of T-34 tanks I could fit into an army list. I would be the first to admit that I’m a bit of a ‘tread-head’ when it comes to AFV (armoured fighting vehicles or Tanks!) and like nothing better than collecting, painting and looking at rows and rows of iron beasts. However, playing a German force, quite simply there is never enough tanks! And in the T-34 formation, I can take lots and lots of tanks to crush my enemies before me. As with any new list I’m planning on taking, I write out a list without points. This is my wish list. This allows me to go through and like a kid in a sweet shop, choose everything I want that I think looks cool and I think will work to my plans for the theatre.

The Eastern Front is amazing as it has some seriously awesome potential fights ahead of me. From sweeping tank battles around Kursk and Operation Citadel, to city fighting block by block in Stalingrad, and even with the new book, snipers duelling it out amongst shattered buildings. After I had added up my list and realised that there was never a hope that I could paint 22 tanks, with 44 stands of SMG-packing infantry, 4 Anti-Tank guns and a sniper team, I conservatively reduced my list down, mainly to fit within the 100pt force limit the office had set, and also my own painting time-constraints. 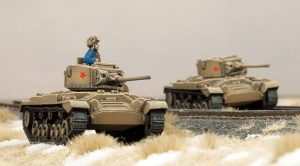 That’s not to say that I didn’t manage to fit in 14 T-34 tanks, 22 stands of Red Army troops as well as some flamers in lieu of the snipers (I think Jonathan or Gareth wanted to be all heroic and sneaky, whereas I prefer all-out assault)  Further I picked up a box of the Valentines for some Lend-Lease tanks for the times that the T-34 wouldn’t be able to match the likes of the specialist German support options. My excuse is we have the Germans on the run and can choose what units to deploy and when… The factories were all uprooted and moved East to ensure The Soviets didn’t lose the manufacturing capability after all.

I planned to paint all the tanks in one batch, so as to ensure some degree of consistency between them as a finished article. Then I plan to tackle the infantry, which are my least favourite part of painting, however something which when done correctly, really stands out.  Tune in for the next article, where I plan to outline my exact army, and the reasons for my choices, followed by my method of painting my Soviets, from idea conception to actually putting paint on the model.