With each release I look forward to seeing what interesting or unique command cards accompany the book and I found several ways to upgrade, downgrade or transform the new Sherman (Lates) and Easy Eights.  So, let’s look at some of the options available to us.  Some of these cards can also be stacked together to give you some more interesting options. 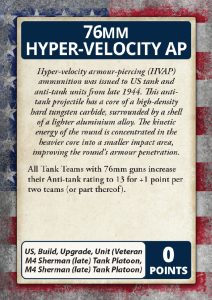 Let’s look at increasing the firepower of our 76mm tanks in the unit first with the “76mm Hyper-Velocity AP” Command Card.  This card allows all teams to increase their AT from 12 to 13.  This can make a big difference – especially as you get two shots on the move with stabiliser and can take on Tigers and Panthers from the front with a bit more certainty.  The cost is +1pt per two teams (or part thereof).  This card applies to a (Veteran M4 Sherman (late) Tank Platoon or M4 Sherman (late) Tank Platoon. 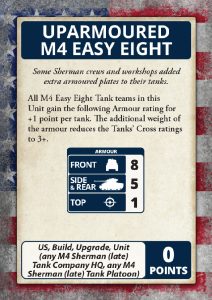 The third card is “Sandbag Armour”, which again, costs +1pt per tank in the platoon.  This card allows you a chance to save against those pesky infantry anti-tank weapons such as panzerfausts and panzershreks.  Especially when you are trying to assault them off an objective!  If a tank fails its armour save against one of these weapons, roll another die and on a 5+ the sandbag armour stops the shot otherwise resolve the hit as normal.  Due to the additional weight of the armour, reduce all tanks dash speeds by 2”.   This card applies to any tank unit.

As these cards increase the cost of your units, you have a couple of options to rein some of those costs back in.  The first is called “M4 Sherman Tanks” and applies to any 75mm armed Shermans in your units.  You can replace the late version M4A3 with the earlier M4A1 version for -1pt per tank.  This applies to any M4 Sherman (late) Tank Company HQ, and any M4 Sherman (late) Tank Platoon. I like to run 76mm armed Shermans and I can see myself up-armouring them to FA8 and sandbags with the HVAP AT13 upgrade.  I would run these in the Veteran M4 Sherman (late) Tank Company Formation where I can also take a Super Pershing and Chaffee’s for speed and HE.   To get some points back I will use the 3rd Armoured Division Spearhead Title Card.  Here is how I might run a 105pt list using these command card upgrades: By using a combination of the above cards, we have managed to create a cool Sherman formation with a Super Pershing for sniping big enemy armour whilst your eight up-gunned and up-armoured 76mm AT13 Shermans are spearheaded into position with HQ Jumbo leading the way to bounce hits.  The Armoured mortars to provide smoke and a template to pin infantry before the assault goes in and the rifle platoon to either support the attack or defend an objective.

I hope this gives you some food for thought around running Shermans and some interesting upgrades, and for the modellers amongst you, to add some custom sandbags or armour to your Shermans!